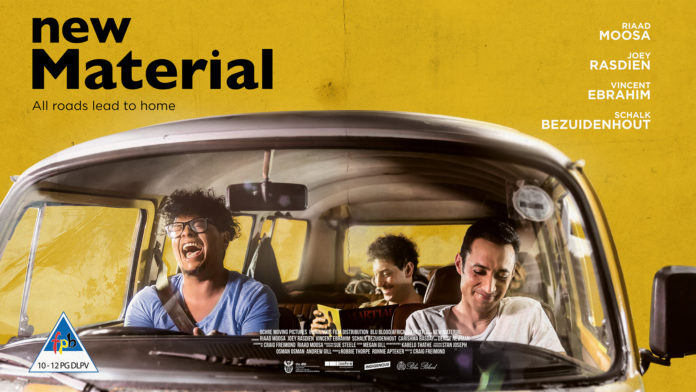 Almost eight years after the release of the first Material movie, comedian Riaad Moosa is back with New Material (pun intended). With a delay of about two years due to the pandemic, the movie is finally out in cinemas from November 26.

Material released in 2012 followed Moosa’s character Cassim Kaif as he struggled between his dreams and responsibilities. He wanted to become a comedian but was stuck dealing with a different kind of material. Instead, he was stuck working in his father’s fabric material shop. His father, Ebrahim (Vincent Ebrahim) wants him to take over the shop. At the end of the movie, however, he manages to find love, get comedic success and get his father’s acceptance albeit reluctantly.

Now in New Material, Cassim is married with a child. He has found relative success with his comedy but still feels stuck. He is tired of performing for the same audiences. His wife Zulfa (Carishma Basday) also wants them to move out of his parent’s home. With all that happening, Cassim asks his friend/manager Yusuf (Joey Rasdien) to level things up for him. Along with the support of the somewhat dodgy Laudim businessman Shabir Sulabie (Rajesh Gopie), the pair go on a tour. They are accompanied by Hendrick (Schalk Bezuidenhout) on a tour of the small South African towns.

The script for the movie was originally written by Moosa in 2015. He then handed over the script to Craig Freimond (director) and Robbie Thorpe for editing. Speaking to The Daily Vox during the premiere, Moosa said as a comedian, he is used to immediate reactions. It was for that reason that waiting for so long for the movie to come together was challenging. However, he said he hopes that people enjoy the movie and see the importance of the message.

New Material has much of the same emotional intensity and hilarity of the first movie. It is filled with moments of hilarious slapstick comedy. Some of them might be slightly unnecessary like a certain scene in the hotel with Cassim and an ironing board. However, for the most part, the comedy hits all the right points. There are a number of scenes of Cassim, Yusuf and Hendrick driving around in a bright yellow kombi that makes for entertaining watching. Bezuidenhout told The Daily Vox he enjoyed filming those scenes the most. He said a lot of those scenes were ad-libbed as well.

However, much like the first one, what makes the movie truly memorable is the quieter, more heartfelt moments. Even though there aren’t as many scenes in this movie between Cassim and his dad, each one is beautiful to watch. Their chemistry is probably the best in the movie. It is also from Ebrahim that the message of the movie shines through. The tagline of the movie is “All roads lead to home”.

Ebrahim tries to teach Cassim that no matter how much fame he gets, it is important to remember your roots. More than that it is your community and family who mould you. At times, Cassim seems to be forgetting that in his quest to be successful and make a name for himself. The movie wraps up beautifully with a tribute to Fietas as a close-knit community which was torn apart. It would have actually made the movie a lot more powerful if there was a greater focus on the Fietas story. In fact, the juxtaposition between the father’s scenes visiting Fietas and Cassim on the road touring were a little jarring at times. However, the history element was a nice, unexpected addition to the story.

Given the ongoing pandemic and the devastating loss many families and communities have faced, New Material is a heartwarming, simple story. It’s also a family friendly movie to enjoy on a night out.

Material is available to watch on Netflix. New Material will be playing at select Nu-Metro cinemas from November 26.