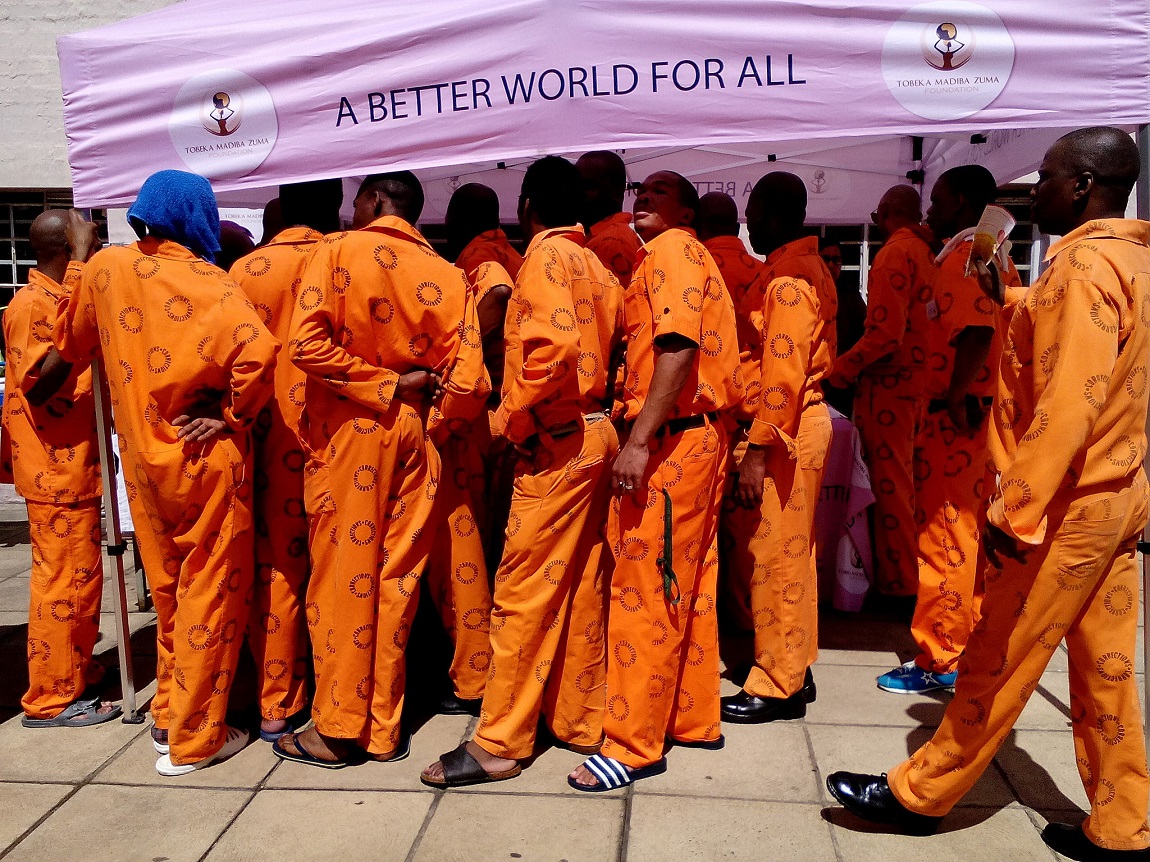 The Department of Correctional Services (DCS) launched the 2015 revised version of the Standard Minimum Rules for the Treatment of Prisoners, also known as the Nelson Mandela Rules in celebration of the stalwart’s centenary late last month. The internationally adopted rules act as guidelines for the establishment of humane prison conditions. While the publicity is a step in the right direction, not enough is being done to fix the problems of human right violations in South African prisons, write NKOSIKHONA KUMALO and JANESSA ANDIORIO.

The correctional services minister Michael Masutha, spoke at the launch last week Tuesday, saying drastic measures were needed to relieve prison overcrowding. He added that government is considering the release of accused people in remand who could not afford bail, as well as those accused of non-violent crimes like sex work.

Prison overcrowding leads not only to the spread of diseases, such as tuberculosis, but also to violence, neglect and prisoners sleeping two or three in a bed. According to an Africa Check and Wits Justice Project (WJP) factsheet published in 2017, South Africa’s prisons only had around 119,000 bed spaces, but an inmate population of around 160,000. Prison facilities are also outdated and dilapidated while allegations of assault, torture and abuse behind bars shroud correctional services.

The Nelson Mandela Rules are the United Nations (UN) guidelines to ensure that prisoners are treated well and their dignity is respected world-wide. There are 122 rules, divided into different categories from sleeping conditions to solitary confinement.

However, there is no promise that the launch of the rules here in South Africa will change how prisoners are treated.

The rules were originally adopted by the United Nations Congress on the Prevention of Crime and the Treatment of Offenders in 1955. Then they were approved by the UN Economic and Social Council in 1957. Finally, in 2015 the rules were revised and referred to as the Nelson Mandela Rules to honour the late President of South Africa because of the years he spent in prison. The UN decided to revise the rules to “reflect recent advances in correctional services and best practices.” Eight main areas covering human rights were changed – including the prohibition of torture and placing the responsibility of a prisoner’s healthcare on the state.

The WJP took to the campus of University of the Witwatersrand (Wits) to ask students and staff what their thoughts are on the rules. After interviewing several people, it became clear that most had no idea what the Mandela Rules were. Only some were able to say how the launch may influence South African prisons.

“I think that would make a difference, I really think it would help South African prisons if they were applied,” says Sehlule Nkomo, a Wits alumni and legal consultant.

Nkomo – who has a friend in prison – knows what kind of issues prisoners face when they enter life behind bars.

“I’ve visited prisons and you’d find out that there is overcrowding [and] there are people that are not treated properly,” says Nkomo. On the other hand, Nkomo says change will only come once prisoners are educated about the Nelson Mandela Rules, “[Prisoners] will start reporting the cases when they understand the Mandela Rules because you actually find that people don’t report their cases in prisons” said Nkomo.

The Price of a Criminal Record

Egon Oswald, a human rights attorney, says the launch could be a media event or window dressing to honour Mandela so close to Mandela Day. He is hopeful, however, that the launch will lead to more than just short-lived media attention for the DCS.

“It’s a very good thing, [but] whether it’s going to lead to something in the future – that we will have to wait and see”, says Oswald.

Oswald points out that the abuse and human rights violations in prisons stem from ineffective leadership within correctional services. He says there needs to be well-trained staff running the prisons for the conditions to improve.

Singabakho Nxumalo, spokesperson for DSC, explains that the rules are not a legally binding international agreement. They are not meant to tell nations how to run their prison systems.

“They seek only to set out what is generally accepted as being good principles and practice in the treatment of prisoners and prison management,” says Nxumalo.

Nxumalo says the rules are “a new beginning in a long journey of implementing human rights.”

Whether the launch will be DCS’ way to simply honour Mandela, create public awareness for human right violations happening in South African prisons or a way to educate prisoners of their rights – is a tricky question.

“We have wonderful policy measures”, Oswald said. “And now we have one more piece to add to it – whether it will work, only time will tell”.

Nkosikhona Kumalo and Janessa Andiorio work as journalists for the Wits Justice Project.

Featured image via the GCIS