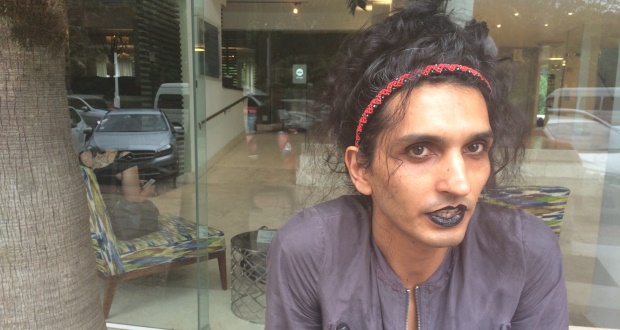 NIKHIL SINGHâ€™s debut novel â€œTaty Went Westâ€ was described by Lauren Beukes as â€œa hallucinogenic post-apocalyptic carnival rideâ€. Heâ€™s writing 13 other novels at the moment, and heâ€™s determined to shatter stereotypes. Dana da Silva caught up with him at the Time of the Writer festival.

The theme of this festival, â€œDecolonising the bookâ€, is a bit ridiculous but itâ€™s vaguely entertaining. Well, itâ€™s kind of like jumping on a bandwagon. Secondly, the only tribe that was not a colonising tribe was the San. Every other tribe in Southern Africa has been a colonising tribe. So thereâ€™s almost like a pointlessness to it. I also like how it can really be explored if you get into decolonising, which is removal of all kinds of cultural stigmas and get back to a kind of harmonising of the land and with the energies, and which have nothing whatsoever to do with the kind of political system, race or cultural identity which I think is true decolonisation. I donâ€™t think people are really interested in [that].

Thereâ€™s a lot of sci-fi being written, but itâ€™s not accepted by publishers generally. Iâ€™ve been to a few festivals where theyâ€™ve been talking about African futures and futuristic African things and there are a lot of things that people are pissed off about and one of the things is that most Western mainstream audiences donâ€™t understand Africa. They feel they need some sort of entry point into the narrative that has some political narrative or social or historical or racial context. And the fact of the matter is that Africa is just really a place, a place like everywhere else. And you can have an experience that has absolutely nothing whatsoever to do with those things.

AÂ lot of the science fiction or futuristic things that people have written in the underground that Iâ€™ve come across, theyâ€™re like that. Theyâ€™re not really placed in Africa. If youâ€™ve lived here and youâ€™ve read it, youâ€™d know it was here. But because a lot of people think an audience might not relate to that, they push these sellable stereotypes. I have a problem with that. Iâ€™m really against it and Iâ€™m going to do something about it. And Iâ€™ve done it.

I like that people can interpret a book the way they feel it should be interpreted. My view is not really the definitive view of it even if I wrote it. Itâ€™s still something thatâ€™s explored by the person whoâ€™s reading it so they can decode it however they like.

Sci-fi tends to concentrate on the sort of masculine stereotypes where you have a forceful character and somehow their forceful character is the thing that drives the narrative. ClichÃ© is too obvious a word. It falls into a homogenisation of science fiction. And people donâ€™t really treat female characters as characters. They are just sort of textures or objects. And I donâ€™t want to say Iâ€™m a feminist because thereâ€™s also a stigma that comes with it. But at the same time, thereâ€™s a lot of things about feminism that I align with and I thought it would be interesting to have a really unreal world and a normal girl. Sheâ€™s not some superhero, sheâ€™s actually really terrified. But sheâ€™s really stubborn, sheâ€™s there because she wants to be there. Sheâ€™s going to stick it out and all sorts of terrible things happen to her and I didnâ€™t want to sugar-coat that either. I didnâ€™t want to be gratuitous about it but itâ€™s something we donâ€™t talk about in Africa. I mean thereâ€™s a lot of nasty stuff that happens here and they put it in patinas and look for the deeper meaning of rape and murder. But I wanted to treat them more as real things; the real effect that those things have on people.

I used to go to high school in two different places. I went to Hilton and Tongaat. Iâ€™d been there as child but I was really blown away by the jungle and you always think thereâ€™s dinosaurs and stuff, but thereâ€™s also like this futuristic effect. I used to collect a lot of old science fiction novels and theyâ€™re always airbrushed. Thereâ€™s always a patina of rust around the horizon that blends into a jungle landscape and thereâ€™s often weird structures in the haze and Durban looks exactly like so when I was a kid everything looked like this science fiction book cover.

For me, the North Coast has always been futuristic so I wanted to write something set in that world but not placing it there. Because I donâ€™t like names, I donâ€™t like situating things. I really hate that actually, so for me it was a special place, it had a magical aspect. So the science fiction thing was going back to when I was a teenager when I had these science fiction feelings. Because I had been writing a lot of stuff that was serious and I wanted to get back to that nostalgic science fiction theme which Durban is. Thatâ€™s just my experience.