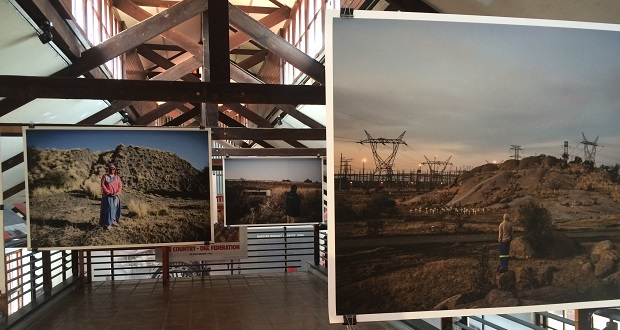 Voices from Marikana is an exhibition being held at the Worker’s Museum in Newtown in collaboration with Amnesty International that presents photographs taken by Paul Botes together with text by freelance journalist Niren Tolsi of the widows, families and friends of the men who died during August 2012. We caught up with Tolsi to talk about the project.

This exhibition is just a part of a longer term project that Paul Botes and I have been doing since December 2012, which is following the aftermath of Marikana and all 44 families who lost loved ones at Marikana.

I think it actually started when Paul went to the funeral of Molefi Ntsoele, who was a miner who was killed on August 16. He lived outside Diputaneng, in Lesotho, which is a very remote area and you can only get there either by walking or on horseback because it’s high up in the mountain in Lesotho. I suppose you’re struck by the physical distance that the family were from getting any reparation from government, from the company.

There is very little focus on Marikana in the mainstream media, or any narratives that humanise the events that were to follow. What happened to the people who were most affected, who lost loved ones at Marikana, to those 44 families of the 34 killed on August 16 and the days before? There has been some good work that has emerged, like Greg Marinovich’s book. But the human face of Marikana has barely been exposed through the media. So that is what we wanted to do – we wanted to show that these men who had died were fathers and husbands and were guys who sang in church choirs, liked tea, or supported a particular football team.

It was important to humanise them, to move them away from just being a number or one of 34 who died, or faceless black bodies with no family or history. That was important, and it was also important to track what happened after Marikana. Marikana is quite a seminal moment in our post-apartheid democracy. The state killed 34 men, its own citizens.

At the same time, there are other aspects to the events, before and including August 16, more structural issues that point to a lack of transformation in the mining sector, the confluence of interests that include capital, political people, organisations, etc.

I suppose the biggest challenge [of the project] is getting to places. Twenty-seven of the men who were killed on August 16 were from the Eastern Cape, four of them were from Lesotho, one’s from Swaziland and the others are from around here, from Sasolburg, etc. The aim of the project is to really do what is considered slow journalism, which requires returning quite often to the homes, the communities, that these men came from.

It was important to do that just as a journalistic method. I think sometimes in a 24-hour news cycle, we lose small detail which actually allows for the nuance, to really understand things. Whether it’s the migrant labour system and how it feeds into the economy or fallism, the detail is important. There’s not a lot of long form, considered, slow journalism that happens these days.

I think that a lot of the families [of the Marikana miners], they weren’t receiving proper counselling and support. The problem of having a loved one killed and, in many instances, re-seeing these deaths replayed on television or as evidence in the Farlam commission, is extremely traumatic. Whatever we encountered, as receptacles for people’s stories, for people’s trauma, was never in the same league as what the families were going through and are still going through. I think that’s a thing to always remember.

For example, the 15-year-old son of one of the men who was killed on August 13, Semi Jokanisi, he committed suicide earlier this year. So I think Marikana is going to be with us as a country for a very long time. I think we should really interrogate the trauma of all our democracy that it reflects. But also, this is going to be with the families for a very long time, for generations. Their trauma is immense.

I think government got bogged down in its own narrative in trying to defend itself and the police, which led them to spinning a narrative around criminals and which criminalised the families of the men that the government killed as well.

Something needed to be done as a government, even an apology has not been forthcoming from the government. I think it’s twisted in its own sort of narrative, it’s sort of indicative of the Zuma administration, in some instances,how it defends itself and the mentality it has even at the expense of human decency.

The exhibition runs until October 31.