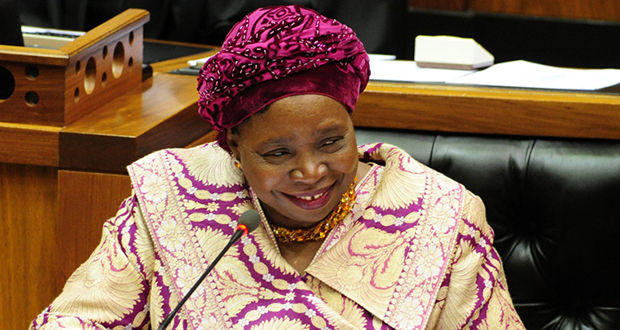 Sheâ€™s the first woman to lead the African Union Commission and one of the most experienced public servants in the country. But as anticipation of her return from the African Union mounts, and rumours of leadership struggles within the ANC emerge, she is seen as a possible contender for the position of the next ANC president. And while she certainly isnâ€™t without scandal herself, she is a woman with an easily Google-ableÂ record. Yet her marriage to President Jacob Zuma is being used increasingly to identify her, as though marriage is the only thing women have to recommend themselves.

Remember this gem from The Economist in January?

Jacob Zuma’s ex-wife may succeed him as president of South Africa: can you caption this photo from our latest issue? pic.twitter.com/TbWAX7VILe

And then last week an AFP story that was published far and wide, also referred to her as â€œJacob Zumaâ€™s ex-wifeâ€.

So letâ€™s go over some of the ways Dr Nkosazana Dlamini Zuma is more than just Zumaâ€™s ex-wife. Yes, it should be obvious, but for the record. 1. Dr Dlamini-Zuma was an anti-apartheid activist

During her universityÂ studies in the 1970s, she became an active underground member of the African National Congress and deputy president of the South African Students Organisation (SASO), a body of students who resisted apartheid through political action and assisted many black students in their pursuit of education. She was forced into exile by the apartheid government in 1976 because of her activism.

2. She has certificates and stuff

By which we mean she is a qualified. Medical. Doctor.

According to her biography on the AU website, she completed her high school studies at Amanzimtoti Training College in 1967. â€œAfter a four-year gap, she started her studies in Zoology and Botany at the University of Zululand in 1971. She obtained her BSc degree and started her medical studies at the University of Natal, where her involvement with the struggle began.â€

After Dlamini-Zuma went into exile, she completed her medical studies at the University of Bristol in 1978. She then worked as a medical officer at the Mbabane Government Hospital in Swaziland and a paediatrician at Whittington Hospital thereafter. In 1985 she returned to the United Kingdom to complete a diploma in tropical child health at Liverpool University.

@TheEconomist She’s an MBChB and BSc holder, Chair of the AU with a sound political background yet you insist on reducing her to an ex?

The doctor also has four honorary doctorates from four different national and international universities, including honorary professor of the Belarusian State University. She has won more awards for her work in health and women empowerment.

3. For the white people among us, she was in Mandelaâ€™s cabinet!

She was the minister of health from 1994 to 1999 before being moved to minister of foreign affairs from 1999 to 2009, under president’s Thabo Mbeki and Kgalema Motlanthe. In 2009, Dlamini-Zuma was appointed as minister of home affairs, which she served until her resignation in October 2012, when she was nominated for the position of AU Commission chairperson.

4. She oversaw legislation to stop public smoking, and got Home Affairs its first clean audit

Dlamini-Zuma played a vital role in desegregating the health system in South Africa and gave underprivileged people access to free basic healthcare. She had the difficult job of formulating the healthcare structures for nine brand new provinces (remember, homelands were governed “independently” but also ended up riding roughshod on civil society).Â In 2012, Fatima Nahara, an NEC member of the Womenâ€™s League said Dlamini-Zuma is renowned for her no-nonsense attitude. â€œWith Nkosazana, you know no means no.”

5. Sheâ€™s certainly not a saint

In 1995, the Department of Health awarded a R14.27 million contract to playwright Mbongeni Ngema to produce an AIDS education play â€“ Sarafina II â€“ for young people. The contract was criticised the Public Protector for poor financial controls and poor commissioning procedures after journalists probed into the deal. Dlamini-Zuma agreed to shelve the play following the Public Protector’s report. Dlamini-Zuma was also criticised for backing up anti-AIDS drug, Virodene, which was cheaper than other drugs but rejected by the scientific community as ineffective.

Essentially, referring to someone with the incredibly lengthy (if intensely disputed) political track record as just Zuma’s wife is sexist as hell. It’s like calling Amal Alamuddin, the multi-award winning, internationally-renowned lawyer who has represented, among others, Julian Assange and Al Jazeera journalist Mohamed FahmyÂ and worked at courts as high as The Hague itself, just George Clooney’s wife.

Wait, someone actually did that? Oh.

Zuma isn’t just an actor (though DA members might actually like him then); he has an extensive political track record of his own, butÂ can weÂ all agree that you don’t need to bring him up to talk about Dr Nkosazana Dlamini-Zuma.