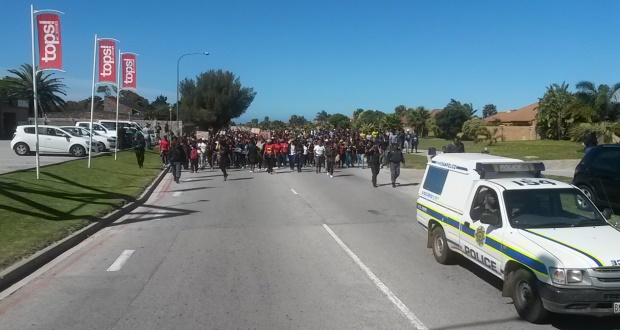 Nine Nelson Mandela Metropolitan University (NMMU) students appeared in the Port Elizabeth magistrates court in PE on Thursday morning on charges of public violence and disrupting traffic. They were arrested on Wednesday afternoon as a group of protesters marched to The Boardwalk Hotel and Casino.

The #NMMU9â€™s case has been postponed to 12 October for further investigation.

The university has been shut down on Wednesday and Thursday, to â€œallow management to actively engage with studentsâ€.

Meanwhile, students are engaging in a mass meeting to plan the way forward.

Scenes from the mass meeting to be held at the South Campus auditorium to map a way forward #NMMUshutdown @thedailyvox pic.twitter.com/5ucIFmfo2S

Wednesday’s arrests came after students gathered at the universityâ€™s South Campus Kraal earlier in the day to hand over a memorandum of demands to the university management, as well as map the way forward in terms of the protest action.

The acting vice chancellor, Dr Sibongile Muthwa addressed the crowd but had to leave after students started chanting songs and refused to listen to her. Students asked Muthwa whether university management planned to join the protests, to which she responded, â€œI cannot join and I cannot force my staff to as well, however they may join if they want to as they are democratically allowed toâ€.

After management left the meeting, the students then decided to march towards The Boardwalk â€œin order to disrupt white monopoly capitalâ€. They were escorted by the police, but it was agreed that students would only march up to The Boardwalk. The march was peaceful until students neared The Boardwalk and decided to forcefully enter the complex. There was a stand-off between police, dressed in riot gear, and students, with shoving coming from both sides. Stun grenades were discharged at students, and they fought back with rocks and water bottles. No injuries were reported.
Another group of students broke off and again attempted to enter The Boardwalk. Another confrontation with police ensued and stun grenades were discharged. Nine students were arrested and taken to the Humewood police station.

The remaining students had a meeting and decided to head to the police station to demand the release of their comrades.

The students were released at around midnight and appeared in court on Thursday morning.