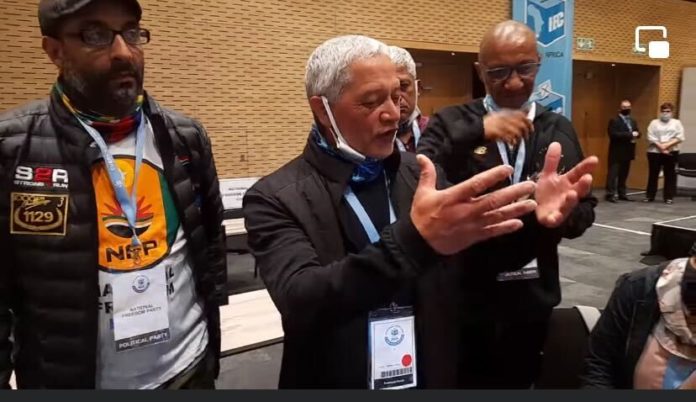 The Wednesday press briefing by the Independent Electoral Commission (IEC) in the Western Cape was interrupted. Anwar Adams, the Democratic Independent Party (DIP) leader, interrupted Michael Hendrickse,  IEC Electoral officer, during the briefing. Adams was demanding a recounting of the votes.

During the briefing, Adams stopped Hendrickse as he was speaking. Adams accused the IEC of sweeping things under the carpet. According to Adams, the code of conduct of the elections had been violated by various political parties. During the briefing, the IEC announced that the Western Cape centre would close at 18:00. Adams disputed this: “How can you still tell me that you’ll close down here at 6pm but there’s still votes that need to come through. What are you still planning or who are you the puppet of.”

During a briefing at the national results operational centre, IEC deputy CEO Dr Nomsa Masuku dismissed suggestions of a recount. The IEC’s Granville Abrahams said if it was a matter of criminal charges, a docket would have been opened with the police. Abrahams said the matter would then lie with the police, not the IEC.

“If there is an objection, the commission would be considering. Once we’ve considered it, we will decide on it,” said Abrahams. Speaking on the calls for a recount, Abrahams said if they allowed everybody to demand a recount, “we would sit here for a very long time”. He said the decision of a recount lies with the commission and a court of law.

Once the ballots have been sealed, the IEC cannot open them. There has to be a court order to open the ballot boxes. The ballot boxes can only be opened six months after the election has taken place.

Adams was supported by Youseff Kanouni from the National Freedom Party (NFP) and Alvina Abrahams, the NFP’s mayoral candidate in the Drakenstein Municipality. Adams accused the Western Cape IEC of being an “electoral puppet” – in support of certain political parties.

Speaking to The Daily Vox after the interruption, Adams said he has various allegations and concerns that he raised with the IEC. However, according to Adams, the IEC have not taken any of his allegations seriously. Adams was the only DIP member on the 2016-2021 City of Cape Town council. He said the IEC never picked up his calls and attended to him when he called on them.

At around 16:00 on Wednesday, the DIP has only 32 ward votes in the city, according to the IEC results dashboard. This meant Adams wouldn’t be returning to council when it started its new term in November.