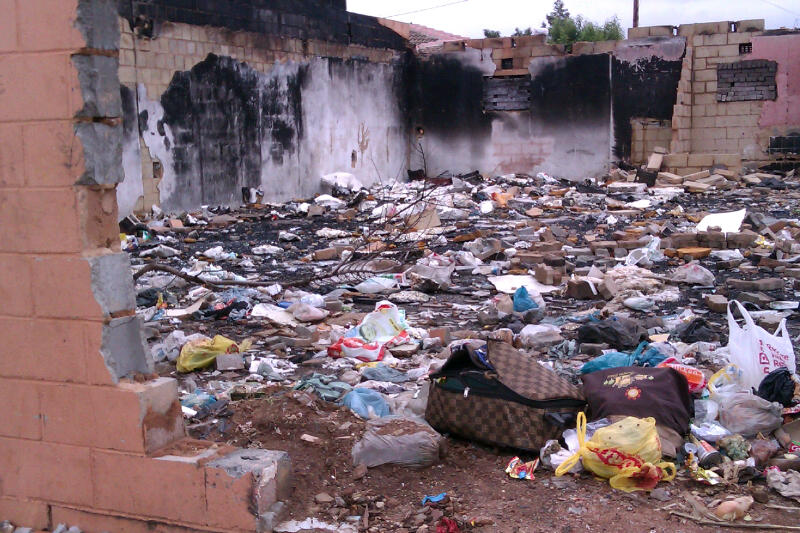 Bekkersdalâ€™s violent protests have been all over the media. On Thursdaythe 13th of March, again, residents took to the streets, barricading roads and burning tyres. They say this protest against ANCâ€™s door-to-door campaign was sparked by the presence of Premier Nomvula Mukonyane who previously undermined them.

They have lost hope in the ANC and any other political party. “There is too much corruption in South Africa. Trust me when I say no party will ever solve all our problems. They all have one thing in common; they lie, lie and lie. They come here and campaign. We just listen because we know we are not going to vote anyway.

I honestly think the DA is better. They know how to communicate with people. I did not register because protestors closed down the stations and I wonâ€™t vote because they said no one will vote so Iâ€™m afraid. What if I go and then put my life at risk? All I want is change.”

“The living conditions here are very bad and there are no changes at all. For us, who leave in the shacks, itâ€™s worse. We suffer the most. Now, because of elections, political parties come here and lie to us because they want votes. They do not even understand the difficulties we have here but they promise to solve everything. I canâ€™t even say which party I want to vote for. My party is IFP but I know ANC will win no matter what. People here do not want to vote this time.Vote for what? Tell me! Look at how dirty it is here. We want houses and electricity just like the people up there in big houses.”

“My problem is work. I look and look but I cannot find a job and I need money. I do not know anything about parties. I donâ€™t want to get involved. I am from Mozambique and when they protest I do not even go near them, because when I ask what is happening they ask me why I want to know and what I am going to do, so I am scared. What if they beat me? I want to vote but here in South Africa, itâ€™s hard to vote when you are a foreigner.” “The biggest problem here is unemployment and service delivery, I can say only 30% of people are working. Elections are a problem, I feel that people must vote, but how are you going to convince people to vote when they are so frustrated? The premier said she doesnâ€™t want our “dirty votes”, then the people said, fine, we will keep our dirty votes, and the next thing they show up and campaign. Of course people will be angry. The majority wonâ€™t vote here. Maybe only 10% registered. Registration was disrupted so some were denied the opportunity to register.

I myself I am a loyal ANC member, even I am having second thoughts about voting. We could vote for a different party and things might get worse.”

“No political party can be trusted, and I cannot say I want a particular party to win in these elections because we will still live like this. There is no way that I will vote if the municipality is not closed down. I want the municipality of Westonaria to shut down. We need one closer to us so that they can deal with our problems. The whole community agreed not to vote and I think it is their right because thatâ€™s how they feel. It is painful, really painful. It has been 20 years now and we still live like this. The municipality must close down.” “What I want the most is a house and I don’t care about anything else. We have suffered enough. I do not know anything about politics and I do not care. I just want the things I want. I have been voting for the ANC because I come from the Eastern Cape and Tata is from my home. I am not sure who to vote for. I do not even care which party it is a long as I get a house. I do not want my kids to be involved in protests. These things are dangerous and people die. This government must just give us these things before our children die.”

“Any political party can come and campaign here and they do. EFF was also here earlier. What made us protest on Thursday is because they came with Nomvula, who said that she does not care about our â€œdirty votesâ€. We donâ€™t want her here. Different parties try and convince us to vote for them. You know them, they only promise but do not do anything. The government here is failing us and when people protest against it, the ANC comrades fight them. Last year they shot the leader of the protest dead because they were protecting the government. To tell you the truth, there is going to be chaos in these elections because it is agreed that we all not going to vote here. Maybe they will block the entrance or protest, I donâ€™t know, but Iâ€™m sure there will be no voting. “