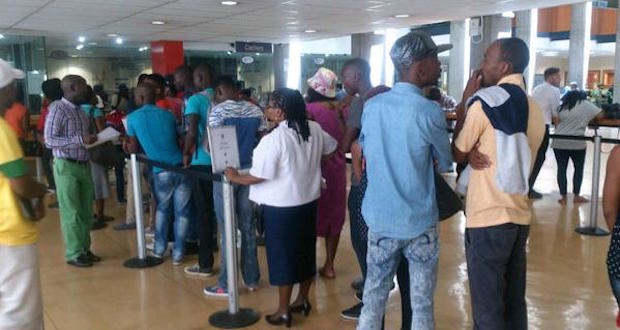 A provocative tweet sent by Sasco Wits, which claimed that Wits was refusing to allow students on NSFAS bursaries to study next year, caused panic late on Tuesday.

@WitsUniversity is refusing all #NSFAS students to Register for 2015 Year of study.

The hashtag #WitsNSFAS trended nationally on Twitter on Tuesday night, and a protest was organised via the social-media site. The protest is set to take place at 12pm on Wednesday on Wits Main Campus.

Kalla also stated that about 800 students are still waiting for NSFAS to settle their fees from last year. In addition, students who applied for NSFAS this year are uncertain about being able to register, because they had not been informed about outstanding documentation timeously. As a result of this miscommunication between NSFAS and Wits, Kalla said, these students are now in a state of financial uncertainty.

Kalla said students who have outstanding NSFAS-sponsored fees have been asked to sign an acknowledgement of debt with the university, and must now pay half of the registration fee upfront by the registration date.

The â€œrefusalâ€ that SASCOâ€™s tweet speaks of then refers to the universityâ€™s failure to acknowledge that needy students dependent on financial schemes such as NSFAS may not even have the R4,670 required for registration.

â€œWits is being exclusive in this way, and from a moral standpoint, this has to then be questioned,â€ said Kalla.

Sasco member Senzekahle Mbokazi said the situation was out of studentsâ€™ control.

“We are sitting in a meeting with [Wits management] tomorrow [Wednesday] to ask them, what do they expect students to do about getting this kind of money just like that?” he said.

Times Live on Wednesday quoted Wits SRC president Mcebo Dlamini as saying that students were angry and the university was â€œprovoking [them] to burn down the universityâ€.

But Dlamini told The Daily Vox that his words were twisted and taken out of context. â€œWhat I had said was that this is a national issue, and that students will be burning universities (as they did at TUT) on these issues because they are not being properly addressed by the Ministry of Education,â€ he said.

Asked to comment, Wits vice-chancellor Adam Habib said that this was an NSFAS issue and that there was very little the university could do to help students now facing a funding crisis.

â€œWe don’t have the money. We are trying to accommodate students with the money that we do have,â€ he said.

NSFAS spokesperson Kagisho Mamabolo told The Daily Vox that universities had received confirmation of the 2015 funding allocations on 19 December last year together with guidelines for the administration of funding.

â€œWe have further requested each university toÂ  indicate, in writing, if they would need NSFAS to make the 30% upfront payment available to assist students who are the poorest of the poor and thus unable to afford registration,â€ he said.

So there you have it â€“ students on NSFAS have no clarity yet on whether theyâ€™re eligible for funding for this year, Wits is waiting on NSFAS to confirm funding for students, and NFAS is waiting for Wits to tell it who will need money for the upfront payment.

Are you feeling reassured yet?

Sascoâ€™s inflammatory statements, meanwhile, simply underline that NSFAS must be sorted out once and for all.

Editorâ€™s note: This article has been updated to include comment from the NSFAS.

Please note, the original articleÂ  included the following lines, which have since been removed, as part of the concluding paragraph. â€œNSFASâ€™ misadministration and miscommunications has had a devastating impact the very students the organisation is meant to aid. Students funded by the NSFAS, blameless in this situation, now bear the consequences of the schemeâ€™s maladministration and inefficiency.â€

Are you a student funded by NSFAS? If you would like to share your story, please drop us a line.