Home Human Dignity ‘Nobody wants you around’: the story of a black woman with white...
WhatsApp
Facebook
Twitter
Email
Print 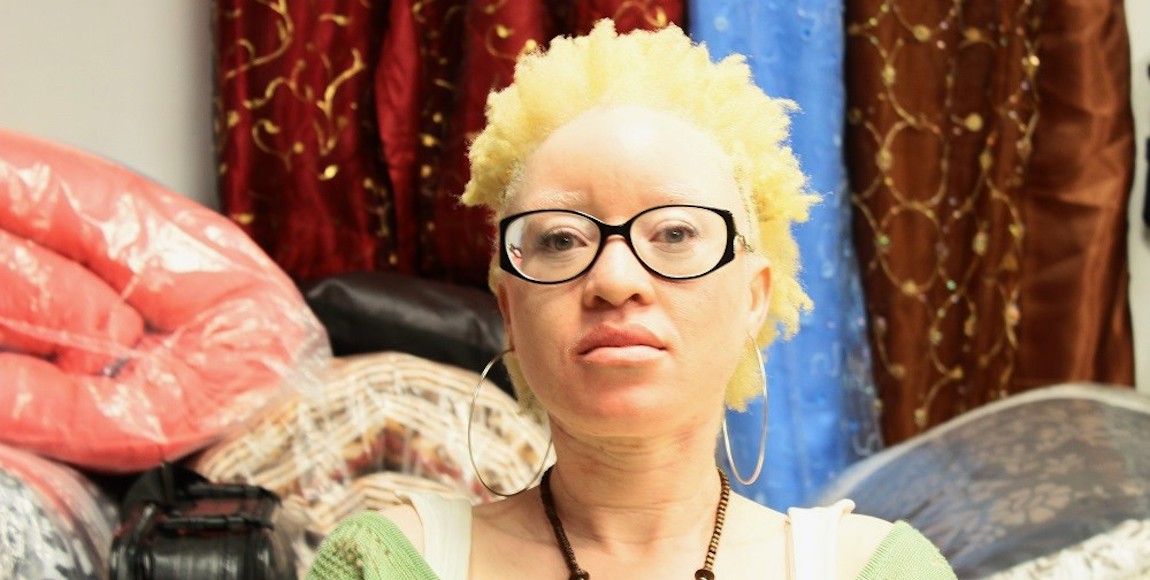 Regina Mary Ndlovu (28) is an actress living with albinism. She told The Daily Vox about the relentless discrimination she experienced in both Zambia and South Africa, and how sheâ€™s finally living her dream.

When I was born, the nurse asked my mom, â€˜Is your husband white?â€™ She said no and the nurse handed me over. In Zambia albinism is seen as something really bad. My dad said â€˜No, thatâ€™s not my child. I donâ€™t want herâ€™. Then he left. They had to come to South Africa to talk to my grandmother, to talk to her son, and he came back.

I grew up with my brother and cousins. They didnâ€™t want to play with me at all. But I didnâ€™t think anything was wrong. We didnâ€™t discuss albinism in the house, or why I didnâ€™t have my brotherâ€™s skin. Nobody ever brought it up at home. The community brought it up.

In Zambia, when you see someone with albinism, you spit into your shirt so you wonâ€™t have a child with it. When I walked with my brother to the shop, kids would spit, adults would say things. Theyâ€™d curse or call me names like moabi (monkey). My brother would tell me to cross the road and walk on the other side. Heâ€™d say, ‘Nobody wants you around.’

At primary school, I couldnâ€™t see the board. When I told my teacher, she said I was disturbing the class and told me that I should be somewhere where I belong. I told my mom that I wasnâ€™t coping at school. She said, â€œYour eyes are fine.â€ So I went to school like that.

At school, Iâ€™d tell the teacher I was sick and and go to the sick room or the toilets and stay there. Nobody asked where I was. I thought it was okay because I didnâ€™t have to deal with them. But it was the worst mistake of my life. I didnâ€™t learn to read and write. I was pushed from one class to another. They told my mom I was slow.

In French class, when I couldnâ€™t read off the board, the teacher would tell me to come to his desk. He acted concerned and when youâ€™re a child that has been neglected, the only thing you want is someone who gives a damn. He would scold me, saying, ‘Why canâ€™t you read?’ and his hand would be up my dress. It was so painful but I didnâ€™t know what to do. When the class ended he would say, ‘Mademoiselle, you are very beautiful. Donâ€™t tell anyone about this.’

I liked to hear that. Everybody told me that I was ugly. I got it in my head that if I allowed a person to touch me like this, theyâ€™d love me. I thought this is what Iâ€™d have to do so people would like me. At least when they did that, they said nice things to me.

When my dad passed on we moved to South Africa. But the same kind of discrimination happened here. There are different myths about albinism in different countries but the same pain is being inflicted. People asked if my mother used muti on me, asked about us dying and disappearing â€“ that came from my own aunt. She told me that she wanted to see my body buried but that meant I would have to die before her.

When I started school, I was the joke of the class. They said people like me didnâ€™t belong there. I was struggling to read and I didnâ€™t have glasses. The teachers would beat me and say I was lazy and wasting their time. During group work, the other kids would talk about me like I wasnâ€™t there. Theyâ€™d say â€œYou know youâ€™re bad luck, right?â€ or â€œI heard if I sleep with people like you Iâ€™ll get good luck.â€

I didnâ€™t know anybody else with albinism. It was just me. I didnâ€™t know if what they were saying was true. I would cry all the time. I started self-harming and tried to commit suicide 11 times. My family said I just want attention.

I finished school in 2008. I failed matric. I couldnâ€™t even read and write. When I saw a page and a pen I would tremble. Where was I going to get a job? I wanted to be an actress. I knew I could do that but there was no way to make it happen. There were auditions at the Market Laboratory. They loved me. But then they asked if I could do a reading, and I couldnâ€™t. I was illiterate. So they just said thank you and they didnâ€™t take me.

Then, in 2012, my house was burgled and I was raped. I used to think that Iâ€™d brought bad things onto myself. But thatâ€™s when I realised this could have happened to anyone; it wasnâ€™t anything Iâ€™d done. I said â€œMary, if you want to be this person that you want to be, youâ€™re going to have to do it on your own.â€

I taught myself how to read by putting the subtitles on when I watched movies. Four years later this man, Arthur Molepo, came looking for me. Heâ€™d gone to the Market Lab and asked for a specific type of actress. They sent him to me. Arthur said he didnâ€™t care if I didnâ€™t have training, he would train me. I was in tears. He said he wrote a play 30 years ago and wanted to bring it to the surface. He said that if I said no he would be so disappointed, that he needed me. Ndlovu went on to feature in Molepoâ€™s stage play â€œMama, I Want the Black That You Areâ€, a play that unpacked the discrimination and marginalisation that people with albinism face. She later wrote and performed her own play, â€œMary Mary, My Voiceâ€ and started the arts programme Dynamite Dynamic Explosion.

As told to Nolwandle Zondi, edited for brevity and clarity