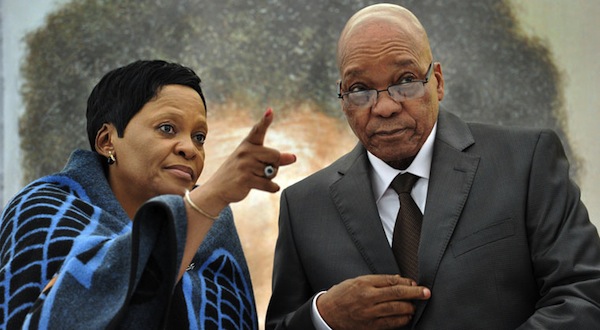 On Monday, I was bombarded with the headlines of leading South African media agencies  including City Press, Eye Witness News and SowetanLive “all claiming that Water and Sanitation Minister Nomvula Mokonyane had pledged to defend President Jacob Zuma with her bums. Yes, her bums.

Mokonyane has been known to make some cringeworthy statements but this time it wasn’t her words but rather the obtuseness of our media that had me cringing.

In the articles, written by a journalist for the South African Press Association, it’s explicitly stated that what Mokonyane had said was “Re tlo thiba ka dibono” which, when directly translated, means “We will defend Zuma with our buttocks”.

Now, the absurdity of this statement is quite clear and Mokonyane, who has had her fair share of dramatic statements in the past year, has been ridiculed for it.

Mokonyane is an easy target.

In October 2013 while still serving her term as the Premier of Gauteng, Mokonyane visited Bekersdal, the site of serious service delivery protests, and reportedly told the discontent residents:”People can threaten us and say they won’t vote but the ANC doesn’t need their dirty votes.” Her comments outraged residents who made it known that Mokonyane and the ANC were no longer welcome in their community.

This week the media capitalised on Mokonyane’s past transgression in Bekersdal and sensationalised what in retrospect is not even newsworthy. Doing so meant ignoring  whether deliberately or through sheer ignorance the possibility that she may have been using a figure of speech, which of course, she was.

As a Setswana speaking person, I immediately knew that Mokonyane’s words were not meant to be taken literally.

I called my mother to verify what I already knew, and she confirmed to me that “Re tlo thiba ka dibono” is a Sesotho idiom. This particular one implies that one will fight to the very end.

Idioms are common in every language, and African languages are no different. In Setswana we call them “diane” and they are used all the time.

When I was a child and wanted to eat all the chocolate my mother had bought me in one day, she would say “Phiri o rile ga bo se gangwe”meaning “The wolf said that the sunrise does not come once”,  a figure of speech, which in English would be rendered as “Tomorrow is another day”.

I can only assume that if a journalist had overheard this interaction, she would have reported my mother to the authorities for being a crazy woman who claims to talk to wolves.

The reporting in Monday’s papers undermined not only the minister, but also the Sotho language and highlighted the wilful ignorance of journalists and editors who could easily have cleared up the confusion over the figure of speech with a simple phone call to a Sotho speaker.

But I suppose “fighting with our bums” sells more papers than “fighting to the end”.