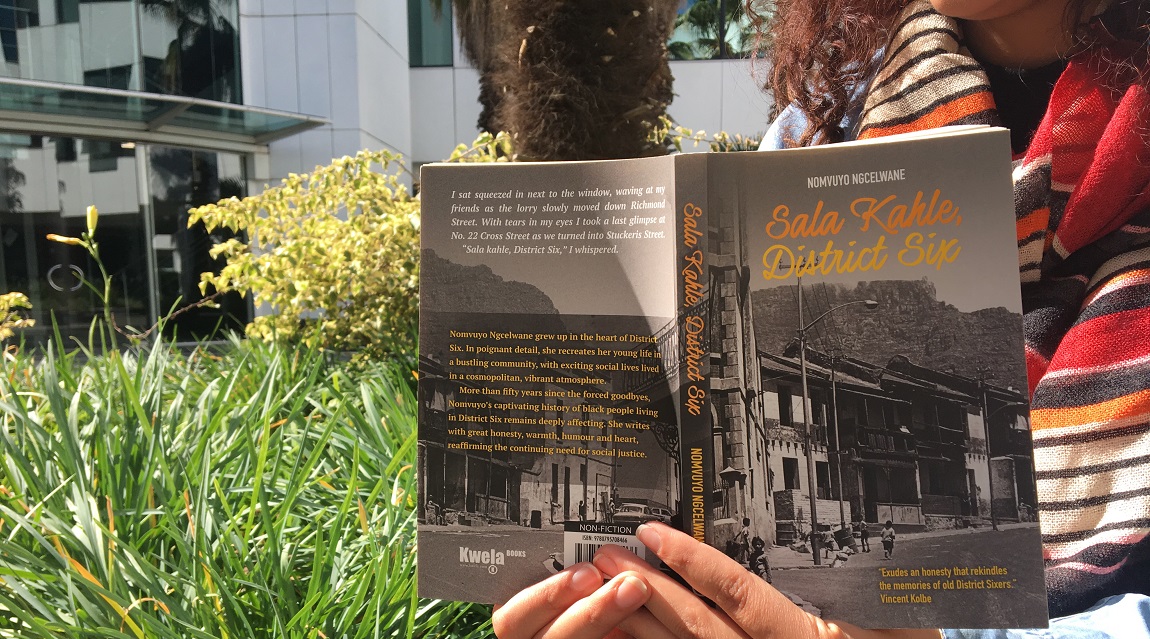 Nomvuyo Ngcelwane’s book Sala Kahle District Six was first published in 1998. For the 20th anniversary of the book, publishing house Kwela Books have produced a second edition, a very interesting read which tells the story of black people’s experiences living in District Six in Cape Town. It exposes a new narrative around the place which saw the forced removals of many people during apartheid.

Ngcelwane’s autobiography is a description of her family life in the heart of District Six. This was an area in Cape Town which was home to many people from different race and religious groups including Asians, Africans, Christians, Muslims, and Jews.

In 1966, District Six was declared a whites-only area and with the Group Areas Act, many people were forced out of their homes.

Ngcelwane tells the story of the place before the forced removals. The book begins with a recounting of why she decided to write the story. It was 1996 and the government announced that the African people who had been removed from District Six would be eligible for compensation. She is surprised about this because she says:

“It is seldom if ever acknowledged that Africans, too, used to live in District Six. People only know of the experiences of their former coloured neighbours.”

It is for this reason that she told her story and why she wanted to narrate the life of black people who had lived in District Six.

Even though we know where Ngcelwane’s story is headed, and that she will be forced to leave her home, the story does not always veer into that territory. It is the story of a girl growing up. Ngcelwane talks about the normal experiences that all children undergo of being excited about the first day of school, about spending time with friends on the weekend, and of spending the day at the beach. However, all of these stories are tempered by the shadow of apartheid.

Ngcelwane has to travel to Langa to attend the school there once she reaches Standard Two because that was what all the African children had to. Even though her coloured friends get to attend school in District Six, Ngcelwane and her siblings had to travel on the train all the way to Langa to attend the township school. After awhile, Ngcelwane and her coloured friends grow apart as well because of the distances in their schools and interests.

Most of the book follows her day-to-day life, going to school and then spending time with her friends. However, at times, the narrative is interrupted by extraordinary events like how at Boxing Day, her parents refuse to go to the sea, even though they allow her and her siblings to go. And despite persistently asking her parents why they do not accompany her and her siblings to the ocean, the matter is never discussed or revealed.

Despite living in the city, Ngcelwane says some of the traditions of the country remained with the people in the community. This included elders who ensured that the young men living in District Six did not shirk their duties to their families back home. Ngcelwane’s father was one of these elders and their responsibilities included stepping in and intervening if someone was doing wrong. In one case, Ngcelwane says the elders intervened and sent one of the young men home because he had been wasting money and being a disgrace to his clan.

It was as the 1960s started that the major trouble begins for Ngcelwane and her family. She talks about how her parent’s friends begin to talk about the forced removals of black people from various areas in Cape Town to Nyanga West. She also mentions her experience of the 1960 Langa March and watching people from her house, marching on the streets, chanting “Izwe Lethu iAfrika”.

It was October 4 1963 when Ngcelwane and her family were ultimately forced from their home in District Six and made to move to Nyanga.

“My mother and I scrambled into the lorry. Layton was going by bus. I sat squeezed in next to the window, waving at my friends as the lorry slowly moved down Richmond Street. With tears in my eyes I took a last glimpse at No. 22 Cross Street as we turned into Stuckeris Street. “Sala Kahle, District Six,” I whispered.”

And this ends, Ngcelwane’s story in District Six. She says that with the 1996 announcement by the government, there was a report that said it wanted to challenge the perception that District Six was only inhabited by coloured people. She says she hopes that through her book more people learn the truth about District Six.

While there is no single person living in South Africa (even those apartheid apologists and deniers), who can say they do not know what it was like for thousands of people of colour, mostly black people, who were forced from their homes and made to live in despicable conditions, Ngcelwane’s book makes it all that much more stark. It is a read for all, but maybe especially those who claim that apartheid wasn’t a crime against humanity and those denying the devastating effects it had and still continues to have on so many. Any person who visits Cape Town will immediately be able to see the devastating effects of spatial apartheid which started during those forced removals and continues until today, and which Ngcelwane brilliantly highlights in her book.