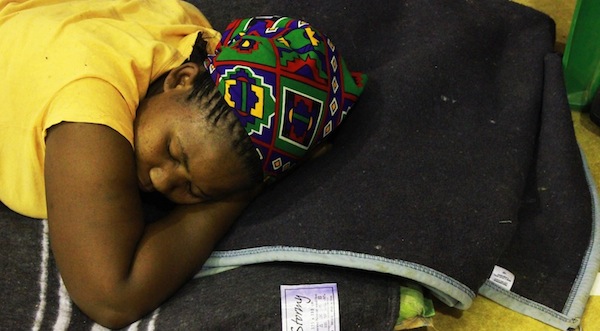 36-year-old Veronica Lujabe lies on a mattress inside the Nomzamo Community Hall. Her 18-month-old twins play nearby, but their mother is tired. After 30 days living inside a community hall, Lujabe is missing the home she once shared with her children. She told her story to RAâ€™EESA PATHER. I was born in KwaZulu-Natal and came to look for work in Cape Town in 1998. I got a job as a domestic worker in Somerset West and thatâ€™s how I ended up in the Nomzamo settlement, which is next to Lwandle in Strand, four months ago.

Iâ€™m a single mother. I have four children. All my children were born here in Cape Town.Â  Their father doesnâ€™t live around here. Sometimes he helps out financially but if he doesnâ€™t want to I canâ€™t force him.

The day the eviction happened was terrible. I was trying to get my clothes and my children’s clothes but the police were throwing teargas, and I lost everything.

When they demolished my shack, they pushed over the wardrobe with all my clothes in it. My son is 15 and hasnâ€™t been to school since that day because he doesnâ€™t have a uniform. He tried to get his books out but the police wouldnâ€™t allow him to go back inside.

We slept outdoors the day they destroyed our shacks. The councilor said they needed time to arrange for us to use the community hall. We got permission to use the hall the next day.

I miss my shack, even now. Itâ€™s not nice to stay here, in the community hall. We all sleep here together. If you are living in a home, people will know itâ€™s your house and they will behave nicely. Over here, people donâ€™t care because itâ€™s not a house. Some people drink too much and behave badly and then we canâ€™t sleep. You might only get to sleep at 4 oâ€™clock in the morning, especially on the weekends. I was supposed to go to work today but when I woke up it was already 10 oâ€™ clock. If I was staying at home, I would be able to wake up early but with the way things are here, itâ€™s difficult because Iâ€™m always so tired. I wasnâ€™t like this before. Sometimes I feel as though Iâ€™m going to cry. My children are just kids, and even with things the way they are, they keep playing but I canâ€™t live like this.

I see South Africa but I still see apartheid. How could they allow people to do this to us? God created this land for everybody, so why have we been told that we canâ€™t live here?

They should have asked us to leave nicely… they were supposed to give us notice. Iâ€™d been living here for four months and I thought of it as my home. My son doesnâ€™t have books or a school uniform. Where was the government? If they cared about people, they would have prevented this. But they donâ€™t care.

Â I want to go back to my house, then Iâ€™ll be happy; not for me but for my children, so theyâ€™ll have a place to stay.

– As told to Raâ€™eesa Pather