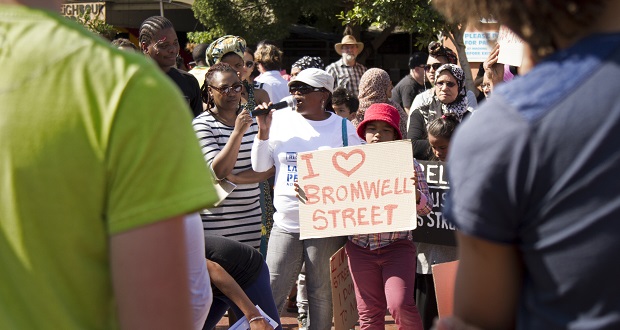 Dozens of Salt River community members and Reclaim the City activists occupied the Old Biscuit Mill recently in protest against the eviction of low income residents on Bromwell Street, situated just around the corner from Cape Townâ€™s luxury-goods market. Filmmaker Kurt Orderson was there to document it all.

Kurt Orderson has seen homes bulldozed, families left out on the streets and residents traumatised in Cape Townâ€™s neighbourhoods of Woodstock and Salt River.

Heâ€™s been working with and documenting the lives of community members who have faced eviction over the past two years to make way for development companies promoting a wave of gentrification that has seen property prices skyrocket and demographics shift in these historic areas. His documentary, Not in My Neighbourhood: gentrification, spacial violence and the need for resistance, is currently in fundraising phase.

Camera slung over one shoulder, dreadlocks knotted and hanging down his back, Orderson takes long strides down Bromwell street, a one-way, 700 meter-long road that runs parallel to the cityâ€™s train tracks.

This contested street is home to the luxury food and goods market, the Old Biscuit Mill, as well as several shiny new blocks of small bachelor pads that start at R1million each.

On the other end of the street, where Orderson has spent the past two months filming, dilapidated Victorian-era structures are home to working class families that pay around R2,500 in rent per month. As property prices soar, the families who have lived in the area for decades and their livelihoods are at risk.

Orderson spoke with urgency about how this particular street has become a microcosm of the kind of spatial exclusion experienced in the city for centuries.

â€œThe workers are black and working class, they’re migrant workers in their own city. They come in at six in the morning and they leave at five. They build the city. They are the people who make up the city, who bring economic power to the city – but they’re still paid slave labour wages,â€ said Orderson.

â€œIt has a lot of connotations to it, around this idea of â€˜funkifyingâ€™ destruction and violence. The terminology almost allows gentrification to take place, with this hipster culture happening alongside it. I’m interested in the people when they are dispossessed. When areas are gentrified, what happens to those memories of community?â€ he asked.

Orderson was working and living in Harlem, New York when he spotted a piece of graffiti one afternoon that read: â€˜gentrifiers get out of my neighbourhoodâ€™. That was seven years ago. When he moved back to Cape Town in 2010, he started seeing similarities between areas like Harlem, Williamsburg and Brooklyn spaces like the Woodstock Exchange and the Old Biscuit Mill in Cape Town. A script for a 15-minute video soon turned into a feature length film that investigates urban processes such as gentrification, urban renewal and architectural apartheid, with social conditions that protect the privileged.

â€œThe Biscuit Mill is the epicenter of escapism, of this nostalgia of privilege and the kind of glorification of privilege and material wealth. This is what Cape Town represented during the glory days of apartheid,â€ Orderson says, gesturing to the market.

â€œI’m interested in memory, of how people remember and retell, and also who is the custodian of the archive.

Graham Beukes is part of one of 28 families that are being evicted from Bromwell Street. A single parent with three children, heâ€™s been living here for the past 36 years.

â€œLaw enforcement just comes and they put your stuff outside and you have to go and look for somewhere else to live,â€ said Beukes. He currently pays R2,000 for rent, and says it could go up to R10,000 if property owners get their way.

â€œOur communities are being destroyedâ€, says Charnell Commando, a Bromwell Street resident of 29 years who is also facing eviction.

â€œI could have walked from here to the shop to buy potatoes or onions or whatever they sell, but now they (developers) are buying these shops, they modifying the shops. You can’t just go and buy a packet of potatoes for R5, because they’re going to have a boutique there that’s selling dresses for R1,000.â€

â€œMost of us have been staying here all our lives. Where must we go? They want to build a parking lot here, they want to put out families on the street, theyâ€™re creating poverty,â€ Commando said, adding that one of the most worrying moments she experienced was when a man arrived on her doorstep one afternoon last year and offered each resident R1,000 to move immediately.

Orderson has witnessed the trauma of forced removals firsthand.

His documentary is deeply personal. It reflects on the eviction of his own parents, who were one of the 60, 000 families kicked out of District Six in the 1960s.

â€œMy father speaks about memories,â€ said Orderson.”His memories are more about Trafalgar park, the swimming pool, the view of the mountain, what the community looked like and felt like – nostalgia mostlyâ€.

Today, Orderson sees history repeating itself in Woodstock and Salt River and feels the legacy set out by Dutch colonial settlements, the 1913 Native Land Act and the apartheid spatial planning of the Group Areas Act continues, 22 years into democracy.

â€œNo one really talks about the experience post-evictions – where these people end up you know? Where do they go to?â€ says Orderson.

Blikkiesdorp: One of the most violent spaces ever

Commando says her worst fear is that not finding accommodation would mean moving to Blikkiesdorp, a place synonymous with drugs, gangsterism and unemployment.

Many families were told that they would live there for 8 months.

Eight years later, there is little prospect for them of moving closer to the city.

Blikkiesdorp consists of 2, 000 one-room structures made up of tin and zinc sheets, without any insulation or built-in bathroom facilities. Some are home to up to 10 people.

Situated 30km outside of Cape Town, Blikkiesdorp was established as a temporary relocation area by the City of Cape Town that never relocated. The families who live in Blikkiesdorp say they have been moved away from communities, schools, medical services and work opportunities. The unemployment rate is as high as 73% and, for those who have maintained jobs, transport to the city is expensive – the commute can take up to two hours using public transport.

Orderson hopes to use his hometown to start a global discussion on spacial violence. The production of his film has taken him from the United States to Sao Paolo, where similar issues exist.

â€œI’m not interested in this idea of victimisation,â€ said Orderson.

â€œIt’s a critical time. So I think it’s important for us to make this film, within this time.â€ Kurt Orderson is an award-winning independent filmmaker from Cape Town, South Africa. He has directed and produced over a dozen films that have screened to domestic and international audiences and he has worked in over ten countries. Kurt has produced works in collaboration with the Oprah Winfrey Foundation, SABC, UNICEF, South African Human Rights Commission and Urban Think Tank; Switzerland. He is the founder and director of Azania Rizing Productions, which aims to inspire young people through creative storytelling about Africa and the African Diaspora.

Check out the Not in my Neighbourhood Indiegogo campaign
Follow @OtabengaTafari 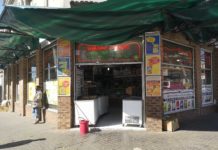 The Sweet Taste Of Pakistan In Fordsburg

#JusticeForCapeFlats: Here’s Why People Are Turning Their Avis Orange