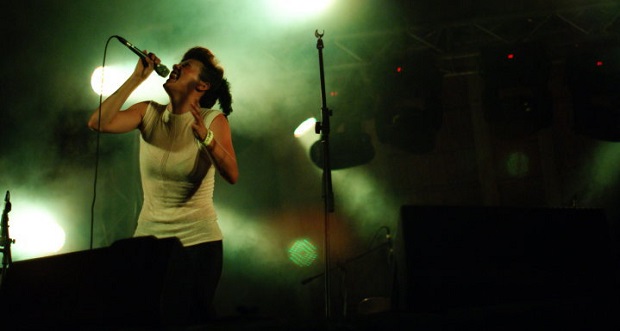 This is the second and final part of a series by musician, Cami Scoundrel. Read Part 1 here.Â

Conversations about the White Boysâ€™ Club erupt in white males pointing fingers and shaming us into silence using terms like â€œFeminaziâ€. There is no understanding of why music and careers in music have been geared towards white men, with responses like, â€œmore girls should just play instrumentsâ€. Without understanding that girls are still brought up to believe that playing music is a â€˜masculineâ€™ occupation. Or having any knowledge of the hardships that women face as female musicians in a male dominated industry.

More than once, I have gotten off stage and been told that, â€œyou know how to handle a hard piece of wood.â€ More than once I have been hired just because I look sexy on stage, not because of my years of practice or skill level. Women on stages are things to be objectified. While men love to argue that they are sexualised too, itâ€™s not the same argument; itâ€™s not the norm for them.

These white male structures are prominent in so many sectors. An article about the University of Cape Town law school and law in South Africa written by Remy Ngamije highlights the White Boysâ€™ Club nature of law in South Africa. He reminds readers how, â€œfor the majority of black students we were the first in our family to attend university but also to study lawâ€. In the meantime, black law students are competing with their white counterparts, whose familiar roots run deep in the dispensation of South African law; to the point where name dropping of someoneâ€™s advocate father and uncle became commonplace. Once law school is complete, the majority of graduates that go on to fill the ranks of candidate attorneys and junior counsel are white males. Whereas black students have had to drop out due fees, financial exclusion, and loss of drive after being cowed into silence because of their ignorance of the law while white students could ignorantly and unnecessarily attack African customary law.

In the South African information technology sector, Mandy de Waal tried to write an article on the lists of experts as an overview of the new media industry and found that the most prominent business owners, companies and players in the industry were predominantly white. To try and counter-balance this she started asking the experts questions about empowerment, and the answers she got were laced with misogyny and bigotry: â€œSorry Mandy, this is a white boyâ€™s game. Thatâ€™s the way it is.â€ Or: â€œYoung white males have the best aptitude for this industry. Others donâ€™t. There are some women on the periphery, but like blacks they donâ€™t have the aptitude to deal with hard core tech stuff.â€

Some of the best insight about the White Boysâ€™ Club came from an article on gaming written by Glen Kisela on where the gamers of colour are. Kisela also asked: â€œWhy are there so few women gamers?â€ Another group where these questions are met with answers like, â€œso what?â€ and, â€œwho cares?â€ from the dominant boys. In Kiselaâ€™s opinion, the lack of diversity in the gaming scene shows that there are problems holding others from entering the scene. This point holds true for every White Boysâ€™ Club – not just in the music industry.

Back in the music industry, the experiences that I have had over the years seem to be a common thread among many black and female narratives. Many women in the industry who are not white have story upon story to tell of how they have been discriminated against in the predominantly white male space of the South African music industry. From journalists being called â€œlittle girlâ€ in the photography pit, to drummers being told off-stage that they can â€œbang really wellâ€- the misogyny spreads far and wide. Most often, black women are assumed to be â€œcoconut groupiesâ€ – a term that holds much power in music festival settings – assuming that these women firstly aspire to whiteness as a result of their music taste, and only want to get with the band. This reduces them to sexual objects and never someone who can critically be part of the music scene without a racial or gendered agenda.

With South Africa being one of the most economically unequal countries in the world, the White Boysâ€™ Club often fails to note or care about the massive disparity of wealth between the rich and poor, with people of colour bearing the brunt of that inequality. Itâ€™s why itâ€™s so easy for white males to say they should â€œjust pick up a guitar and playâ€, or â€œitâ€™s their own fault, they should do more for themselvesâ€. They forget or refuse to acknowledge that they are also creating problems that intimidate black males from entering the scene: when they laugh at blog posts about gender issues, judge people of colour on their English when they themselves have failed to learn any other languages (because English is the norm right?), and donâ€™t call out racism or sexism as it happens in front of them. They also tend to forget or deny our countryâ€™s history of oppression.

What can white males do to start alleviating gender and racial inequality in these industries? Small steps. Donâ€™t make jokes or put down every article on gender or racial inequality. Donâ€™t make racist or misogynist comments. Call out people that are being racist or sexist. And most importantly, stop taking commentary on the White Boysâ€™ Club and white privilege so personally. You are not under attack. You are being asked to be a part of the solution. Cami Scoundrel is a Cape Town-based musician, filmy, and circus conspirator. She completed her honours degree in Philosophy at the University of the Witwatersrand and is in the process of completing in her masters degree in Anthropology.