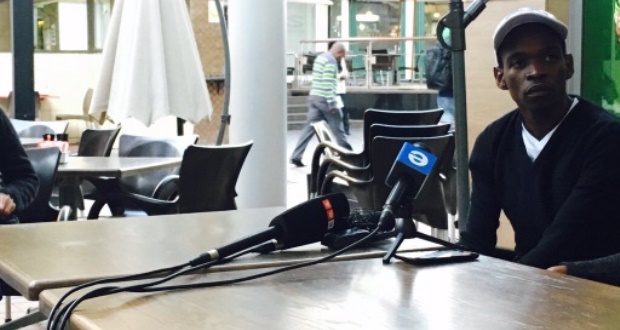 NTOKOZO QWABE, who rose to global fame through leading the Oxford campus Rhodes Must Fall campaign does not hold back in firing bullets at white supremacy and its systematic structures. The UK-based black South African Oxford student activist explained to Mbali Phala why disrupting whiteness is necessary.

The act was not directed at Ashleigh, the waitress. Quite frankly, her feelings are irrelevant to us. If you think people demanding a just society in South Africa is a borderline offence then you are clearly out of touch. Her working class status isnâ€™t as material as it is made out to be. Even if sheâ€™s working class, she is linked to whiteness. By virtue of her skin colour, she is privileged. The aftermath has revealed to us that thereâ€™s no such thing as “this is an oppressed white person”. There will be lit things that will happen. And it will be scary to whiteness.

The story as it has been told by the media, is very different to the story that actually happened. The media standards are quite low, people are living on our Facebook pages to get news – no efforts to contact you and get context of what actually happened. A lot of the time with things like these, weâ€™re placed in a way that has already been decided about us. The act was about disrupting whiteness in a particular space, it was not aimed at the waitress. I didnâ€™t even write the note on that slip, a fellow activist I was with did.

This was not just a moment of spite or “dickness” as some call it. I’m not interested in the politics of dickness. We explained to the waitress and manager that this wasn’t to be taken personally – it was a disruption of normal order of space. The manager came to our table and made a scene; this is what we call white tears. Theyâ€™re not literal tears – no one cried. She ran with the idea of a helpless violated person because of the thousands that came her way. People have dug out her and her momâ€™s social media posts and it just shows how problematic they are. These innocent white girl tears re-entrenches patriarchy because white womenâ€™s tears make white men want to jump in and save white women from all these aggressive black people.

Whiteness as an ideology is irrational. Just by virtue of this person being white – whiteness is a currency. When we talk about land, we aren’t just talking about the ground. We’re talking about all of the products of the land. In each and every space we find ourselves in, we can conduct parallel processes. And that includes a restaurant. The money raised proves exactly the point we were asserting about whiteness. It was not about the waitress, but whiteness. Jackie Shandu of the EFF KZN provincial branch perfectly describes the “who” and “we” written in the slip refers to.

When people with marginal identities assert themselves and protest in South Africa, we take it personally. This was a political act and I understand all of these actions to be part of decolonisation. In light of this being an action to disrupt whiteness, I fully stand by it. Those written words on a piece of paper is not radical. If things are not going to get sorted out, things are only going to get more lit. We were not disillusioned that this was a radical protest action, it is as important as the other small forms of activism. It was a successful form of protest because of the debate itâ€™s been able to spark.

Racism is a phenomenon of dispossession. In South Africa, we can’t understand racism without understanding the land question. Racism, just like sexism, isn’t divorced from the structures of historically entrenched power. We need to think very carefully about how South African society is structured and who we care about and who we don’t care about. We did not get here by osmosis; there are global processes that lead us to the situation weâ€™re in now and we must think carefully about how to address the situation going forward.

This is why decolonising the curriculum is an important part of the student movement. Weâ€™re asking ourselves if you exist in a society and you feel assaulted by black people and transgender people asserting themselves, then what are you saying? That people should be happy with being oppressed? I think thereâ€™s a lot of work to do. There have many attempts to demonise the movement and discredit it. Weâ€™re not disillusioned by it; we know who the forces are and we know the directions at which these oppositions come. We will continue doing what weâ€™re doing, for years, because itâ€™s important. Rhodes Must Fall has been a catalyst for consciousness.

I donâ€™t recognise the rainbow nation. I think itâ€™s a myth that exists in white peopleâ€™s head and it also existed in a lot of black people within the ANC’s non-racialist politics. I do see how the ANC negotiators lost – all talks of radical land and wealth redistribution were stifled. The progressive people in 1994 either lost or became irrelevant and got co-opted into the white power structure. Weâ€™re not about to have a society that’s so abnormal.

The intergenerational conversation has become very hard to have because our parents are happy that they can queue with white people in the same line. We young people have been queuing with whites, and weâ€™re not about to be happy because of that. We may seem ungrateful to our parents but weâ€™ve reconciled ourselves with that.

I believe in a non-partisan movement. Our struggle as activists is to continue the movement as non-partisan. Weâ€™re influenced by particular ideologies and have underlying ideologies. In terms of politics, I do vote, but in the grander scheme of things, I donâ€™t think political parties will save black people.

Iâ€™ve been particularly disappointed with some of the responses by black people. But I donâ€™t engage in those politics, black people are free to choose whatever views they want to hold. I worry that a lot of the time as black people, weâ€™re so attached to whiteness itâ€™s incredible. Thereâ€™s an attachment to whiteness in a weird way. Iâ€™m worried about how black people have become desensitised to black suffering and how simultaneously, they jump to the defence of whiteness. I donâ€™t think weâ€™re going to radically confront the white power structure. Black people will kill you first before you confront the real powers that be. This is why Marikana happened. Where were all the black people when Marikana happened? It was the black people that are serving on these boards of these companies that donâ€™t value black lives. It shook the world but how much money was raised as a result of the Marikana massacre? Weâ€™re talking about bodies, loss of income. Weâ€™re not talking about words being written on a piece of paper.

My degrees aren’t going anywhere. My scholarship isn’t going anywhere. The petition to have me removed from the University of Oxford is just another white myth. Iâ€™m going back on May 10 to complete the last term of my degree then Iâ€™ll have three degrees and return to UCT as a teaching and research assistant.