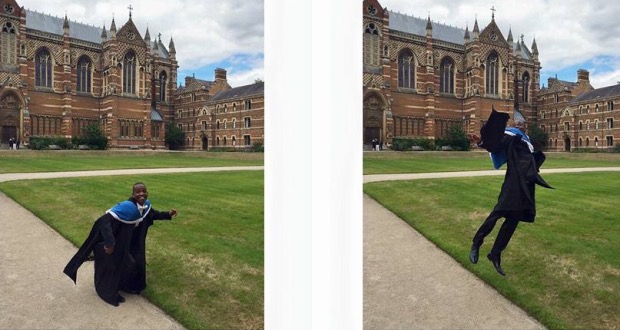 Student activist Ntokozo Qwabe, known for the “#Tipgate” scandal, is now completing a Master of Laws degree at the University of Cape Town. This is his fourth qualification, after also achieving a Bachelor of Laws from UKZN, as well as not one, but two Masters degrees from the University of Oxford. On Wednesday evening, he published a note explaining whyÂ if black excellence is to rise, fees first need to fall.

YES, it is true that I am doing my fourth degree – two of which were Masters degrees recently done at the University of Oxford in 2015 and 2016.

YES, it is also true that, in 2014, I was the top student in all my courses, all passed with distinction, while doing the Master of Laws degree I am now completing at the University of Cape Town.

YES, it is true that I have had the privilege to speak at the Oxford Union, the Cambridge Union, the United Kingdom National Union of Students, the Queen Mary Pan-Afrikanist Society, and many other highly held platforms while studying in the UK.

YES, it is true that I have been selected as the UKZN Distinguished Student (2014), as a Barclays Afrika’s 100 Brightest Young Mind (2015), as a KZN Young Achiever of the Year (2015), as Counsel for UKZN at the All Afrika Moot Court (2013), as one of the most influential students at Oxford and the broader United Kingdom while abroad, among other things, and have been fortunate to be featured on BBC, in DRUM Magazine, in Destiny Man and many other platforms I could never have dreamt of appearing in.

YES, it is also true that I have served the community extensively – having been Founding Editor-in-Chief of a law journal, Judge for the Oxford Cuppers Intercollegiate Moot Court, Researcher for Oxford ProBono Publico, Academic and Transformation Officer of the Black Management Forum, Research and Education Coordinator of Students for Law and Social Justice, Mentor for the Black Lawyers Association, and co-founded, sat in boards of, and participated in many Non-Profit Organizations and community initiatives.

BUT ALSO (and this is VERY important!).

YES, I am the same person who is a university drop out because of fees.

YES, in 2007 (yes, THAT long ago – I am a whole 25 years old now!), armed with “excellent black” status – having finished high school at just 16, I could only register at UKZN to further my lawyer dreams by getting myself into debt with a loan from NSFAS. A loan which, back then, only covered 75% of my tuition fees and no transport, residence, food, books or any other such expenses.

YES, I had to walk for two hours everyday to and from UKZN in order to get to lectures, and would come home too tired to even open a book!

YES, inability to cover the rest of my fees, and to get any other assistance in respect of the other expenses forced me to drop out of UKZN by the second term in 2007. Attempts to get a job failed dismally – with all employers telling me they were not willing to hire an under-aged 16 year old.

YES, the only company willing to hire under-aged me was Shoprite Checkers – first as a trolley boy (yes, those people that push customer trolleys from outside stores), then as a till packer (yes, the people who put your items in your bags at the till), and finally as a cashier (when I had turned 17).

YES, for the next three years until June 2010, I made billions of money for the CEO of Shorprite, Whitey Basson (and his cronies), who was recently revealed to be earning millions in salaries and bonuses – all while I was earning a meagre R1, 800 per month, and having to save ALL of it so that I could return to university. I know first hand the exploitation of the black poor at the hands of white capitalism in South Afrika, and that is why I unapologetically champion a student-worker struggle that also seeks to dismantle the exploitative outsourcing of, and payment of poverty wages to, workers on campus.

YES, when I was finally back at university by 2010 (now able to cover the NSFAS shortfall through my own savings), I managed to achieve results excellent enough for a bursary – with the hope that it would cover my extra expenses so I did not have to stay at Shoprrite for part time work on weekends and could focus solely on my studies. However, what was supposed to be a moment of relief was actually a cause of further stress. A NSFAS rule which prohibited me from holding a bursary while funded by NSFAS led to the immediate withdrawal of my NSFAS funding – with my bursary now having to pay for tuition, and me being stuck in the same position of no funding for books, food and all such other expenses. A supposedly neutral rule operating to structurally deal with a black body. Many such rules make up what we call our universities. This is why we call them anti-black and anti-poor.

YES, I could only complete my degree by continuing to do piece jobs and tutoring – which often prevented me from fully focusing on my studies and utilising my talents for community building initiatives I cared about. I have no idea how I in fact remained being part of many of these.

YES, all of this structural exclusion, from which I nearly did NOT come back (and from which many excluded black students do NOT come back), nearly prevented me from being the “excellent black” which the system likes to celebrate. I was slightly peeved when, after graduating from Oxford last year, an ANC Member of Parliament took time to congratulate me in Parliament. What a bitter-sweet feeling it was being celebrated by an establishment that mass arrests and shoots its students for asking that their right to education be realised!

YES, what shatters me the most is that university seemed to do all it could to spit me out – when it was supposed to be a place of hopes and dreams for me. A place where I could escape the cycle of black poverty I had been born into. As a person born under apartheid in the homeland of KwaZulu in what is now KZN, to black parents who had been denied of their own education and self development by the evil apartheid regime, university was supposed to be an opening to my big colourful world of sweet black dreams. Yet it seemed to be working precisely to shatter them.

YES, I had “worked hard”. Having moved in Grade 9 from rural schools in Northern KZN to stay with my father at a workers’ cabin of, and to study in, a “better school” at which he worked in Durban, I had only been able to learn to speak English in the last four Grades of my schooling life, but was determined because I knew it would give me a shot at our purely English medium universities. The same English I had to quickly master in order to to top classes populated by mother toungue English speakers in order to get here. Oh the burden of blackness!

YES, as a black person, university nearly broke me to pieces – never to recover, and with no hope of repair. You know, many people will not understand why we call for free decolonised education. They will never understand why we call for our universities to be decolonised and to cease inflicting pain on black bodies. This is why when we say Fees Must Fall, they think we enjoy protesting. They think there is something wrong with us. That we strike because we don’t want to do our school work. While this works to construct their narrative about us being hooligans, it only but exposes their moral barbarity.

YES, we protest not because we are not excellent but precisely because we are. We are NOT hooligans. We are actually the real cream of the crop. We are topping our classes while resisting. I was shocked at how surprised people were that one of the black womxn who took off their top to call for a cessation of police violence during the height of the Wits protests was a PhD student. Why the surprise, I asked myself? Is it because fallists are assumed to be academically unable? How do people think we got here?

YES, my hope is a world where there are no more Ntokozos. No more blacks who have to be a hundred times ultra resilient in order to get to where I have been lucky to. Structural exclusion cannot continue any longer! I was so close to not making it. All those prestigious global awards, degrees, distinctions etc. – they were nearly all shut out. All that black excellence nearly successfully suppressed at the hands of an unjust system. How can we allow this to continue? How can the brightest be kept out by an unjust structure that instists on commodifying education? How can we possibly expect more excellent 16-year-olds to have to expose themselves to indignity in order to have a shot? We can no longer keep out black excellence with fees! Fees must fall for black excellence to flourish!