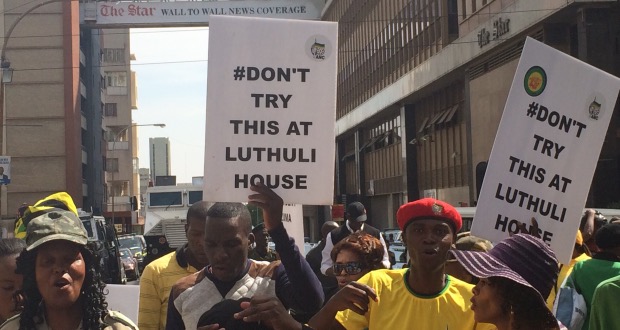 There is very little left of the glorious liberation movement that fills the history books of South African children. Whatever is left of the ANC is fighting each other on the streets of Johannesburg.

An attempt by supporters of Africaâ€™s oldest liberation movement, to deliver a memorandum to the Secretary General, was repelled by another faction of the party, who seek to protect the sanctity of the party, from what they say, are attempts to influence the party from outside.

The #OccupyLuthuliHouse protestersâ€š who have described themselves as “children of the ANC”â€š have demanded that Zuma must step down as president of the ANC and the countryâ€š and the resignation of the current top six National Executive Committee members of the party.

There certainly appeared little to unite the sea of yellow outside Luthuli House.

In the midst of a sea of yellow, on one side, #OccupyLuthuliHouse chanted for Zuma to be recalled. On the other side, the Defend Luthuli House, made up of ANC supporters, from the realms of the Umkhonto WeSizwe Military Veterans Association (MKMVA) , ANC Youth League and Womenâ€™s League, held aloft posters that read â€œHands off President Zuma.â€

Both sides claim to be defending the honour of the ANC.

Zamokuhle Mabena, 20, a student, from Ekurhuleni, said that those uniting under the banner of #OccupyLuthuliHouse should wait until the next national conference to air their grievances.

â€œSo itâ€™s not a matter of saying, you are attacking Luthuli house. Luthuli house has nothing to do with it. If people want to convince people they must go through a book called, through the eye of a needle. Learn how to influence people. Then when they influence people, itâ€™s then they will call for a national conference, thatâ€™s what is important.â€

On other side however, the demand for change within the ANC was resolute.

George Kieblor said he would not vote for any party except the ANC.

And for those marching to Luthuli House to deliver a memorandum to Gwede Mantashe, the sight of MK veterans in camouflage, barricading Luthuli House, was a message in itself.

â€œThere is a connotation of threat with the all these guards. What are all these guards doing here? The guards should protect the state and not the individuals. [The problem] with the ANC, is that it all boils down to squabbles. Its that â€˜If I go down, Iâ€™m taking you down with meâ€™ mentality,â€ Kieblor said.

What is clear for ANC supporters like Kieblor is that the formal processses of the ANC do not work – their voices are not being heard.

But for, Mhlengi Mabuya, 21, a COSAS member, from KwaZulu-Natal, insisted that the occupy movement should go through the proper channels and not just hand in a memorandum.

â€œDonâ€™t give hooligans free airtimeâ€šâ€ Gwede Mantashe is reported to have told a crowd around him.

Who would have thought that the day would come when a boundary of police officers would separate the ANC from itself?