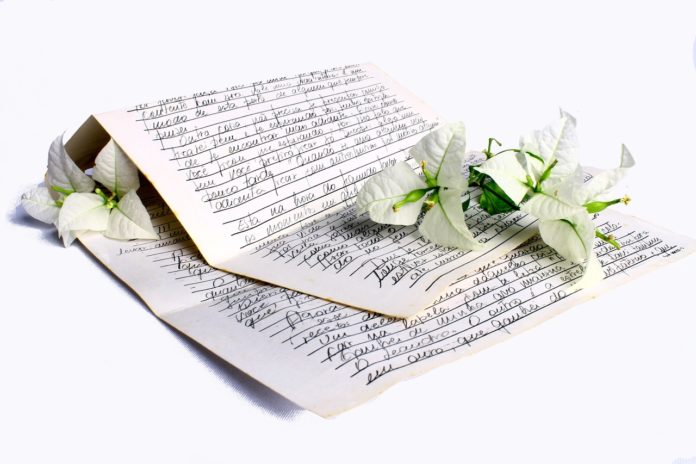 Danai Mupotsa, University of the Witwatersrand

I remember the first time that I wrote a love letter. I was nine years old and it said something along these lines:

Sadly, our affections were not mutually shared. Parham reported me to his father, who worked at the same company as mine. Instead of a reply, I got a sit-down with my dad who explained that I should probably spend my time paying closer attention to my schoolwork.

Despite this disappointment, I continue to carry an attachment to the love letter.

The form of the love letter is a useful way for us to think about romantic love in Africa. Histories of letter writing reveal the ways that dense debates about the individual and collective, or tradition and modernity, have been mediated through both the form and content of the letter.

With friends, it’s easy to laugh about the ridiculous pink and red consumables that flood shopping aisles as soon as the December holidays end. It’s not surprising that we come to experience and understand romantic love quite cynically as a consumer rite, or practice.

Sara Ahmed explores some of these ideas in her 2010 book, The Promise of Happiness. She explains how the so-called “good life” that we are encouraged to aspire to is actually a package of conservative and exclusionary family forms and intimacies. These get packaged as happiness in a neoliberal “trick” that has us convinced that as individuals, through our choices and actions, we can do the work that it takes to be happy.

Romantic love is also the site or scene for various relations of power and violence.

Sexuality generally presents us with personal and private concerns that are also very political. When Stella Nyanzi writes of the [govern]mentality of African sexualities, she highlights that African sexualities inherit the baggage or assumption of the need to be controlled, improved, modernised, civilised or tamed. Established ideas of “good” and “bad” sex inform our ideas about romantic love – and who we might imagine to experience “true love” at all.

The love letter expresses a challenge to some of these assumptions about romantic love in Africa. The letter, like other romantic literary genres, offers an intellectual and affective site that demands a more slippery reading.

Of optimism and uprising

Lynda Gichanda Spencer writes about chick lit in a way that’s instructive. For many observers, the genre is cheap sentiment, selling the same story over and over again. These stories are also charged with being escapist – so women (considered the primary consumers of the genre) are accused of silliness and a lack of focus on more important matters like patriarchy (or their schoolwork). Yet Spencer demonstrates the ways that women writers of chick lit in South Africa and Uganda specifically retain a realist form.

This realist tone is something we might call “sex without optimism,” in the sense that instead of “happily ever after”, the story often ends with disappointment. This offers an “uprising” potential. In a fairy tale, the action comes to a close once the couple mutually recognises each other. This formula has often, although not always, been followed in chick lit. In the African chick lit analysed by Spencer, the threat of infidelity or poverty or both structure the ways that the action is organised. The resolution will instead often involve groups of women supporting each other, or seeking solutions to personal and structural problems.

The term “sex without optimism”, I borrow from Lauren Berlant and Lee Edelman who use the phrase to open their discussion of sex as a negative relation that opens one up to not only rejection but also vulnerability. All relations with an other are shaped by encounters with power and powerlessness and in that sense, imply a form of risk. Berlant and Edelman draw their insights from this assumption, and suggest that sex presents with a range of unbearable contradictions. Even when love succeeds, these contradictions still remain.

I will offer an example.

In December of 2016, Kagure Mugo published a photo essay of the wedding of Anele Mkuzo and Seipati Magape which was widely shared in my circles on Facebook. I have spent a lot of time thinking about weddings for my doctoral research and forthcoming book. Observing so many versions of the same might make a person rather cynical. Yet, I still cry at weddings. When I saw Anele and Seipati’s pictures, again I was overwhelmed by the same feelings.

This is because marriage is a civil right not openly granted to same-sex couples in the world. Weddings of LGBTQIA people in South Africa help us to understand the expression of romantic love as an expression of freedom – and not just as an act of buying into the “good life”.

Further, in a highly unequal society, the ability to marry at all is something that people achieve only by manoeuvring against many odds.

Our accounts of relations of structural violence are often incomplete when we carve out the affective or emotional dimensions. This is why I remain attached to the love letter and other forms of unbearable risk. In part, because they are a resistance to the problematic ways that we continue to encounter images of African sexualities.

Perhaps we can think of the love letter and other gestures of romantic love, as forms, or techniques that mediate the violence of time, dispossession and exclusion; as well as the scene, form and technique of survival, wishing, longing, becoming and failing all at once.

Danai Mupotsa, Lecturer in African Literature, University of the Witwatersrand