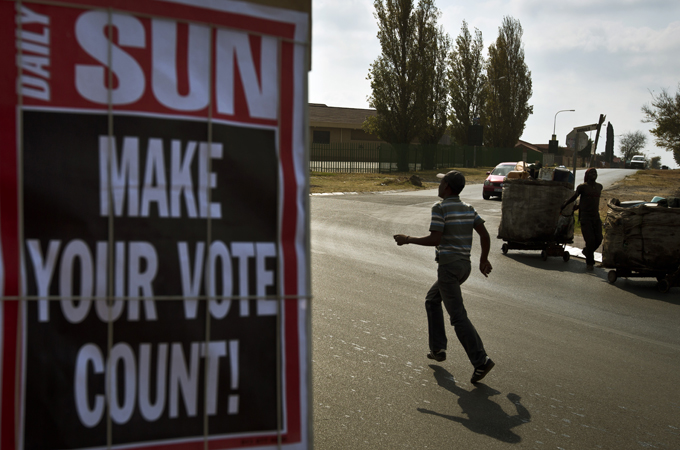 “Okay. Thatâ€™s it. Iâ€™ve had enough. THESE ARE THE ALL CAPS OF ME HAVING HAD ENOUGH,” writes KAREN JEYNES.

Can all the whining white people all over Twitter and Facebook please shut up? Just shut up. Stop talking about how stupid ANC voters are. Stop talking about how youâ€™re convinced the EFF are going to kill you in your sleep. Stop calling people baboons. Stop behaving like Helen Zille is the true saviour of South Africa. For the love of Woolworths, stop pretending like you and only you know what Nelson Mandela would have wanted. Stop saying that anyone who voted for the ANC deserves poverty and AIDS and crime. Take a deep breath, and stop.

Iâ€™m not, for a second, going to stand here and say the ANC are saints. Theyâ€™re not. Zuma is not a man Iâ€™m proud to call my president. But weâ€™ve just had an election. And whether or not a few boxes of ballots went astray, the vast and overwhelming majority of this country voted for the ANC. And your snide, patronising belief that you know better than them, thatâ€™s the slippery slope, right there.

Smugness will eat you alive. But maybe, just maybe, the ANC still have an overwhelming majority because the alternative that voters are being offered just doesnâ€™t cut it. Maybe this is demonstrating the failure of the opposition to really, truly address the issues that voters care about. Human beings are not pure beacons of logic, floating in space. We are emotional beings. That doesnâ€™t make us stupid, it makes us human, not robots. The ANC means so much to so many people. And like it or not, the DA represents so much to so many people.

The ANC brought us democracy. The ANC ushered in our constitution. The ANC have brought a huge amount of change to this country. The ANC have good policies. Why are we consistently creating things to be afraid of? We donâ€™t have enough real problems in this country, we want to have endless paranoid debates about what might happen in your imaginary futures? People are not voting ANC â€œto support corruptionâ€ or â€œbecause they donâ€™t care about this countryâ€. So kindly remove your privileged head from your arse.

And while Iâ€™m losing my shit, no, I didnâ€™t vote for the ANC, I voted for the EFF. And I wish theyâ€™d got more seats. I do think itâ€™s time for change in this country. But not your kind.

Karen Jeynes is a creator of things: plays, films, TV shows, novels, radio dramas, articles and book reviews. Her plays include the multi award-winning â€œEverybody Else (is Fucking Perfect)â€, â€œWake up and smell the coffeeâ€, â€œKiss Kissâ€, â€œIâ€™ll Have What Sheâ€™s Havingâ€, and â€œLaying Blameâ€, as well as â€œVaslavâ€, â€œThe Best or Nothingâ€ and â€œPineapples and Casual Racistsâ€ all premiering in 2014. She serves on the boards of Women Playwrights International and the International Centre for Women Playwrights. She is obsessed with reality television, Good Omens, chaos theory and Nutella. She edits www.thatwordsite.com, a home for wordnerds. You can find her on twitter @karenjeynes.