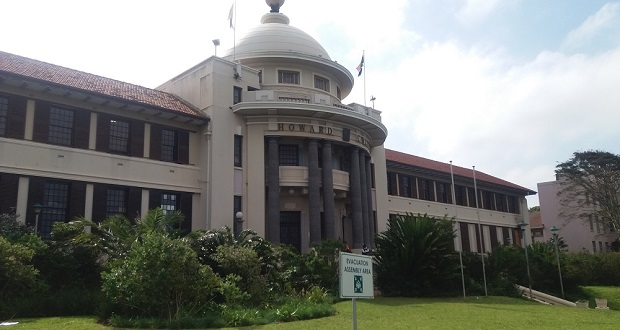 Correction: The Daily Vox has issued an apology to the professors named in this story. You can read it here.Â

The University of KwaZulu Natal (UKZN) is facing scandal as allegations against the Deputy Vice Chancellor and Head of Humanities, Professor Cheryl Potgieter, and a former senior member of staff have emerged.

Potgieter has been embroiled in a series of allegations of misconduct, racism and the latest – “a serious violation of scholarly standards” and fraud. A damning report reveals that Potgieter and former dean of Education, Gregory Kamwendo, plagiarised work in Alternation 21.2 (2014) Humanities, Knowledge Production and Transformation.

Plagiarism checking website TurnItIn, which identifies the percentage of similarity to other articles based on a web algorithm, indicated that Potgieter and Kamwendo had plagiarised the introduction to a collection, which had the work of at least 12 contributors.

Kamwendo has since left the institution, and has been appointed as new dean of the Arts faculty at the University of Zululand.

This has led some academics to question Potgieterâ€™s suitability as a university leader and credibility as a researcher, and is likely to cause serious embarrassment.

The Daily Vox has discovered that the chapter by Potgieter and Kamwendo borrows heavily from other scholars, and uses large sections of work from other academics. This renders the article 79% plagiarised.

All the references to what were cited as â€œstudent papersâ€ refer to the various Alternation articles in the collection. All of the sections highlighted in red are copied directly from the other articles, with only a few â€œfillerâ€ words added to make it appear as if it was written by Potgieter and Kamwendo themselves. The only original part is the first page.

This amounts to a serious violation of the universityâ€™s plagiarism policy and fraud, as both authors accepted funds for the article.

[box type=”shadow” ]UPDATE: In a statement from Alternation’s editor, Professor Johannes Smit, the publication said in introductions and introductory editorials, editors copy the abstracts of articles. “There is some minimal editing involved too. This has been the Alternation policy since the journal was launched as a peer-reviewed, SAPSE journal in 1996,” Smit said in an email, which was forwarded to The Daily Vox. “The reason for this decision is that the authorsâ€™ voices are present in the introductions and introductory editorials and not that of the editor or guest editors,” he says. However, the university is yet to produce the formal editorial policy, which it says supersedes the policy of the university. Furthermore, Smit said in an email to The Daily Vox that the publication puts the articles through the Turnitin system. “If plagiarism is detected, the article is not published,” but introductions or introductory editorials to journals are not the same as published articles and are not put through a blind peer review process or Turnitin.

UKZN declined to comment, saying it “would not be responding to such filth by [writer] Oliver Meth”.[/box]

The matter was reported in 2016 to the Dean of Research, Professor Urmilla Bob, who is said by some to be a friend of Potgieterâ€™s â€“ yet no action has been taken against Potgieter to date.

A UKZN executive member said: “The whole academic project depends on honesty. How else can the public trust the results of research? It is disturbing that someone capable of forgetting that should end up in charge of a faculty.”

Potgieter is one of the many senior executives who had accused Vice Chancellor Dr Albert van Jaarsveld of racism â€“ a charge heâ€™s been recently cleared of by a board of inquiry.

The race row has rocked management and has left many squabbling. The racist jab is deemed by some to be a â€œdivide-and-rule tacticâ€, part of a faction and power struggle in management to discredit Van Jaarsveld as a racist white man after he refused to increase senior executivesâ€™ performance bonuses, largely due to the allegations.

Staff at UKZN say that deputy vice-chancellors are known to do as they please since the days of former vice chancellor Professor Malegapuru Makgoba, and wish to continue doing so under Van Jaarsveldâ€™s watch.

It is alleged that more than 200 complaints have been gathered by unions against her, and in a letter sent to council chairperson, Ayanda Ntsaluba, staff have threatened strike action if Potgieter and other members of senior management are not â€œdealt withâ€.

Complaints against Potgieter range from Human Resource misconduct, plagiarism, unfair discrimination and harassment, among others, that she has perpetrated against staff.

UKZN staff members have been calling for Potgieter to be immediately dismissed pending the outcome of a disciplinary hearing, which was said to have begun in 2016, and later overshadowed by the racism row surrounding Van Jaarsveld. These complaints were lodged with the university unions, who have been in discussion with Van Jaarsveld in resolving the matter.

Quite concerning is the fact that staff grievances and complaints have been blatantly ignored by council.

There doesnâ€™t seem to be a direct line of accountability, as all executives have rallied against the one man tasked to discipline them. Some are asking who is left to address these grievances and allegations.

UKZN Corporate Affairs would not respond to numerous emails on the matter. In a response sent in October 2015, the university said: â€œit is fully committed to resolving this matter in terms of its internal procedures. Due process will be followedâ€.

Over a year later, the matter has still not been addressed while staff at the institution becomes increasingly disgruntled. Staff are now asking for the Council for Higher Education to intervene.

There is a great need to finalise the outcomes of these investigations. If not resolved soon, UKZN could have mounting problems ahead of the 2017 academic year, which include threatened strike action by staff, and issues surrounding Fees Must Fall.

Editors’ note: This story wasÂ updatedÂ with comment from UKZN and a comment by a University of Pretoria academic has been removed.Â