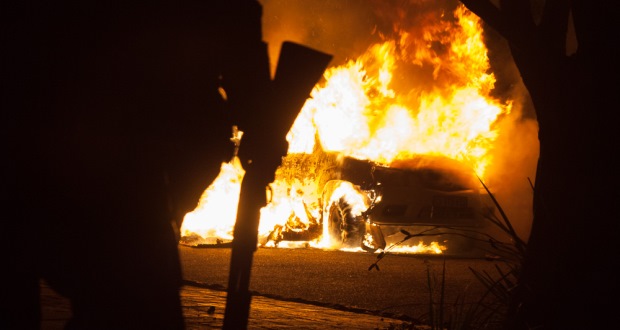 Oliver Meth says these fires donâ€™t need to be extinguished.

Fire is raging across South Africa. Fire over the University of KwaZulu-Natal. Fire in the streets. Fires of protection in defence of capitalist territories. Fire in protection of ANC headquarters Luthuli House. Burning state property, lecture halls and libraries.

The recurring nightmare of teargas, rubber bullets, flash grenades and unlawful arrests at UKZN may be receding, but we must remain aware in this moment, present and fully engaged.

Twenty-two years into democracy, (we) black South Africans continue to experience exclusion â€“ from primary school, to high school, to the university, to the workplace, to the spatial geography of our communities. It extends to everyday interactions in the streets, supermarkets and restaurants.

We were sold a false hope of â€œA Better Life For Allâ€ and given a life of exclusion and disadvantage. Now, that we are “woke” and demand what should rightfully be afforded to us, we are faced with expulsions, teargas, live ammunition and unlawful arrests â€“ as we attempt to break through class barriers, systems that marginalise and keep us on the outside. We have had enough!

The sporadic protests include both students dependent on financial aid and those from the insurgent black middle class, have taken too much â€œkakâ€. Our focus is on a curriculum that we see as narrow and unreformed and on cultures and practices that position us as unwelcome outsiders in public universities in our own country.

Because weâ€™ve been here before.

We are witnesses of the 1976 Student Uprising. We are witnesses and participants in the 2015 #FeesMustFall. We are witnesses and perhaps victims of police brutality, where our black bodies have been falling, countless time to the ground, detached from their humanity and treated like trash. The screams of the grieving piercing our hearts, just as the bullets pierced the flesh of our loved ones â€“ in defence of a better life!

Weâ€™ve been here before.

If we have learned anything, it is this: there exist in this country custodians of an oppressive system – those who fear us and those who hate us – who will gladly kill us. And they are emboldened by a racist system that will tell them theyâ€™re justified and that black lives donâ€™t matter!

There is no justice. Just us!

Then there are mainstream media outlets â€œreportingâ€ on how students are terrorists, thugs, lawless people, capitalising on the police brutality and exclusions to the right for education.

If youâ€™re not actually reporting on the issues that fuel this white supremacist system – lack of food safety, poverty, inadequate health care, war on drugs, slave wages and unemployment – and the criminals in power who perpetuate it, while also pointing to the system as the foundation of the devaluation of black lives, then you are not reporters. You are voyeurs, vultures salivating over the desecration of black flesh.

And the black rage rages on.

This is the language of the oppressed, of the weary, of the strong, of the brave. Of the furious â€“ I salute the comrades.

The burning of university property is a grim acceptance of governance ruled by rights and recognition, sunk under the stateâ€™s description of what matters, what is counted as â€œmorally legitimateâ€ politics, authentic protest, acceptable forms of resistance.

But resistance contests these limits of respectability. In a war of defiance, resistance marks a union of forces that seeks to out-manoeuvre the policing of its legitimate parameters, that moves to negate its suppression. Anger forces itself to the surface. Will this rage be negated?

This student resistance is a form of affirming presence in a space that excludes the lived black realities of many.

Weâ€™ve been here before.

Universities across the country are on fire. Our rage is the fire.

And we donâ€™t need no water, let it burn.

Oliver Meth is a social advocacy journalist and postgraduate student at the University of the Witwatersrand.Â Tweet @oliver_meth.