Home Opinion On changing Rhodesâ€™ name: why we canâ€™t win â€“ and why we...
WhatsApp
Facebook
Twitter
Email
Print 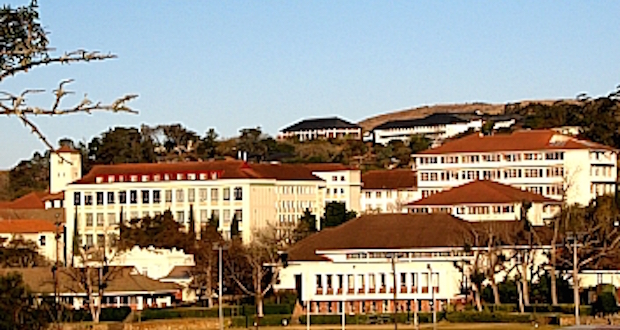 As the protests against the Cecil John Rhodes at UCTÂ spread toÂ Grahamstown,Â an online poll (still open for voting) currently shows that more 80% of those surveyed think Rhodes University should keep its name â€“ despite its colonial legacy. STUART THEMBISILE LEWIS thinks changing the universityâ€™s name isnâ€™t a battle thatâ€™s likely to be won â€“ but argues itâ€™s an important one to keep fighting.Â

During my time at Rhodes, Iâ€™ve engaged with people in multiple positions of leadership within the institution about the name of Cecil John Rhodes. The responses I get are always the same and, I would contest, indicative of the paralysingly slim chance of the name ever getting changed. Let me begin by dealing with these responses.

1. â€œThe universityâ€™s brand is sufficiently removed from the brand of Cecil John Rhodes. There is no need for change.â€
This one is fairly easy to take apart. If Rhodes had indeed sufficiently separated their brand, then we would not be having this conversation. No protests, no emergency student meetings, no nationally-trending hashtags.Â But it hasnâ€™t, so here we are.

2. â€œIt would cost millions to rebrand.â€
This is not inaccurate. A brand as big as Rhodes University requires extensive marketing campaigns to build, let alone replace. Never mind just the costs of replacing every branded item on campus and in town. The costs are simply prohibitive, especially considering Rhodes needs another R1.3-billion just to upgrade its infrastructure over the next five years.

3. â€œWe need alumni donations.â€
Rhodes, like all academic institutions, relies partially on donor funding. Unfortunately for us, this funding often comes from alumni and most of the alumni over the last 111 years attended this institution under the apartheid education system â€“ so donâ€™t expect much hatred for Cecil John Rhodes from them.
Also, they have heavily bought into the Rhodes brand. If they are the kind of alumni who are willing to donate their money to a university they no longer attend, then itâ€™s most likely that going to Rhodes is an integral part of their identity.
If Rhodes canvassed its alumni (and particularly the juicy donation-giving alumni), theyâ€™re likely to find that the overwhelming response, I suspect, will be to keep the name intact. In order to provide services and infrastructure to current students, Rhodes must appease its alumni.

Barring a directive from the vice chancellorâ€™s office, Rhodes is, therefore, unlikely to ever change its name â€“ at least in my estimation. Simply, we cannot win this battle. But we need to keep fighting it.

Cecil John Rhodes is a deplorable human being. He was responsible for the deaths of an estimated 10 million black people and the start of the Anglo-Boer War. He was a rampant sexist and upheld and masterminded a British colonial system that the global economy is still recovering from. He accrued vast wealth off the broken backs of what was essentially black slave labour in all but name.

In myriad ways he is right up there with Joseph Stalin, Adolf Hitler, King Leopold II and friends for worst human being ever.

Our vice chancellor Sizwe Mabizela, and his predecessor Saleem Badat, would never have been allowed in the gates of this institution unless they were going to clean those same gates.

Our chancellor Justice Lex Mpati, only the second black student to achieve his LLB at Rhodes University after having to get a special permit just to attend classes, would not be here. The chairperson of Council, Vuyo Kahla, would not be here. Distinguished Professor Tebello Nyokong, who brings in more funding than any other academic at this institution by a considerable margin, would not be here.

While the man himself may be dead, and good riddance to him, Rhodesâ€™Â legacy remains. We need to rigorously debate what place that legacy has in modern South Africa, and at least now weâ€™re doing that.

So weâ€™re clear: no one, myself included, is suggesting we delete Rhodes from the history books. That would be a travesty. We must remember where we came from so we can shape where we are going, but that doesnâ€™t mean we need to celebrate this, only acknowledge it.

I fully agree with the argument that the money it would cost to change the name and rebrand the institution would be much more useful if it were used to help fund the tuition of disadvantaged students or other worthy causes. However,Â his argument is slightly disingenuous in the sense that this money doesnâ€™t actually exist yet; not changing the name wonâ€™t actually result in increased funding for these avenues

I also fully acknowledge that changing the name or pulling down the statue will have no real tangible effect on transformation in the postcolonial academy. It does not result in more black academics being trained and hired. It does not mean we have finished fighting.

The name and the statue are both symbols and as such are convenient points around which to foster debate and to mobilise change. Blatant expressions of colonial pride such as theseÂ give us a place to focus our justified anger. They are great springboards around which to effect actual change in the real world, if the right kind of leadership is applied to them.

I do not think we will win this battle. But I think we must fight it, if for no other reason than it can be used to force real change and perhaps, one day, win this war.