Home Fees Must Fall On Graduate Unemployment: “We Were Promised That Education Would Free Us Of...
WhatsApp
Facebook
Twitter
Email
Print 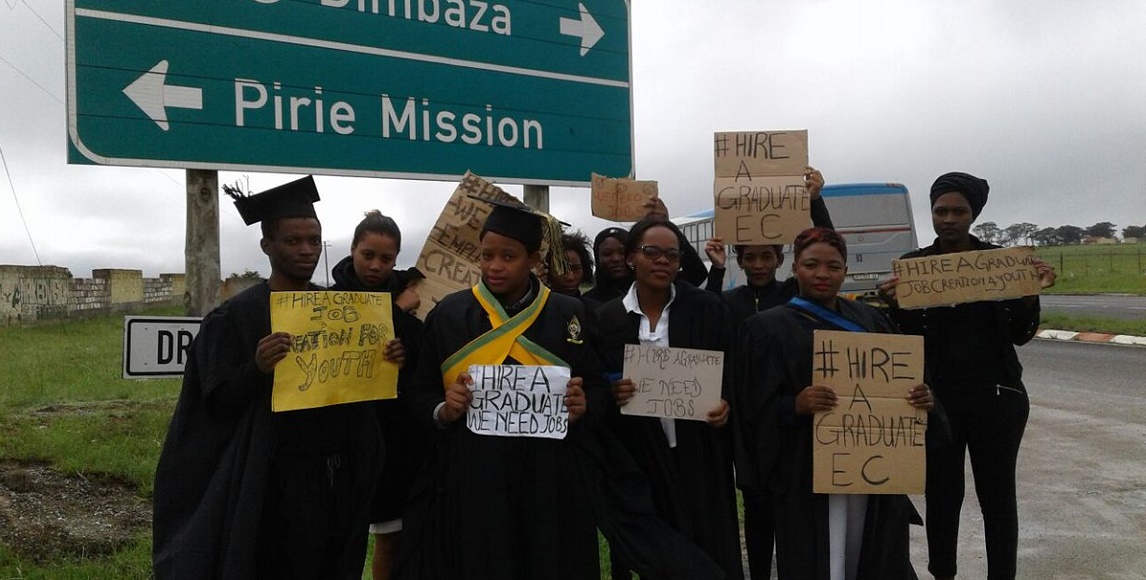 Thousands of recent graduates in South Africa are stuck in the rut of unemployment despite the thousands they pumped into their educations. They are stuck on the periphery: too qualified for lower skilled labour; not enough work experience for a job in the field they are qualified for. Bloemfontein resident Kenny Mahlaba (28) is one such unemployed graduate. On 1 June he tweeted a post titled “The reality of being an unemployed graduate” which garnered over 700 retweets. The Daily Vox spoke with Mahlaba about his situation.

The reality of being an unemployed graduate (5 screenshots) pic.twitter.com/JVaGo4xzPs

I wanted the tweet to reach people in power to make them aware that it’s not only about me, but it’s about thousands of graduates who are sitting at home with their qualifications. We were promised that education would free us from poverty and yet it has brought more burden on us. Now we have to pay for that same education. We have to repay our funders. I want the people in power to be aware of what is happening on the ground because the only time we see them is during elections. I was depressed, I wrote that tweet out of depression. I’m a part-time lecturer, luckily I was able to get that job, but being a part-time lecturer means I get paid according to the number of hours I work so during exams and school holidays I don’t get anything. For June and July I won’t get any income. I’m faced with a lot of bills, I’m faced with supporting my siblings because we lost our mother last year and she was the only breadwinner back then.

I thought about other graduates who are in the same boat as I am. For them it’s worse because they don’t have any income at all.

I’m a language practice graduate from the Central University of Technology. I graduated in 2013 with my diploma. At first, I wanted to study engineering but I could not break into it because of my results so I studied language practice, which was my only option back then. Eventually I fell in love with the course and I wanted to go into photojournalism or communications but it is hard to get a job in those fields.

When you are a graduate from a disadvantaged background, you are expected to support your family. That’s when I looked for a job but I couldn’t get anything. Eventually I found a job at Toyota as a driver. I only worked there for a year and during that year I realised there wasn’t really a future for me because of the qualification I had and being a mere driver as a graduate is not something nice.

The expectation is that the higher your qualification is, the higher the chance of getting a job. That’s why the following year, I decided to go back to university to complete my BTech degree in Language Practice. Still, I could not find work.

There was a time when I was looking for a retail job during the holidays. I know some people who I went to school with who are working retail jobs at Shoprite, Mr Price, and so on. But when the manager went through my CV, he saw that I was overqualified and there was no space for me. Maybe it’s because of jealousy? Someone thinking you will take their job? It’s hard being a graduate who is unemployed.

For higher skilled jobs, we need job experience. How can we get experience if they don’t give us a chance to work and prove ourselves? I tried to apply for internships, but was not successful. In any case, most jobs require five-years experience but internships only give you 12 months.

Last year, I decided to get my postgraduate Certificate in Education hoping that I would get a permanent job but I’m struggling to get a job. I wanted to do my Masters but I was discouraged by my situation because you cannot study on an empty stomach. You cannot study thinking about what your siblings are going to have for supper. I sacrificed a lot. Right now, Nsfas is sending me statements saying that I owe money.

What frustrates me more is the temptation to get involved in scams and dodgy businesses, crime and corruption because the people who are involved in those things are doing so well in their lives. Those who went to university to get an education were told that education will open doors of opportunity but at the moment we are sitting at home, and when we try to open the door we find that that key cannot open that door.

When I look at my Twitter feed and the celebrities who are posting, some of them are not even qualified and yet they earn a lot. You see people who go into ForEx without even a diploma and they earn so much money. Yet with us, we study for five years but we don’t even get stable, permanent jobs.

It’s very sad when we see people posting pictures of themselves on social media with their engineering degrees and yet those people cannot get jobs. If an engineer cannot get a job, does a language practitioner stand a chance?