Home Opinion On respecting the right to make bad decisions: a message to the...
WhatsApp
Facebook
Twitter
Email
Print 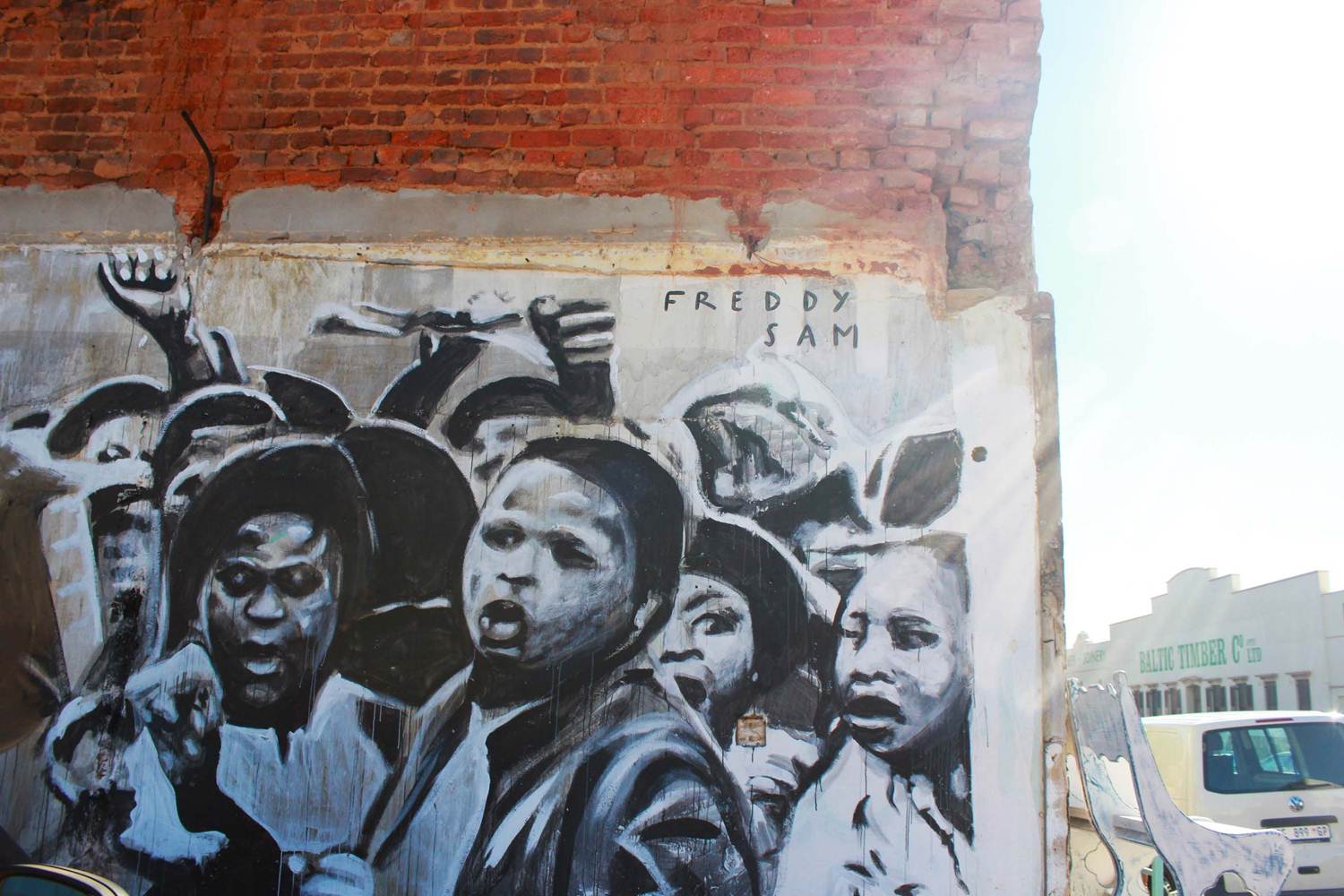 Last week Abahlali baseMjondolo surprised many people when it announced that the shackdwellersâ€™ movement would be endorsing the Democratic Alliance in the general election on 7 May. The movement has come in for vociferous criticism from South African Leftists, which, says JARED SACKS, is misplaced.

â€œThe anger of the poor can go in many directions.â€ â€“S’bu Zikode, President of Abahlali baseMjondolo

Years ago I began to support a unique and influential social movement called Abahlali baseMjondolo (AbM), the South African Shackdwellersâ€™ Movement. At the time, the movement had just refused to work with an influential Leftist NGO called the Centre for Civil Society (CSS) at the University of KwaZulu-Natal. Supported by the militant Western Cape Anti-Eviction Campaign (AEC), AbM had protested the takeover of the Social Movement Indaba by NGOs such as CCS. As grassroots activists, they understood that their voice was being managed and also often silenced by those on the Left coming from more privileged backgrounds, who sought to control the politics of the social movements.

AbM and AECâ€™s principled stance was brave. They lost massive support from Leftists who believed themselves to be the vanguard of working-class struggle and who thought the poor must be directed towards the â€˜right politicsâ€™. Leaders were ridiculed, pseudo-academic pieces were written to undermine the movement, and friends of the movement received threats â€“ some even lost their jobs. Many Marxist-Leninists and Trotskyists scoffed at their No Land! No House! No Vote! Campaign as being short-sighted and liberal. The only legitimate form of organising, they said, was around the eventual creation of a workersâ€™ party.

Eventually, however, AbM was able to show that while they may be poor, they are not stupid, that they can still think for themselves. They charted their own direction as a movement demanding land, housing and dignity in a way they felt was most effective and most principled.

Abahlali has always been an autonomous movement despite the assertions of its detractors. While it has shared ideas and worked closely with other movements, including some non-authoritarian NGOs and a few supportive academics, decisions have always been taken by the movement without regard to outsidersâ€™ wishes and/or agendas.

Despite working with AbM and playing a supportive role with the movement for more than seven years and attending countless meetings and rallies, I have never been part of the decision-making process of the movement. I was not and am not a shackdweller and nor am I a legitimate member of the organisation; thus, decisions were, rightly, always taken without me and or any other outside supporters.

Unlike most Leftist organisations and political parties such as the African National Congress (ANC), the Economic Freedom Fighters (EFF) and the Democratic Alliance (DA), the movement has always been democratic â€“ even while it is still, structurally, hierarchical. All major decisions are always taken back to communities and final resolutions are ultimately taken in general meetings based on the collective wishes of each branch.

This autonomous organising was truly Frantz Fanonâ€™s work in practice. Abahlali has always been and still is a shackdwellersâ€™ organisation, run not by privileged activists or academics but by shackdwellers themselves.

But the continued repression of the movement has taken a toll on its members. After the ANC attacks on Kennedy Road displaced hundreds of members in 2009, the movement was in disarray and took almost a year to regain its feet. The murders and intimidation around the Cato Crest struggle in 2013 was another turning point. Three Cato Crest activists were murdered, including a young woman who was shot in the back by the SAPS Station Commander. Renewed threats against Abahlali leadership put President Sâ€™bu Zikode and General Secretary Bandile Mdlalose back in safe houses and members began focusing on ANC repression, rather than the state, as the primary driver of this violence.

Over the course of the past year, a shift seems to have taken place in the rank and file of the movement in KwaZulu-Natal. Their original critique of the state has shifted to an overarching and focused critique of the ANC.

If the most pressing problem for AbM in KZN, according to its members, is no longer capitalism as a system and the state as the representative of the privileged, then finding an alternative to the ANC becomes key. The movementâ€™s hatred for the ANC is unparalleled because the pain of its members at the hands of the ANC is so deep and pervasive.

Abahlali, therefore, decided on a practical and tactical vote against the ANC as a way to seek protection from the stateâ€™s oppressive apparatus. While most other opposition political parties effectively ignored the movement, the DA in KZN has been opportunistically and aggressively courting AbM for two years.

I say opportunistically because that is what it truly is. In Cape Town, the DA plays the same role as the ANC in oppressing social movements and poor communities. The party pioneered the use of the Anti-Land Invasion Unit in South Africa and is very happy to shoot protesting shackdwellers and build massive transit camps when it suits them. The City of Cape Town has been at the forefront of illegal evictions, such as that of the Marikana Land Occupation. The DA has also been secretly pushing to force the Cityâ€™s homeless in work camps.

If we are to talk about Abahlali baseMjondoloâ€™s core focus around land and housing, it would also be important to note that not only are there many more shacks per capita in Cape Town than in eThekwini, but Cape Town also remains by far the most segregated city in the country.

There is nothing about DA policy that is either progressive economically or supportive of the rights and needs of shackdwellers.

However, the DA leadership in KZN did listen to one Abahlali demand (which the ANC failed to do): talk to us, not about us. Its opportunistic support for AbM won over enough members who saw the largest opposition party as a way out of the continued attacks on the movement. When Abahlali decided to move away from its electoral boycott and towards a strategic vote against its perceived main enemy in ANC, the only political party with a relationship with the movement was the DA.

Abahlali-KZNâ€™s endorsement of the DA must be seen in this light because it is pretty obvious â€“ even to members of the movement â€“ that DA policy does not represent the interested of shackdwellers as a whole.

I was shocked and horrified to hear of AbM-KZNâ€™s decision to vote as a block for the DA. (Note: Abahlali baseMjondolo in the Western Cape has not endorsed the DA despite media reports to the contrary).I believe that this is a hugely mistaken move for the most important post-1994 social movement â€“ both from an acknowledgement that the DA is a right-wing, white supremacist political party, and also from an understanding that electoral politics undermines, destroys, and co-opts rather than helps social movements. Despite my love for Abahlali as a movement and what it represents, it is very difficult for me to continue to support an organisation that votes for the DA â€“ a party founded on white supremacy.

This is not to say, however, that I donâ€™t respect the movementâ€™s decision which, while I strongly disagree with it, is their decision and theirs alone to make.

For Abahlali in Durban, the process of endorsing a political party was slow and deliberate, because of their commitment to bottom-up decision-making. Its branches had to collectively discuss the process and weigh in. When the vote was finally taken at a general meeting of the movement, 190 delegates from their branches made their communitiesâ€™s voices heard. Two members abstained, two endorsed the Workers and Socialist Party, 26 endorsed the National Freedom Party, 16 endorsed the EFF and 146 members endorsed the DA. Abahlaliâ€™s top leadership sat out of the voting process completely to ensure that the decision was really owned by its members.True to the movementâ€™s principles, the process was meticulously democratic and rank-and-file members overwhelmingly voted to back the DA despite the preferences of many of AbMâ€™s core leadership.

Some Leftists have cried foul claiming that the process could not possibly have been democratic or that white supporters of the movement, such as myself, were involved in manipulating Abahlali to support the DA. To other Leftists, the fact that AbM went through a rigorously democratic process and yet ended up voting for their oppressor, proves once and for all that shackdwellers cannot be trusted with a vanguardist political project.

Both arguments have racist and classist undertones and are part of a long campaign to delegitimise independent social movements. The said assumption of such critiques is that poor black shackdwellers either cannot or should not think for themselves and need to be directed by self-proclaimed â€œeducatedâ€ and â€œconsciousâ€ leadership.

As a whole, the South African Left has taken to social media to attack and vilify Abahlali baseMjondolo, condemning them, spreading rumours, and calling the leadership sellouts. Few have attempted to see things from the perspective of its members. Most of the people attacking the movement have never lived a day of their life in a shack settlement â€“ yet their self-righteousness is palpable. Theyâ€™ve refused to comprehend the way repression makes backing the DA seem like a very practical decision â€“ one not about principles or the extent of AbMâ€™s radicalism, but about tactically defending oneâ€™s own life. Under constant threat of death, what would you do? Do any of us really understand how much pain they have endured?

The choice to vote DA also, however, points to the complete failure of the South African Left in supporting AbM throughout years of violent repression. When shit hit the fan and members were being violently evicted, shot at and targeted for assassination, the question is: where have we been? Did we go to Cato Crest and join Abahlali as they marched on the SAPS when Nqobile Nzuza was murdered in cold blood by the station commander? How many of us can truly say we were in living solidarity with the movement? (Note: Iâ€™m not talking about how many times youâ€™ve liked their press statements on Facebook). If anything, Abahlaliâ€™s choice to tactically vote DA in this election is an indictment of the selfish, sectarian and manipulative nature of the South African Left.

I strongly believe that if we canâ€™t, as a matter of principle, commit to the absolute right and ability of all oppressed peoples to take decisions of their own accord, then there is no legitimate communist future worth fighting for. In South Africa, it is the rank-and-file poor black working and unemployed classes who have the ability to recreate this society anew.

And thus, while this affects my involvement in a movement that Iâ€™ve loved and believe in, I still stand in defence of Abahlali baseMjondoloâ€™s right to make bad decisions and I will always continue to support them in times of repression.

I hope that either I am the one that turns out to be wrong and their tactical choice actually does work or, conversely, that Abahlali in the future reconsider their entrance into electoral politics.

We as so-called Leftists should, likewise, reconsider our own praxis that continues to undermine and drive away social movements.

Jared Sacks is a founder of a children’s NGO. Since 2007, he has been living in Cape Town working directly with communities supporting their efforts to build authentic grassroots social change. He has worked closely with a range of poor people’s social movements. He is also the compiler of the anthology No Land! No House! No Vote! Voices from Symphony Way.