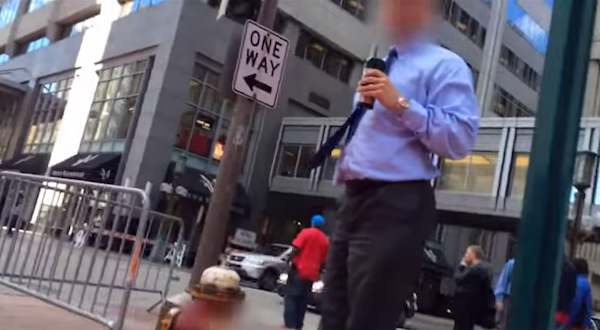 This week brings another reminder that you are notÂ alone in your struggle against street harassment. A 28-year old woman from Minneapolis in the US has been confronting catcallers and filming their reactions.

The woman, known only as Lindsay, says her approach is not for everyone.

“If your personal experience of street harassment tends to involve the fear of physical violence, this project is not intended to suggest you are in any way obligated to engage, escalate, or educate. Everyone deals with harassment differently and you have to do what’s right for you,” she said.Â

She’s launched a project called Cards Against Harassment, which tries to provide a solution to the problem of casual, street harassment – a set of cards that people can hand out to catcallers, drawing attention to why the behaviourÂ isÂ unacceptable.

“The street harassment my friends and I encounter tends to take the form of brief but frustrating interactions: comments made just as men pass by on the street, over so quickly you rarely have a chance to respond. Just as frustrating as the harassment itself is the feeling of powerlessness that comes with not having had a chance to defend yourself or convey how the harassment affects you. Cards Against Harassment are designed to allow those who are harassed, or those who witness harassment, to give street harassers the feedback, however limited, that their behavior is unwelcome.” — Cards Against HarassmentÂ

The websiteÂ provides a set of PDFs that you can download, print out and hand to casual harassers.

“Don’t be that guy. Nobody likes that guy,” reads one. Another says “Only poorly behaved children blurt out everything that pops into their head. You’re not a child, are you?” Lindsay said despite her videos, she’s not advocating a confrontational approach when handing out the cards. “I have been engaging my harassers for the purposes of documenting the prevalence of street harassment in Minneapolis, but the average interaction handing out a card can be rapid and non-verbal,” she said.