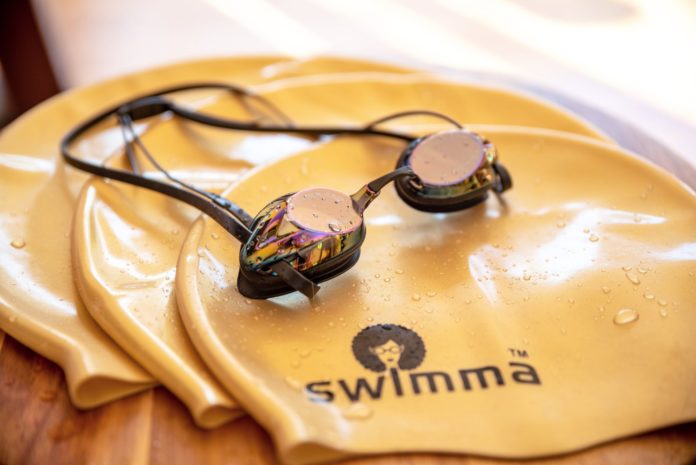 Nomvuyo Treffers is the founder of Swimma, a company that sells swimming caps for women with dreadlocks, braids, long and high volume hairstyles. The Daily Vox spoke to Treffers about her brand and her thoughts on the Soul Cap debacle.

How does the Swimma Cap work?

Swimma Caps are 100% silicone swimming caps designed to fit high-volume hair and hairstyles like afros, braids, dreadlocks, weaves. We are the leaders in this market of inclusive swim caps. The company launched five years ago with just two sizes. We’ve since added more sizes and colours. This is to ensure that we cover as many people as possible, from toddlers to adults with the longest dreadlocks or braids. There is no “one size fits all” as even the same person changing hairstyles may need a different size cap.

What inspired the Swimma Cap?

Swimma Caps was inspired by my young daughters who have afro hair. My daughters love swimming and they would regularly ask me to swim with them. But I had long dreadlocks that I could not fit into any swimming cap available back then. It was a struggle for their afros too. I would make excuses to not join them in the swimming pool. It made me realise I was missing out on quality time with my daughters. We also have a gym membership with access to a swimming pool all year round. At the gym, wearing a swimming cap while using the pool is compulsory. That was also restrictive for me because there was no swimming cap big enough for my hair.

My frustration that had been brewing for years grew. I kept looking for a solution for myself. Then I realised we live in South Africa where many people look like us and likely have the same issues as we were experiencing. We were not the only ones facing the issue. That’s when I decided to launch Swimma Caps.

What do normal swimming caps do to natural hair in your experience?

First of all, those “normal” caps were not normal for everyone. In fact in the African context they were not normal for the vast majority of people. But they were the only ones available and the only option for far too long. If you managed to get one to fit over bigger hair, it would be a very tight squeeze. Some of our customers have shared that they had to wear two caps to cover the front and back of their hair.

The feedback from our customers has been amazing. We have received great support. Customers celebrate Swimma because for them it’s more than a feeling of finally having a cap that fits. Some adults say that for the first time they are using a swimming cap that fits. One mother who bought a Swimma cap for her child shared with us that her daughter kept the cap on and was sitting on the couch watching TV. When the mother asked “why are you not taking your cap off”, the daughter’s answer was “because it’s so comfortable”.

Some parents share that, like it did for me, Swimma has encouraged them to take part in water activities with their kids. Some customers who are adults and never had an opportunity to learn to swim shared with us that Swimma has given them the encouragement to get this lifesaving skill. There are many more stories that are shared either with us through emails, DMs or publicly on social media.

Swimming caps made by the brand Soul Cap, were banned from the upcoming Tokyo Olympics by the International Swimming Federation (FINA) because the caps did not fit “the natural form of the head”, but on July 2, 2021 FINA released a media statement announcing that it is reviewing the situation with regards to “Soul Cap” and similar products, understanding the importance of inclusivity and representation.

What were your thoughts on FINA turning down Soul Cap for the Olympics?

I was shocked and saddened to learn of this rejection, however not surprised. The FINA decision was very likely made by people who don’t understand the science of black hair or the required care of it. Purely saying that the caps don’t follow the shape of the “head” is madness. Have they seen afros or dreadlocks? The caps follow the shape of the hair in that case, which surely is an extension of one’s head. This means black swimmers must alter their hair to fit into small caps by either relaxing it, compressing it with plaits or cutting it short. This should be a swimmer’s choice.

This affects us too because there are young, up and coming competitive swimmers who use Swimma caps and are winning. We want to see them take Swimma to the Olympics. If it’s too late for the current generation swimming at the Olympics, we hope to see the next generation there using swimming caps that are comfortable for their type of hair.

This issue starts at schools level here in South Africa. Schools that offer swimming have told us that they do not need ‘bigger caps’ that accommodate afros, dreadlocks, braids. Ask the learners and you will hear something different.

We have approached a number of schools to carry Swimma in their school shops as an option for those that need them. We brand caps for schools in their school colours and names. Some recognised the need and we are now proudly supplying those schools. But quite a few decision-makers don’t agree or don’t see the point. One school once told me that they don’t need our caps in their school because they don’t “encourage bigger” hair. To say I was shocked is an understatement. You don’t “encourage” what mother nature gave someone?

What has been your greatest achievement?

It has to be Swimma going global, from starting out and receiving support from South Africa to being embraced by other countries who support our brand. Swimma is used in countries we only dreamed of. Our customers are really not just customers – many of them are fans and incredibly supportive of us.