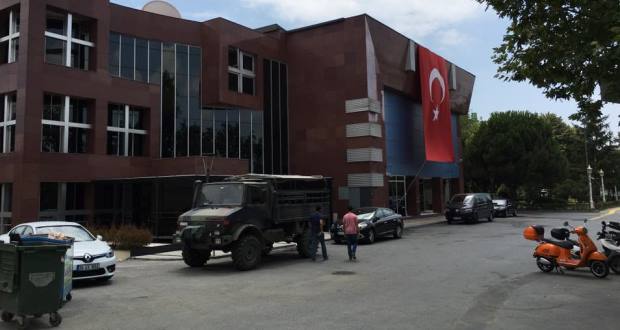 South African MUHAMMAD KARIM, who lives and works in Istanbul, describes his experience of the attempted coup in Turkey on Friday night.

It started as aÂ standard Friday night: meeting up with friends for supper, going to watch the BFG and playing with my friends’ kids. On the way home, we got a Whatsapp message telling us the army have occupied the TRT World HQ, our workplace. Immediately, we jumped onto Twitter to see what was going on and it was there we suddenly got a glimpse of the first stirrings of the coup attempt.

After meeting up again with everyone and deciding our next steps, it was clear the army was in control of Istanbulâ€™s two key bridges, the airport and the national broadcasterâ€™s HQ (TRT) and stopped all broadcasts. The one key message from all of this was that there was a curfew in place and that everyone was told to go home.

And so we bedded down in a friend’s apartment and immediately got to work getting as much information as possible, connecting with everyone we knew on Whatsapp, and sharing the latest information we have access to over social media. Given that social media and the internet kept getting blocked and throttled from time to time despite using VPNs, it was difficult to manage.

We were anxious, not knowing what this all meant, what the future held. Would we need to get out of the country? But the airports were blockedâ€¦ we need to stock up on supplies, we need to withdraw money. We quickly transferred whatever we have to our overseas bank accounts knowing full well the banks will only do anything like that only on Monday.

Calming our families who were overseas and worried, it seemed the news being broadcast there didnâ€™t paint a pretty picture. All the while when we looked outside our window, everything was quiet with only the lights of the traffic in the distance which was heading to one of the bridges.

Once we saw Erdoganâ€™s message being broadcast about encouraging citizens to go out into the street, we noticed the change outside. What was quiet suddenly turned to a lot of hooting and some sporadic gunfire. Helicopters were circling the city with their lights off, fighter jets were flying loud and unseen across the sky.

At about 1.30am, we sat up in confusion when about a dozen mosques started broadcasting the call to prayer over their loudspeakers. All the prayers were finished for the day and this is what made us look at each other and the clock, realizing suddenly that they were calling people to come out, into the streets to challenge the curfew in place. It was then we started seeing the situation change, the Bosphorus bridge traffic start to move, news of people on the ground stopping the army and disarming them. The anxiety lifted slightly with ever increasing hope taking its place.

Between then and the early morning at 6am when we slept, the night was punctuated with the adhaan being constantly given from various mosques, gunfire, loud helicopters overhead and the flight of fighter jets which hit sonic boom over the city twice, shaking every window and shutter in the house and making us deathly afraid it was an explosion of some kind.

But by the end, we were calmer, seeing the coup perpetrators being so easily taken over and their plan dismantled piece by piece. Seeing our colleagues outside the TRT offices in defiance of the military presence. We could see the change coming but were too tired at 6am to carry on and went to bed. By the time we all got up at 11am and checked our phones, it was mostly over and we headed to work again to manage the fallout of the previous nightâ€™s surreal events.