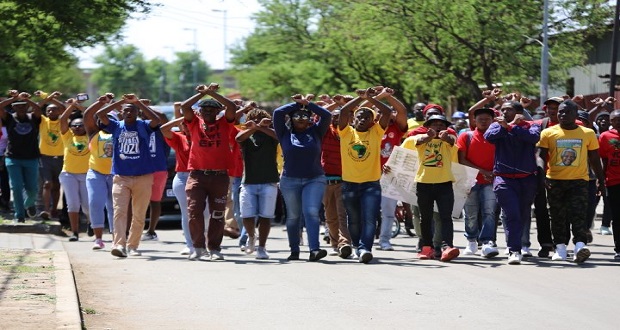 On Tuesday, 17 students at the University of Johannesburgâ€™s (UJ) Soweto Campus were arrested for blocking the entrance to the campus. They appeared in court on Wednesday and were charged with public violence.Â All were released except for one of the students (the SRC chairperson) who had already been out on bail when he was arrested. The Daily Vox spoke to one of the students that was arrested, Hasan Abdulaahi Malin, about his experiences.

Initially, I was not part of the strike. I am SRC but I was not part of the strike due to an international issue that I have, due to a previous warning I have. So I could not participate in any strike. The day before yesterday [Tuesday], I got a call from the students to assist them. I walked to the security and police and engaged them. I asked if they could give me a time to please assist our students [so] we can have a planned march where they want to protest and all those things. They said I could go talk to them. While Iâ€™m talking to them I was arrested, I was part of those arrests.

They told me that we were contravening a court order, we could not cannot actually form a mass meeting without a notice of five days, we cannot protest unlawfullyâ€. But they [private security and police] had orders from I donâ€™t know where. They had orders to arrest us.

But after we were arrested, the helicopter came. Helicopters were used to control small number of students.

The bouncers were targeting everyone, whether they see you in the streets, whether you are a lecturer or a student. So itâ€™s sad, what happened on Tuesday. Students are complaining. Tuesday has become a day to remember from Soweto campus. It was really so bad. Itâ€™s like they were fighting Boko Haram.

From the studentsâ€™ side, we condemn burning properties and destroying properties. We really condemn it. Now we must engage. We need to engage. Some students are in exile, they ran away from the bouncers.

Now Iâ€™m sitting here writing an email to the head of academics to ask for extensions because what happened was traumatising. The management stated that classes were normal but thatâ€™s not the case. Due to the disruptions for the past two weeks, classes were not conducted normally and that has a major impact on the studentâ€™s academics. The work was not fully covered by the lecturers and this has handicapped the process of learning. We really want to conscientise management about this.

Today [Thursday], I was making a petition from the students actually asking further time to write our tests and assignments. So by doing that, I was actually removed by bouncers. They told me I was not allowed to write a petition. I asked them why. They said, maybe you are writing this petition because you want to remove the bouncers. I told them that it has nothing to do with that, it has to do with academics. They told me to come with them to the security officer, they came to me with seven bouncers. The told me they would force me if I did not agree to go with them. And when I was using my phone to take pictures they told me I will regret it. I donâ€™t know what they mean.

I was asked by many students to do something, to write a petition for an academic and procedural purpose. But they told me I am not allowed because I was arrested.