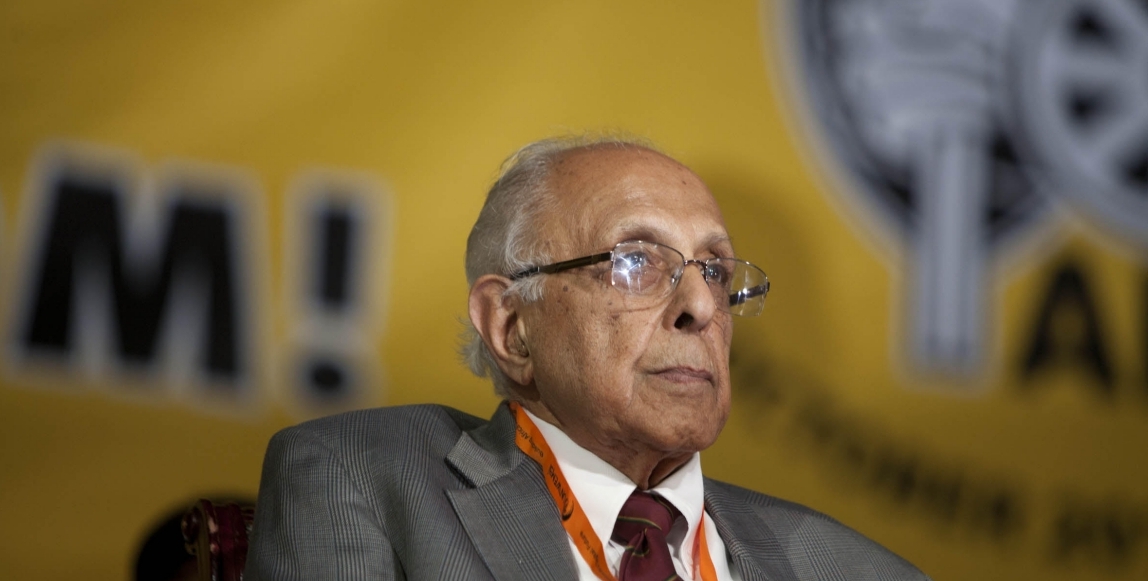 On Monday, President Jacob Zuma recalled Finance Minister Pravin Gordhan from a trip to London where he was set to meet with investors.

It’s widely suspected that Zuma is preparing to ax Gordhan and deputy finance minister Mcebisi Jonas, and to replace them with a more pliable minister who will not stand in the way of the aspirations of those who would raid state coffers for their personal benefit.

In 2016, after the president fired former finance minister Nhlanhla Nene without reason and replaced him with backbencher Des Van Rooyen, struggle stalwart Ahmed Kathrada, who died this morning, wrote to Zuma, asking him to resign for the benefit of the country.

Read the full letter below.

I have agonised for a while before writing this letter to you.

I am just a rank-and-file member of my ANC Branch. However, even before the ANC opened its membership to non-Africans in the 1969. I was involved in the activities of the ANC, the South African Indian Congress, the SACP and Umkhonto we Sizwe.

In the Defiance Campaign Trial of 1952, I was among the 20 accused who were sentenced to 9 months imprisonment, suspended for 2 years.

In the 1963-1964 Rivonia Trial I was among the 8 accused sentenced to Life Imprisonment. Together with Comrade Walter Sisulu and others I was released in 1989. Comrade Madiba was released about 4 months later.

I am immensely grateful to the ANC for the privilege of serving on the first NEC after its unbanning.

In 1997, I stepped down. I also benefited from the experience of serving for one term as Parliamentary Counsellor to President Mandela, after which I stepped down.

I am of course aware that this does not automatically bestow on me the right to address this letter to the President.

However, in all these years it never occurred to me that the time would come when I would feel obliged to express my concerns to the Honourable President.

It is, therefore, painful for me to write this letter to you. I have been a loyal and disciplined member of the ANC and broader Congress movement since the 1940s.

I have always maintained a position of not speaking out publicly about any differences I may harbour against my leaders and my organisation, the ANC. I would only have done so when I thought that some important organisational matters compel me to raise my concerns.

Today I have decided to break with that tradition.

I did not speak out against Nkandla although I thought it wrong to have spent public money for any Presidentâ€™s private comfort. I did not speak out though I felt it grossly insulting when my President is called a â€œthiefâ€ or a â€œrapistâ€; or when he is accused of being â€œunder the influence of the Guptasâ€.

I believed that the NEC would have dealt with this as the collective leadership of the ANC.

This might be technically correct but in my view it is against the best traditions of our movement.

The peopleâ€™s interest must at all times remain supreme.

In this instance it was clearly not the case. The resultant crisis that the country was plunged into was clearly an indication that the removal of the Minister was not about the interests of the people.

The unanimous ruling of the Constitutional Court on the Nkandla matter has placed me in an introspective mode and I had to ask myself some very serious and difficult questions.

Now that the court has found that the President failed to uphold, defend and respect the Constitution as the supreme law, how should I relate to my President?
If we are to continue to be guided by growing public opinion and the need to do the right thing, would he not seriously consider stepping down?

I am not a political analyst, but I am now driven to ask: â€œDear Comrade President, donâ€™t you think your continued stay as President will only serve to deepen the crisis of confidence in the government of the country?â€

And bluntly, if not arrogantly; in the face of such persistently widespread criticism, condemnation and demand, is it asking too much to express the hope that you will choose the correct way that is gaining momentum, to consider stepping down?

If not, Comrade President, are you aware that your outstanding contribution to the liberation struggle stands to be severely tarnished if the remainder of your term as President continues to be dogged by crises and a growing public loss of confidence in the ANC and government as a whole.

I know that if I were in the Presidentâ€™s shoes, I would step down with immediate effect. I believe that is what would help the country to find its way out of a path that it never imagined it would be on, but one that it must move out of soon.

To paraphrase the famous MK slogan of the time, â€œThere comes a time in the life of every nation when it must choose to submit or fightâ€. Today I appeal to our President to submit to the will of the people and resign.