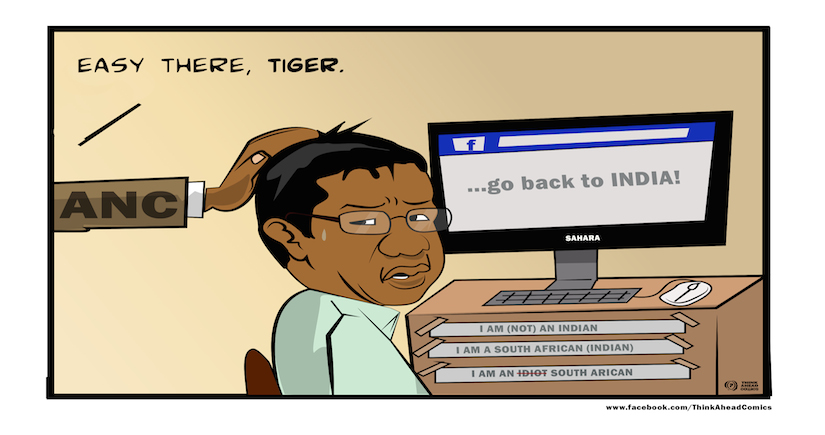 IQBAL MUSA writes an open letter Visvin Reddy, he of “Indians who complain of the ANC must go back to India.”

Your comments, that Indians must stop whining and go back to India, are a little strange, even unclear.Usually, going “back” to where you came from means you hailed from there previously.Currently, most Indians in South Africa were born here and only a handful still living are Indian-born. And the recent migrants from India or Pakistan, who’ve arrived over the past decade, aren’t citizens and won’t be voting, so what exactly is this man talking about?South African Indians fought in the struggle against apartheid, helped build this country and still contribute to the betterment of South Africa. In other words, Visvin, we are South Africans, cuzzie!Naturally, your comments have caused quite a brouhaha among not only the Indian community, but the entire country at large. And what did you expect?“I was an idiot.” You said it, brother. And I can’t lie. Most of us see that to be most accurate thing you’ve said to date, even though we know you have retracted your comments (under some duress).And now, the ANC has disowned you for political reasons, and the Indians for personal, and you find yourself between a rock and a very hard place, somewhere near Umhlanga.I only wonder if you are actually a DA supporter and promoter in secret because you have just cost the ANC dearly. Many of your bras are switching to the DA.But don’t worry, Visvin.You have only been suspended, not deported to where you think whiners should go.The new and latest definition of a whiner is someone who complains about corruption.And the when the dust and the smoke subsides, as they do after a battle or a cattle run, you will be probably rewarded as you had the guts to say what your party don’t dare to.And even though you appear to have been left in the lurch, people always look after their own.Unless of course, you belong someplace else.Best,Ikbal MoosaIkbal Moosa is a South African technician and wholesale store manager in Durban. He writes when amused, or annoyed. Which is pretty much every other day.