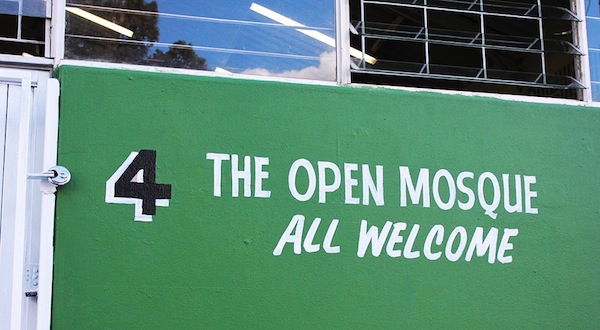 Muslim gender activists have for years pushed for women to be included in the main section of the mosque, without barriers and without stigma. And yet the Open Mosque, which opened last week in Cape Town, has drawn criticism from feminists and hard-liners alike.

Muslim feminists have taken issue with the abrasive personality of its founder, Taj Hargey. The conservativeÂ ulemaÂ meanwhile argue that our mosques are already â€œopenâ€.

â€œI do not know of any mosque in South Africa where people stand at the gates of the mosque and say ‘you have committed such and such sin, you are not allowed to enter’. I have never seen it happen; it has never happened,â€ says Maulana Ebrahim Bham, of the Council of Muslim Theologians.

Letâ€™s ignore for a moment the fact that women are consistently denied entrance to many South African mosques, or relegated to back rooms, side entrances and cramped galleries. I think Maulana Bham and perhaps the rest of South Africa may be missing the point.

As a fair-skinned convert, Iâ€™ve resigned myself to the cold or curious stares of others on the occasions when I have attended mosque.

I once went with a colleague of mine to the Houghton mosque in Johannesburg for Friday prayers not long after it Â opened. I tried in vain to find the ladiesâ€™ entrance. Eventually I realised that the ladies were praying in a classroom on the other side of the mosque. Tables had to be moved over to the side of the room before there was enough space to pray, and even then the two other women who had ventured out of their homes to pray in the awful space looked at me with what I could only describe as fear and loathing.

My colleagueâ€™s experience of the mosque, meanwhile, had been an uplifting one. Not to put too fine a point on it but, while we are both converts, he had a penis and more or less the right colour skin. So he heard theÂ khutbahÂ (Friday sermon), saw the beauty of the mosqueâ€™s architecture and dÃ©cor, and felt the togetherness of the congregation. I had none of those privileges. When I got married to my husband in 2008, I wanted to know if my parents would be able to come for theÂ nikkahÂ (marriage ceremony) at the Sultan Bahu mosque in Mayfair, Johannesburg. The imam informed me that the womenâ€™s gallery, where theÂ nikkahÂ was to take place, was â€œnot consecrated as part of the mosqueâ€ so non-Muslims could come to witness the ceremony.

The revelation rankled. Why then should women even bother to come to these non-consecrated spaces?

The mosque is not supposed to be an empty shell devoid of any purpose other than for people to pray and leave. No, itâ€™s supposed to be a community centre that holds its people together and invites others in, to experience the religion.

Gay Muslims, women who do not wear hijab, people who have relationships outside marriage and other space oddities are indeed â€œallowedâ€ to come to mosque, but what they really need is someone to welcome them and talk to them. What they need is acceptance as human beings and not to be told, as some gay Muslims are, that they might be possessed by demons. Thatâ€™s where we are not â€œopenâ€.

I have on several occasions had the pleasure of worshipping at a Shia mosque in London. It was one of the most welcoming, family-oriented and spiritual places I have ever been to, despite the fact that the mosque was a run-down pre-fabricated building that used to be a temporary school. The atmosphere was open and friendly, debate was robust and women were completely and equally included.

In South Africa, when I mention what I have learned about the way that Shias worship and conduct their affairs I am subjected to angry tirades about how â€œthey are not real Muslimsâ€.

Another welcoming place of worship that Iâ€™ve been to was a church in Great Missenden, England, where the church organist had no reservations about having a Muslim visit. She asked me questions about Islam and told me about the volunteer work she does annually at refugee schools in Palestine. I felt humbled to meet such an open-minded and pure-hearted person.

All of this leads me to wonder if there could be any religious group in South Africa less welcoming or tolerant of diversity than the Muslims.

The majority of Muslims in South Africa are those of Indian heritage. Many are still restricted to marriage along old lines of caste andÂ ghamÂ (village of origin), and anything that goes against their definition of normal is aggressively rejected.

One of the very basic tenements of Islam teaches adherents never to discriminate along racial lines. But racial discrimination against â€œoutsidersâ€ occurs on a daily basis in mosques and in homes. Non-Muslim Indians, coloureds, Malays, blacks and whites who venture into the fold of Islam are all viewed with suspicion.

â€œTheyâ€™re just not like us,â€ they whisper to their children. â€œBetter to marry into families we know.â€

Itâ€™s not everyone who behaves this way. I have a wonderful and respectful relationship with my in-laws, but the same may not be said for many other converts and those who marry outside theÂ ghamÂ of their forefathers. Marriages break and converts leave Islam because of the way they are treated and I believe that the fanatics who rejected them will have some questions to answer when the day comes.

The real problem is not closed mosques, it is closed minds. Imagine if these closed minds could become inquiring, compassionate minds, ones that celebrate differences of opinion and welcome debate. We cannot open our mosques unless we first open our minds. HajiraÂ is half-British and half-Seychellois, and a complete keyboard warrior. An old hack since her days of sub-editing newspapers in Polokwane, she moved into radio broadcasting and then into public relations because it paid better. After moving to the Seychelles in 2013, she rediscovered her love for being a newswoman and currently writes for the Seychelles News Agency. She has published a collection of short stories and is currently working on a bizarre novel. Follow her on Twitter.