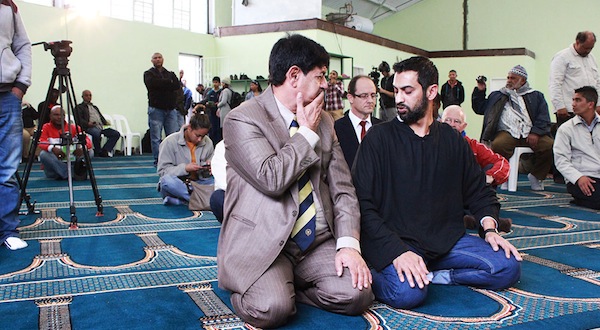 TheÂ controversial Open Mosque launched in Cape Town on Friday amid protests and calls for the mosque to be boycotted. Members of the media and critics outnumbered the congregation on Friday and founder Taj Hargeyâ€™s sermonÂ was interrupted by attendees whoÂ called him a â€œfraudâ€ and told him he would â€œgo to jahannam (hell)â€. RAâ€™EESA PATHER asked people at the mosque what they thought of it. Ederis Smith, 22, mechanical worker, Mitchellâ€™s Plain
In other mosque, they welcome Christian and Jews, but they cannot pray in the mosque. So how can you allow a Christian or a Jew to pray in a mosque? The mosque is place for Muslims to pray only.Â  At the end of the day, we donâ€™t tell people not to come to the mosque. Anyone can walk into a mosque all over the world, but you canâ€™t pray there in the mosque. Secondly, how can he have an open mosque that accommodates people who are lesbian or gay? Elspeth Muirhead, 59, pensioner, Muizenberg
Iâ€™m coming to support an establishment of a liberal mosque, because Iâ€™m a Unitarian and we draw wisdom from the worldâ€™s religions. I think the inter-dialogue between Christians and Muslims is essential to todayâ€™s world. This mosque is standing for a contemporary interpretation of Islam. Iâ€™ve heard and Iâ€™ve been impressed by whatâ€™s been expressed about the greater involvement of women in this community and the equality. Gawa Safedien, 62, pensioner, Wynberg
I came here because itâ€™s a mosque and I want to see the new mosque. The controversy is silly, Iâ€™m not against what theyâ€™re doing but still. We come to pray here, people just want to make their salaah (prayers). Thatâ€™s whatâ€™s fard (obligatory in Islam).Â  I also think gay people cannot help how they are born, and they just want to have a mosque. I think people have acted unfairly to it. Bilalal Ghorieb, 28,Â  sheikh (religious leader), Mitchellâ€™s Plain
This is wrong, it must be stopped. If you have a right to do a thing, donâ€™t wipe it in religion. As Muslims these things hurt, we must stand for our religion. In Islam, in Christianity, in Judaism, homosexuality is not permissible. Hargey is saying heâ€™s against homosexuality, heâ€™s saying things, and then heâ€™s saying the opposite. They want to start a new thing, but Islam started 1,400 years ago. The world has been united, but it never needed a mosque like this to unite the people. Diane Komie, 50, security worker, Langa
Iâ€™m here today, because I read the newspaper about this. Itâ€™s an open church for everyone, so I just wanted to come in and see whatâ€™s going on; I want to know if itâ€™s only for certain people or what. I donâ€™t want to sit outside and listen to the protestors outside without knowing what is going on inside. It is a mosque, and Iâ€™m okay here because I pray, and it doesnâ€™t matter where you pray. Nasief Miller, 36, pool technician, Mitchellâ€™s Plain
I came to protest against whatâ€™s happening here and just to see whatâ€™s going on inside. What happened inside is not permissible in Islam, itâ€™s just not right. He [Hargey in his sermon] mixed Islam with the Christian religion. He quoted out of the Bible and out of the Qurâ€™an. The New Testament has nothing to do with Islam. Thereâ€™s no changes to the Qurâ€™an, it has always stayed the same, you cannot make changes to it. Itâ€™s actually sad.