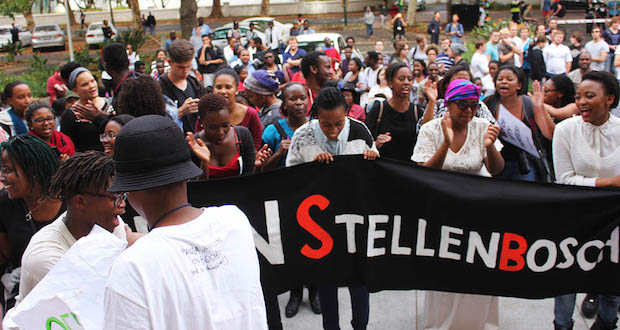 Sikhulekile Duma, 20, spokesperson for Open Stellenbosch
When I arrived here I realised that there were many discriminatory practises in Stellenbosch and I didn’t feel comfortable because of the colour of my skin. When we tried to engage the university last year through different organisations to say that black students are suffering, the university wouldn’t listen to us, and if black students were abused, the university wouldn’t act. People are treated differently according to their skin colour. I cannot allow that in a democratic South Africa, we continue to have these issues. When the chance came to be involved in Open Stellenbosch, I took it, because we’ve identified a big problem. When we engage with management politely, they always say: “We will discuss it next year.” So, we’ve had to be more forceful in the way we ask, but we’ve never been violent in any way. Our demands are that all classes and signage at the university should be available in English, their translator devices must go, and all meetings and correspondence should be done in English. Ludwe Mtakati, 20, member of Open Stellenbosch
I support the movement because it’s for the equality of all students. Here at Stellenbosch we are treated as though we are a sub-species of human. They treat us as though because we’re black, we don’t have certain rights. Open Stellenbosch is movement with just a bunch of students. Anyone who believes in our values can join the movement: we have no leadership, because everyone who is a part of the movement, leads it. We don’t want hierarchy, but specifically, everyone has experienced these issues personally, so it would be unfair to select someone to represent us when they might not know your pain as deeply as you know it yourself. We had the speculation that the university leadership isn’t serious about transformation, and the vice rector’s comments hurt me. It just confirms that they still think of this university as an Afrikaans university, and he said it twice which means he is quite sure of what he’s saying and he’s all for not transforming. Lucy Douglas, 20, member of Open Stellenbosch’s communication committee
I support transformation, I support justice, and I support equality – that’s why I’m here. The university’s institutional racism, the exclusionary methods used to ‘other’ black students and non-Afrikaans speakers needs to stop. I’m guessing most of the students who disagree with the movement are white students and from them I would want to know why they are so afraid of change. They need to check their privilege. As a white student, I will never understand black pain, but by acknowledging my own privilege, there’s a way forward for change. My life here as a white student is much easier and I don’t have to be part of this movement, but living on campus, going to university here and being among people with such conservative and closed-minded views has sunk me into such a depression that I don’t see the humanity. It’s like the remnants of apartheid live here. Mwabisa Makaluza, 28, member of Open Stellenbosch
Things have not changed, the lived experiences of students are still the same and we are bringing these concerns to management. I’ve been on campus for eight years, and walking in and seeing the plaque of Hendrik Verwoerd has always felt really damaging. Having been taught in Afrikaans, and still being taught in Afrikaans, going to class and not understanding – these have all been part of how Stellenbosch has excluded me as a black student. My home language is isiXhosa. It-s been struggle upon struggle to get to where I am as a PhD student. I’ve had to walk around res and ask people to translate for me. It’s good that the management is removing the plaque of Verwoerd, but we, as Open Stellenbosch, are calling for full transformation. Eva Kimani, 21, Open Stellenbosch supporter
Every time we ask management to listen to us, they give us statistics on what they are doing instead of actually listening to us. I wouldn’t be as frustrated as I am if they were doing something. I’m an international student from Kenya. Before I came here, I remember calling the university and asking them if I would have a problem when I came here with the language. They told me no, my course, BComm management science, is supposed to have separate Afrikaans and English classes. First year was okay: I didn’t even know I was in an Afrikaans university – it was fine. Second year was fine. Third year, first day of the semester, I’m hearing Afrikaans, and there was no way I was going to learn Afrikaans fast enough to be able to understand. I usually perform very well, but my marks dropped by half. It’s a real thing and it’s not only me – it’s an experience many students have.

* Voxes have been edited for brevity and clarity. All images by Ra’eesa Pather.