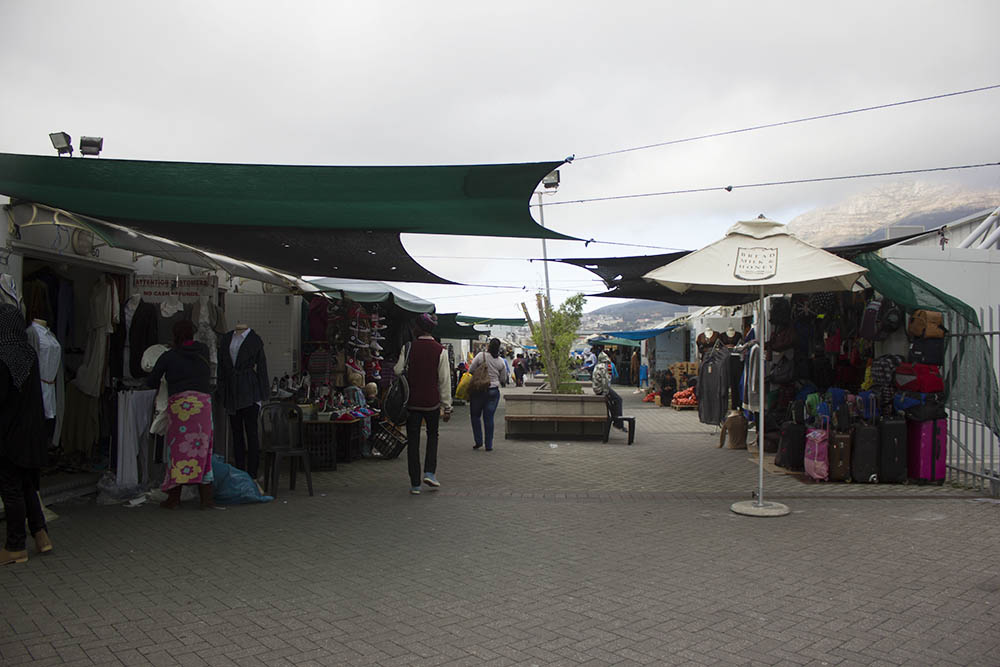 On Saturday, 86 African immigrants were arrested in a joint operationÂ conducted by the SAPS, the SANDF, traffic officers, the metro police, brandÂ specialists and immigration officers. The lockdown at Cape Townâ€™s StationÂ Deck â€“ a taxi terminus and market above the inner-city train station â€“Â brought commuters to a halt. Counterfeit goods were confiscated, daggaÂ was seized, and a taxi was impounded. In the chaos, authorities went store-by-store asking people for their documents. People at the station toldÂ RAâ€™EESA PATHER how the raid unfolded.Â Fatima Nyondo*, 26, hairdresser, Lansdowne, from Malawi
I didnâ€™t know what was happening. I just came to the train station and when IÂ came upstairs, everything was closed. The police told us that we canâ€™t enter.Â There were many people: police, army, and law enforcement. Downstairs thereÂ was nothing, they didnâ€™t ask anyone about papers. I have my papers, but myÂ papers are expired. If they saw my documents that day, they would arrest me. IÂ didnâ€™t renew them, because people say that to go to Home Affairs you must payÂ R2,000 to make the new documents. You need money and I donâ€™t have money. ItÂ makes you feel pain, because they arrest you and they take you away, and youÂ donâ€™t want to go. Thereâ€™s no jobs in Malawi. My friend, she works here, and sheÂ was arrested. I spoke to her on the phone â€“ I asked her where she is; she said sheâ€™sÂ by the police but she donâ€™t know which police station. She say she donâ€™t knowÂ anything. When I tried again later, her phone was on voicemail. Mwanyange Ubao Mohamed, 37, informal trader, Salt River, from Tanzania
There was police, army and immigration. They were looking for those peopleÂ who live in South Africa without documents. They asked me for my document: IÂ take my passport and showed them, and they left. Iâ€™ve been here for five yearsÂ already. Nothing like this has happened to me. Most of the people didnâ€™t haveÂ their documents, and there was nowhere to run â€“ it was all over the place. I sawÂ they arrested a woman, but she was back here yesterday. She didnâ€™t have herÂ document on Saturday, but she maybe asked her kids to bring it to the police soÂ she could be released. The police are not wrong, because you canâ€™t live in aÂ country without documents. But the army thing, I donâ€™t understand why they areÂ here. They carry those guns like itâ€™s war here. If you come to search the peopleÂ like that, itâ€™s not good, because even today some shops didnâ€™t open because theÂ people were worried about that. Noluvuyo Faye, 32, informal trader, Gugulethu, from South Africa
The police, they come to theÂ shop next door all the time, and they get nothing. Itâ€™s a Nigerian shop, and eachÂ and every time they search they find nothing, but they still come back. WhenÂ they came Saturday, they went next door and they said they heard that shop isÂ open 24/7. We pay rent; itâ€™s none of their business if we open 24/7, and the wayÂ we are paying the rent, they donâ€™t give us choice. If you donâ€™t have money, itâ€™s notÂ Prasaâ€™s (Passenger Rail Agency of South Africa)Â problem, so you must make money the way you know how, which is toÂ open 24/7. After they search the shop, they make the shop upside down. TheyÂ leave it just like that, and they said: â€œItâ€™s not the last time you will see me in thisÂ shop.â€ Maybe they hear that the Nigerians are selling drugs, but itâ€™s not all theÂ Nigerians. Iâ€™ve been working in-between them for some time now. Itâ€™s not all ofÂ them that are doing the same things. But the way the police are treating people isÂ not good. Most South Africans use what they hear: like they hear Nigerians areÂ selling drugs, but there is South Africans selling drugs. There is South AfricansÂ doing fraud. But itâ€™s because these people are not from this country that they getÂ treated like that. Kelvin Nwobu, 25, informal trader, Langa, from Nigeria
My boss got arrested. I guess they are doing their jobs, because there a lot ofÂ illegal immigrants. But at times they could give them grace, because peopleÂ who apply donâ€™t always get their papers. So, people have to be given papersÂ when they apply, because if it doesnâ€™t happen, the police will come and take thatÂ person away. If they donâ€™t want people to come then they should just close theÂ borders or make it hard to enter. Not when someone is here you try to take theÂ person out. You donâ€™t know the reason the person is here, maybe heâ€™s notÂ comfortable in the place he was or he has found South Africa is a home. I felt soÂ bad for my boss, we went to court today to see if heâ€™s going to be bailed out. I know itâ€™s a response toÂ xenophobia, and they want to clear the illegal immigrants to make sure theÂ people thatâ€™s staying here is legal. But they should take it easy, because they areÂ showing people that they really want people to get out of the country. They areÂ making it worse. They need to give it time for everything to calm downÂ before trying to check the immigrants. Fidelis Onyebuchi, 38, informal trader, Milnerton, from Nigeria
When the police ask me for my document, I give it to them because itâ€™s necessaryÂ for one to have the document. They did their job on Saturday: they didnâ€™t come inÂ violently, they came in a good manner. It was not a crime, they did a good job. ItÂ is necessary for people to be arrested if they donâ€™t have their papers. We are allÂ Africans, but there must be rules: nobodyâ€™s above the law. Because of whatâ€™sÂ happened in the past, I look at it like they just want to know how many people are here illegally and how many people are official. Itâ€™s not a good way to addressÂ xenophobia, but they didnâ€™t come on their own, they came through instructions.Â You canâ€™t have a soldier, come out in that manner, with a gun, where there areÂ civilians. In democracy, thatâ€™s not fair, but why I think they do it is to protect, soÂ people can see that something is being done. But Iâ€™m a common man, what can IÂ say? Iâ€™m protecting myself. The only thing I believe is that Africa belongs toÂ Africa. Let people express themselves and their concerns, then you will knowÂ how to help.