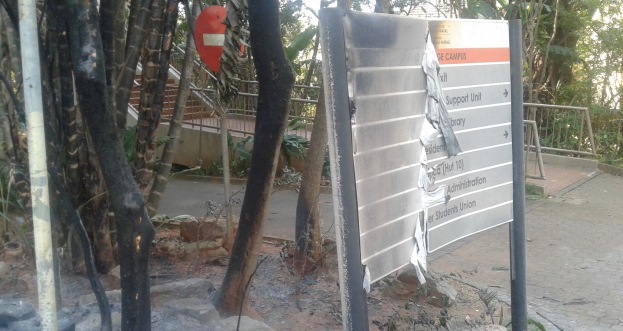 The arson attack on the law library of the University of Kwazulu Natal has dominated headlines about the studentsâ€™ protest but what is the point of burning stuff down? Is it a legitimate mode of protest?

Ntokozo Qwabe – adapted from Facebook
[dropcap]â€œ[/dropcap]There is no point telling us how â€œwrongâ€, â€œcriminalâ€ and â€œshockingâ€ the burning of buildings and ‘private property’ at the University of KwaZulu-Natal, and other universities across the country is. When so called ‘bursts of violence’ take place in South Afrika, we have a tendency of engaging in a futile moralising exercise that sees these ‘bursts’ in isolation – and not as a logical continuity that is a consequence of living in what is one of the most violent societies in the world.

The violence, physical, psychological and structural, forms part of a historical continuum that has always taken place under a black subjugating system of settler colonialism that has existed in this country since 1652, and has continued under the neocolonial ANC ‘democratic’ regime. How, one may ask, does this violence manifest itself?

All analyses that ignore the prior question of a continuum of black violent existence in cases like the UKZN one – no matter how strongly worded, condemning and angry – will not take us any further, and certainly won’t lead us to a solution. A solution cannot ever be found where the prior diagnosis is in fact a misdiagnosis. We need to do better!â€ *Sipho Mkhwanazi, 35, UKZN student, Lesotho
[dropcap]â€œ[/dropcap]I know that the law building was burnt and some parts of the library were also burnt. It has affected me a lot as some of my classes were cancelled; we are not writing tests and not doing presentations that were supposed to be doing right now. Iâ€™m not saying they should stop but I think they must do it peacefully as it will be good for everyone involved, burning and destruction of property will only cause more damage than good.

It is difficult for us as international students who are using sponsors because now we have to go home without planning and our sponsors may pull out.â€ *Thandi Kubeka, 24, student, Mtubatuba
[dropcap]â€œ[/dropcap]I have not heard anything about who burnt the Howard College building but I know some of the SRC members were arrested. Last week, the cafeteria was burnt but no one was ever held responsible so I think but I think it is the same person. It is going to affect me a lot because my tests will be postponed and when they come they will be coming at the same time with a lot of pressure and it will be hard for most students. I came here to see if the library is open so that I can study, but everything is closed I canâ€™t do anything.â€ Dr Richard Pithouse, lecturer, The university currently known as Rhodes
[dropcap]â€œ[/dropcap]There are various ways in which people can choose to respond to oppression. A response like burning the library is not helpful. It alienates the students from many people in wider society. The state is describing the students as Nazis , which I think is ridiculous.

You have a very reactionary state that is willing to engage in repression and a president that is actually hostile to black intellectuals.The university is in a very difficult situation here. As the state’s authority collapses, the people on the right benefit and not the left.

There is a real significant difference between forms of political activism conducted democratically with large groups of people and forms of politics where a tiny group decides to act on their own mandate. To assume that if you just destroy you will have something much better on the other side is just not realistic.

Destroying those books is not going to make things better. It’s going to result in parents who can afford to send their kids elsewhere doing so, and that’s not a good thing for the sustainability of the university.

It’s perfectly responsible to take real action against oppression, and to be opposed a destructive strategy that will make things worse for everyone. Mostly, for the students who have the least resources and opportunities to go elsewhere.

Burning buildings is not a sign of strength but an anti- intellectual sign of weakness, the point would be to engage them critically. To burn them is to be monumentally ignorant about the nature of intellectual work.

Students need to ask themselves why the mass movement that was built last year so quickly collapsed. The movement has made their own mistakes. They need to think about how they can rebuild that. Victories will not be won without alliances and mass-based democratic politics.â€ *Precious Mokoena, 22, student, Umlazi
[dropcap]â€œ[/dropcap]I heard on the news that UKZN was on fire so I came to see what is happening because I last came here on Monday. I think whoever that burnt the building must be charged with arson and destruction to property because now this is affecting innocent people and it is not good for image of the university. This is the second protest this year, it will reflect very badly on us as students because now we will be put under pressure. I donâ€™t know whether the torching of the buildings is related to the protest or itâ€™s something else, it is a confusing situation because you hear that the protest is about fees, the next minute you hear that it is about appalling living conditions in residences and security on campus.â€