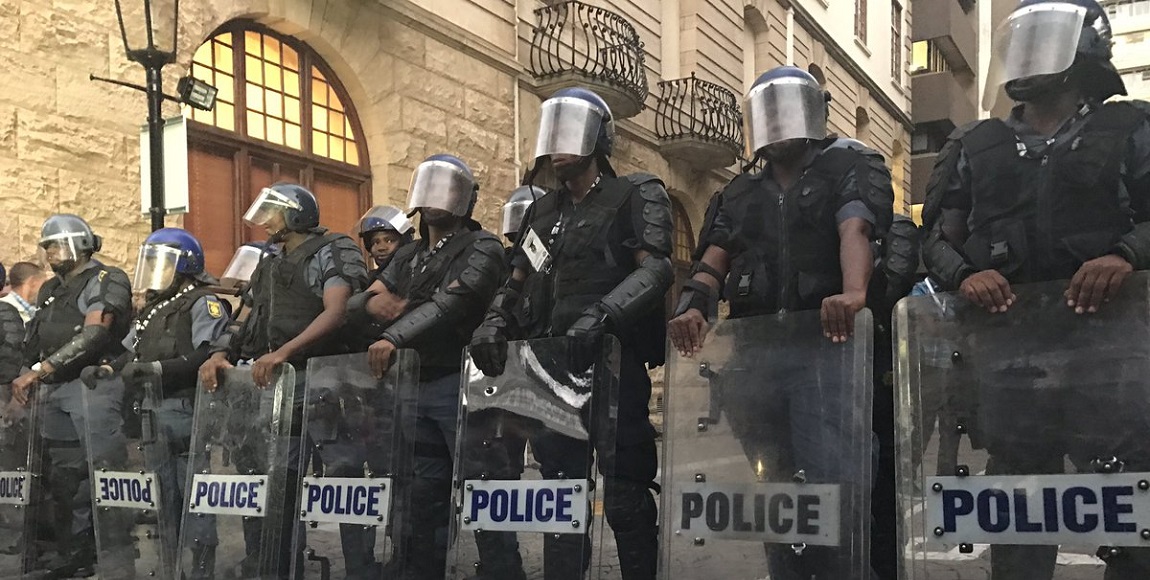 It was evident that what transpired inside Parliament on Thursday night during the presidentâ€™s state of the nation address (SONA) was nothing short of chaos. But if you thought what happened inside was messy, you should know what erupted outside, as told by people on the ground. The Daily Vox rounds up what happened beyond parliamentary walls, according to opposition parties and journalists.

EFFing off from Parliament, onto the street

As expected, the Economic Freedom Fighters (EFF) were removed from the National Assembly for preventing President Jacob Zuma from delivering his state of the nation address. What we didnâ€™t expect was the violent scuffle that took place between the red berets and the notorious â€œwhite shirtsâ€. We saw punches being thrown and the truly violent manner in which EFF members were dragged out.

What we didnâ€™t see was that the fight continued beyond the National Assembly doors. In what seems like the only way protesters and security interact with each other (yes, weâ€™re referring to #FeesMustFall), EFF MPs and security officers pelted each other with helmets and rocks. At least one person was pushed down the stairs.

#SONA2017 [WATCH] EFF Being removed. As it happened pic.twitter.com/bSWiDqjwQG

â€œWe are prepared to leave this parliament being in a coffin, standing for the truthâ€¦ If anything must happen, let it happen now. We are ready for anything!â€ Malema told journalists. He also said the EFF was not afraid of increased police presence.

â€œWe are not going to be intimidated by soldiers, police and by criminals who are hell bent on defending a constitutional delinquent â€¦They are ready to chase people out who break the rules of parliament, but are prepared to defend a man who broke his oath of office,â€ he said.

As Malema spoke, stun grenades went off near the parliamentary precinct. â€œThis place has been militarised. The freedom of movement has been suspended. The ANC has suspended the constitution today. This place has been declared under martial law as a state of emergency,â€ Malema said.

Female #eff Mps that got hurt picked up by ambulance #SONA2017 pic.twitter.com/4yVWFkuHex

The Democratic Alliance (DA) left Parliament shortly after the EFF. Earlier, the DA had observed 30 seconds of silence to commemorate the 94 victims of the #LifeEsidimeni tragedy.

The 94 mentally ill people died under the Gauteng governmentâ€™s watch when they moved the patients from private hospitals to dilapidated so-called non-governmental organisations – which, an investigation showed, were operating unlawfully.

@MmusiMaimane has arrived with his fellow DA MPs holding this banner #SONA2017 pic.twitter.com/VKakMA3KeF

The DA protested parliamentary speaker Baleka Mbeteâ€™s refusal of their request to observe a moment of silence before the address.

â€œWhat is happening in this Parliament says the constitution doesnâ€™t matter. You have a president who violates the constitution. He allows for tear gas to be deployed in the gallery, putting members of SA in danger,â€ Maimane said.

DA says “some sort of gas” is being thrown at protesters outside Parliament. Saying Zuma has broken South Africa. Cries of racism. #SONA2017

Speaking to shielded public order policing members, who were pushing against the journalists who were interviewing him outside, Maimane said: â€œPlease open the way for the press. We have agreed that the members of the press can go through. Please allow the press to move freely. You donâ€™t need to be doing this.â€

Maimane said the South African Constitution does not allow the army and the police to enter Parliament. He said that Parliament is a â€œbroken institutionâ€ and Mbete is â€œsimply there to protect Jacob Zumaâ€.

Speaker and secretary to parliament lied when they assured the nation only ceremonial military on the precinctðŸ‘‡ðŸ»both should be sacked pic.twitter.com/sXV3MXPujA

The DA will be in court applying for a review application.

Mail & Guardian reporter, Dineo Bendile, told The Daily Vox that the riot police were â€œnot particularly violent and aggressiveâ€ towards journalists; they were just trying to quell the chaos.

But they did restrict the movement of some. â€œThere was a point when they tried to block movement of other journalists who were trying to access the area where the DA was trying to exit from,â€ she said.

This was followed by journalists chanting: â€œLet us through!â€

Journalists say they’re not being allowed to cover what’s going outside, EFF MP injured, stun grenades going off outside. #SONA2017

Mosiuoa Lekota, leader of COPE, told journalists: â€œI have been disappointed. I expected it to go bad but I never thought it would come to this.â€

â€œMany of our comrades gave our lives fighting to get the ANC into power, only for it to be taken over by these people,â€ he said.

It doesn’t matter how yu feel abt me or COPE,what matters is,what did we do as a nation to defend our country from doors of doom? #SONA2017