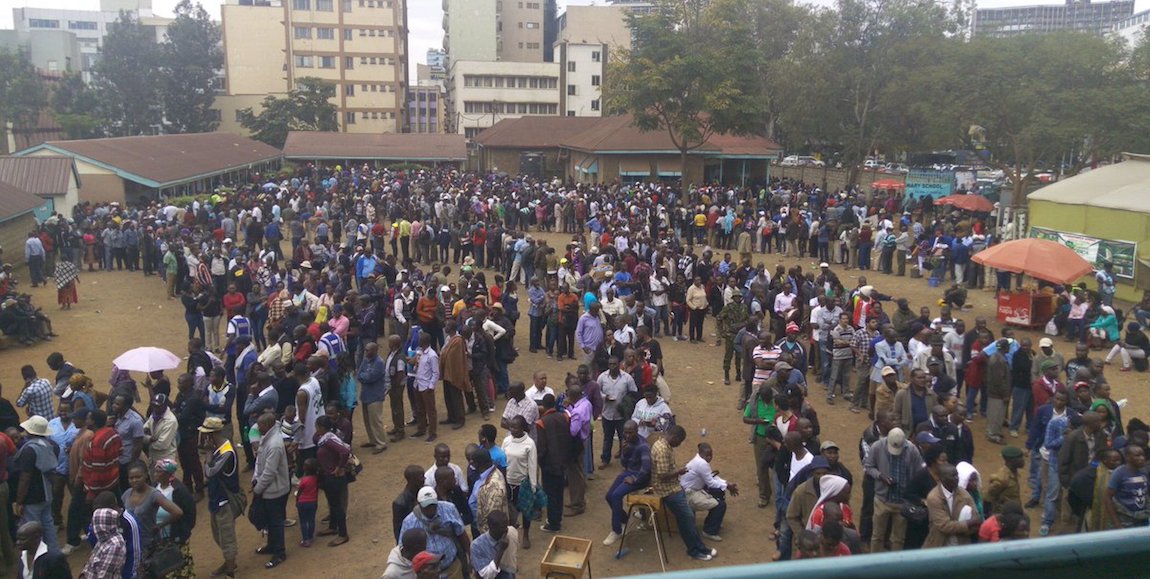 Voters started queueing as early as 2am, according to Caroline Kantai, presiding officer at Moi Avenue Primary School.

Polling centres officially opened at 6am. Some centres opened late due to poor weather conditions, the delayed arrival of voting materials and problems with the Kenya Integrated Elections Management Systems (KIEMS), which verify votersâ€™ biometric information.

Kantai said some polling stations had problems verifying biometrics because votersâ€™ fingers were sweaty or oily, or because â€œthe machine just failed for one reason or the otherâ€. In cases like these, polling clerks verified votersâ€™ identities manually, using their identification documents.

The Independent Electoral and Boundaries Commission (IEBC) assured Kenyans that the hitches were dealt with.

IEBC chair Wafula Chebukati said Nairobi had the highest number of registered voters and that there were a few challenges. â€œIn some polling stations in Embakasi East, Kasarani and Westlands we have experienced delayed opening. We have immediately replaced the returning officers in these three constituencies and deployed Commissioners to ensure efficient management of these locations,â€ he said.

Chebukati said centres that had experienced delays in opening would close later to compensate.

In areas where polling stations opened late, the same amount of time lost will be allocated for voters ~ @WChebukati #WeweNdioKusema

Voters told The Daily Vox the voting process is easier than in the previous election because queues have been organised alphabetically this time.

â€œThis is my second time voting and it has been easier compared to previous election because it took us hours on end to vote. If you have one of the common names, you’ll be here for long. But it’s not as bad as last time,’ said Sedar Malaki, who was voting at Langata Road Primary School.

Sedar Malaki @MalakiOddenyo has cast his vote at Langata Road Primary. This is his second time to vote #ElectionsKE2017 #ElectionsKE pic.twitter.com/OdWOxOI6Tf

There have also been reports of incidents of voter bribery and of polling officials abusing their office. In the Embakasi South constituency of Nairobi, an elections officer stamped â€˜rejectedâ€™ on the back of ballot papers.

The IEBC said these ballots would not be considered as invalid as rejected ballot papers are stamped in the front and not the back. The officer involved has reportedly been fired.

On Monday, a Bomet County officer was also arrested for campaigning for the incumbent governor Isaac Ruto, in defiance of regulations that prevent anyone from trying to â€œunlawfullyâ€ influence voters or the outcome of the election.

As the last voters cast their votes, international observers have praised the elections and commended Kenyans for a peaceful process.

The IEBC have up to seven days to announce the election results, which can be accessed on the commissionâ€™s portal.