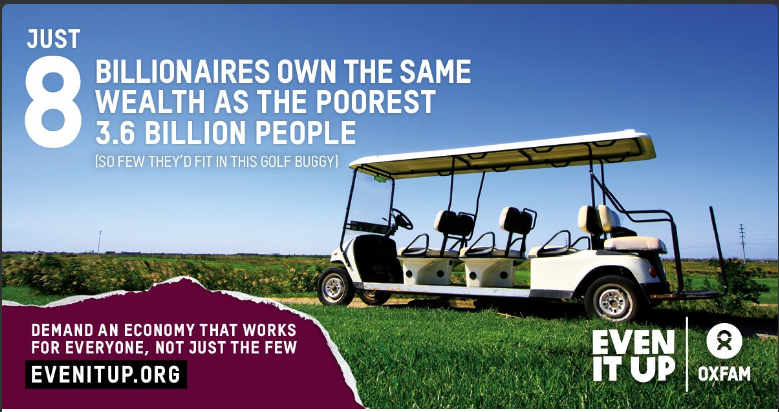 On Tuesday, Oxfam released its annual inequality report, An Economy for the 99%. The Daily Vox takes a look at the report and what it says about closing the inequality gap.

Why is the report important?

Oxfam is an international organisation that aims to mobilise people against poverty. It releases an annual report looking at how we can end poverty and inequality. This yearâ€™s report looks at how the super-rich and large corporations are driving the inequality crisis and what needs to be done to change this.

â€œLeft unchecked, growing inequality threatens to pull our societies apart. It increases crime and insecurity, and undermines the fight to end poverty. It leaves more people living in fear and fewer in hope,â€ reads the report.

What is causing this inequality?

The report shows that over the past 25 years, the top 1% have gained more income than the bottom 50% combined. Basically, the profits are going up the corporate ladder instead of trickling down. Corporations and the super-wealthy play an important role in widening this inequality gap by engaging in a range of activities.

1. Increasing wages
Weâ€™ve been seeing a rise in the incomes of CEOs while the wages for producers and ordinary workers have barely increased. For example, while South Africaâ€™s CEOs earn far less than their US counterparts, they earn 541 times more compared with our countryâ€™s average income.

For some workers the situation has worsened, with forced labour and even slavery being used to keep costs down. The International Labour Organisation estimates that 21 million people are forced labourers, generating around $150 billion in profits each year. So those at the top get richer, while those at the bottom get poorer.

2. Dodging taxes
For some corporations and individuals, maximising profit means paying as little tax as possible. Thatâ€™s when they start using tax havens, where they hide their assets in offshore accounts in an attempt to avoid high tax rates. One of the biggest data leaks ever, the Panama Papers, exposed the assets of political officials, celebrities and sports stars which were hidden by a Panama-based law firm.

While this leak was a great step in exposing these individuals, it didnâ€™t necessarily address the problem. It also doesnâ€™t help that corporate tax rates are falling all over the world, ensuring that these corporations and wealthy individuals pay as little tax as possible anyway. In the report, Oxfam states that developing countries lose $100 billion to tax dodging every year – and theyâ€™re the ones that need it the most.

3. Maximising profits
More and more corporations are being driven to maximise returns to shareholders. The aim being not only to maximise short-term profits, but to pay out a greater share of these profits to the people who own them. This means that the rich benefit even more because the majority of these shareholders are already among the richest in society.

In numbers, Oxfam says that the worldâ€™s 10 biggest corporations have a combined revenue greater than the combined government revenue of 180 countries. Scary stuff.

4. Buying power
Many corporations use their influence and power to ensure that regulations, as well as national and international policies, are shaped in a way that profits them – literally and figuratively. Cronyism and nepotism are issues especially where corporates appoint friends, family, and associates into different sectors to ensure that the rules are written for them.

That aside, they also use their power, influence, and connections to capture politics. They may use their fortunes to buy the political outcomes they want, to influence elections, or to buy public policy. Sounds a lot like the situation in South Africa with the Gupta family, donâ€™t you think? What can we do to change this?
The report says that we need to change certain assumptions that drive the economy. These assumptions drive the investments, policies and activities of businesses, governments and wealthy individuals.

Assumptions such as: the role of government should be minimised in the marketplace, the planetâ€™s resources are limitless, and that our economic model is gender-neutral need to be challenged and changed. These, along with others mentioned in the report, need to be addressed so that we can develop a different way of running the economy to benefit those who need it most.

If you want the TL;DR versionÂ of the report, you can get that here.