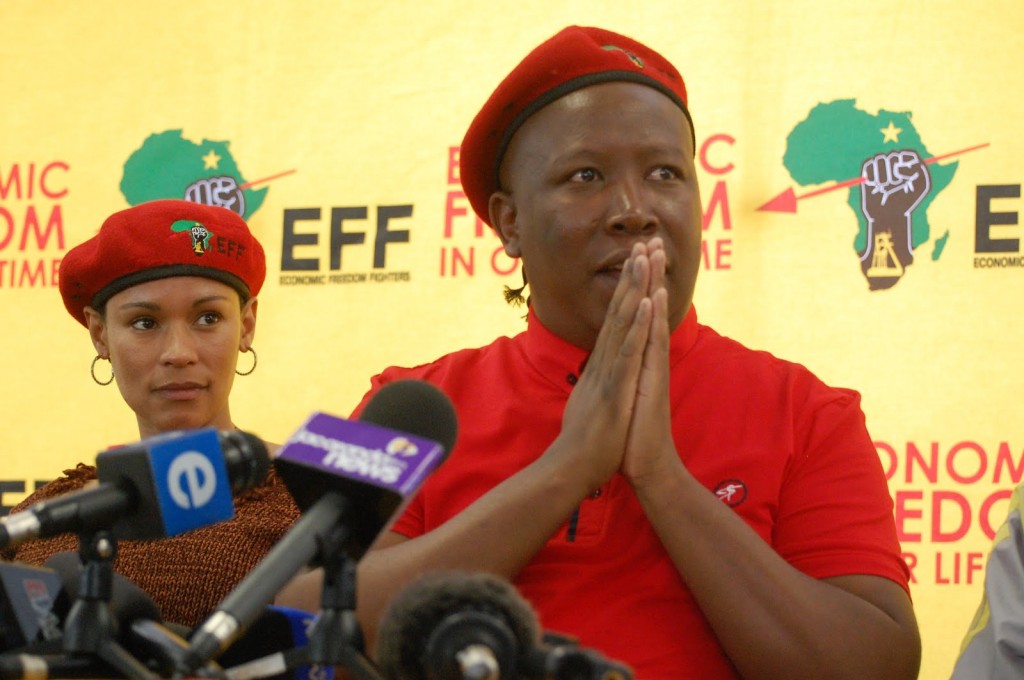 On Saturday, Mehlareng Stadium in Tembisa was painted â€œred for dangerâ€. More than 20 000 EFF supporters were there to witness the unveiling of Julius Malema’s EFFâ€™s election manifesto. It detailed the plans that the â€œRed Revolutionâ€ has for South Africa. Buzzing with excitement and hope, these supporters are quite confident that their leader and party are the radical change the country has been waiting for. By UYANDA SIYOTULA

The reason why I joined EFF is because it is very different and unique from other parties. Right now we need a radical party. We cannot afford to be moderate, otherwise we will not get what we want. It is time for change. I mean 20 years into democracy we are still the same community we were in 1980. EFF promises the expropriation of land without compensation and nationalization and that just sets it apart from the other parties. When it comes to elections, though it is difficult to predict, I really expect EFF to win. It must rule the whole country. We do not want it to just win this province [Gauteng] because it will be difficult to measure our success if we are not fully in power, as is the case with the DA. I registered a long time ago and I do encourage other people to register so we can see change.

I think EFF will do a lot. So many people are struggling. They are poor and unemployed so I think he will change the lives of people. I believe that if he wins we will get jobs and the education we need. Iâ€™m confident he will go to parliament and we will win the elections, but the only thing that will make him lose is corruption in the voting system. It is only now because of EFF that I decided to register to vote because I have not been voting over the years.

I support EFF because I am looking for change. I do have a lot of expectations, especially in job creation, fuel and the sharing of wealth. I believe 100% that he is going to make it to parliament because the majority of his supporters are the youth which make up the largest number in the countryâ€™s population. With these elections though, I think he will win a few provinces like Limpopo, Gauteng and Northern Cape.

I came to support because Malema is new and young, so I think he will do a lot of things, unlike the old parties. I like the fact that he puts the poor first. I believe he will go to parliament and the ANC fears that. That is why they also had a rally not very far from this stadium. I have registered and I am hoping that we will win. If not though, we will probably come second. I think Limpopo, Mpumalanga, North West and Gauteng will belong to EFF.

As a country we are still stuck. Education and information is not sufficient for our people. EFF has seen the gap and they are on the ground, unlike the ANC which is not in touch with the needs of the people. We do not need a government that is selfish like the current government. They do not want to empower other people and they reserve positions for their relatives and girlfriends. That is why there is too much of a gap between the rich and the poor. Opportunities are given to foreign people because our people are not qualified and the government is not doing anything to educate them. So I am basically here to hear the manifesto and see where I fit, then Iâ€™ll decide, but I do believe in the party and I think it deserves a chance.

Kamogelo Legodi, 24, Ivory park
I like it, and all that he says I honestly believe in. The ANC has been promising but it never delivers. Where I stay the roads are not proper, nothing is. I want to give him a chance and vote for him. Even if he fails at least we would have given him a chance. We will never know if we do not. Then we can change and vote for something else. He also talked about e-tolls, fixing our houses and increasing salaries, which are the things we want. He will win and go to parliament. The turnout of this rally speaks for itself. Xhosas, Zulus, Vendas Sothos are all following him, so the party so is for everyone.

We are very sad. We have been voting for other parties like the ANC but there is no change. I have lived in a shack since 1994, so I really want to see what Malema is going to do for us and I fully support him. I believe that the job creation EFF promises will be a reality, unlike the ANC that has forever been promising but not delivering. He is going to win because most of the supporters are the youth and they will vote and convince their parents to vote for him too. I have registered and Iâ€™m sure that Malema is going to parliament because I have seen people from the Eastern Cape, Mpumalanga and Venda as well as Tembisa residents, so yes, he has a lot of support.