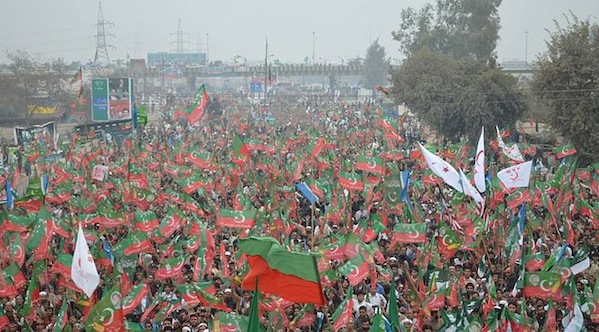 Pakistanâ€™s ruling government is facing aÂ political crisis. Back in South Africa, expatriate Pakistanis have little alternative but to watch as the situation unfolds.

â€œWe are supporting Imran Khan, because we want change. We already tried this prime minister two times, and thereâ€™s nothing,â€ said Naveed Raja, from behind the counter of a cellphone shop in Cape Town.

Raja is referring to Nawaz Sharif, who was elected as the government leader for the third time last year. But opposition figures, including cricketer-turned-politician Imran Khan and religious leaderÂ Tahir-ul-Qadri, have contested the elections and accusing Sharif of voter fraud.

Khan has called for Sharifâ€™s resignation, but the prime minister has refused to relinquish control of the government. Over the past three weeks, protestors have taken to the streets to demonstrate against corruption and poverty.

But Pakistanis living in South Africa are far removed from whatâ€™s happening at home.

â€œIâ€™m not so much in there, so I donâ€™t know what they are doing. I donâ€™t even know if I can vote from here,â€ said Haider Ali Malik, a 42-year-old cellphone retailer from Lahore who has lived in South Africa for the past 15 years.

Last weekend, the protests turned violent as thousands of Pakistanis marched to parliament and the prime ministerâ€™s residence in Islamabad, armed with wooden clubs and wire-cutters. Police launched a counter-offensive, which killed three demonstrators and left hundreds injured.

â€œI saw [the protests] and I was feeling so bad. Itâ€™s not only me, I think each and every one that saw those things, theyâ€™re not feeling good,â€ said Shafiq Muhammad, another Pakistani living in Cape Town. â€œPeople donâ€™t have jobs there, [there are] some many people there with no food to eat, and I feel bad,â€ said 32-year-old Muhammad Abbas, who works as a barber in Cape Town to support his wife and children back in Pakistan.

On Friday, talks between the Pakistani government and the opposition resumed, with the leaders attempting to find a solution to the political chaos. The negotiation process is centred around Khanâ€™s demands which include the prime ministerâ€™s resignation, a new election and the implementation of electoral reforms.

But reports indicate that the government has accepted five of Khanâ€™s six demands, and the opposition may be willing to back down on its demand for Sharifâ€™s resignation.

After years of living in South Africa, many Pakistanis may have lost confidence in the political landscape in their home country. Still, they hold on to the hope that whoever is in government will get back to the business of improving citizens lives.

â€œThey are our people there in Pakistan and we want to protect them. We just want the right people to be in the government,â€ said Ahsan Ullah.