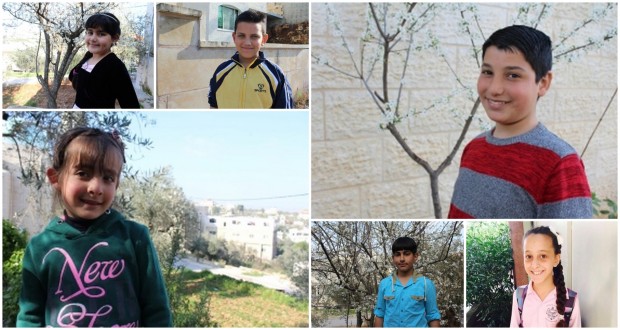 Kids can say the darndest things. And yet, the sweetest darn things. Capturing the sweeter bits can be tough, especially in some places where the narrative almost always revolves around what politicians say. What about the people? What about the kids and their right to say the darndest things? The DAILY VOX paired up with AMAL HAMDAN in Ramallah, to find some of the sweetly darndest of things. We struggled. The kids were just too smart. â€œTell us about your hero, and keep it snappy habibi,â€ we asked them. And this is what they said.

Jenan Ziad, 9
My hero is my mom, she dressed me up nice dress today, I love it. Ahmad Muktaar, 10
I have two heroes. My two older brothers, who are both in Israeli prison, who didnâ€™t go to trial or being charged. Anyway, I miss them. Sajed Khawalldah, 12
My hero is Cristiano Ronaldo. Did you see the new football stadium? I want to be like Cristiano one day, and play my big game in it. Jana Hassan, 11
My hero is HandallaÂ [the young child drawn by Naji Al-Ali in his drawings]. Why he is my hero? Read his story, you will know why. Ahmad Mohammad, 10
My hero is my uncle. I know he is not here, he passed away, Israel killed him. But my grandmother told me so many stories about him. Sally Awad, 8
I donâ€™t know who my hero is, but I think Abo Ammar [Yasser Arafat]; he is everyoneâ€™s hero.