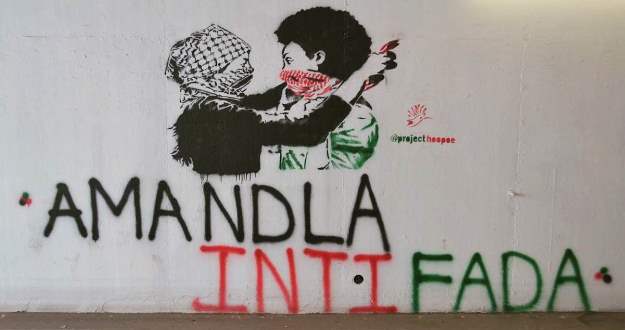 We understand the economic boycott. Money talks, after all. No regime is likely to change until it is forced to, and that often means affecting the bottom line. But an educational and cultural boycott? Many feel that the arts shouldnâ€™t be part of the worldwide BDS campaign against Israel, because intellectual exchange is important and it alienates those working inside Israel for change. But as RIHAM BARGHOUTI shows, art and politics cannot be separated in Palestine, and trying to pretend that cultural exchanges with Israel could ever be acceptable is simply ludicrous.

In November 2015, Adalah-NY: The New York Campaign for the Boycott of Israel, launched a new campaign asking New York Cityâ€™s artists and cultural workers to boycott cultural initiatives by the Israeli government and complicit Israeli institutions.

To launch the campaign, we organized a concert with the Palestinian hip hop group DAM and classical oud player Simon Shaheen, funk/rocker Tamar-kali, and trumpeter Sonny Singh of the bhangra band Red Baraat.

Days after the campaign launch, Adalah-NY released a video of eight prominent artists, all with ties to New York, explaining why they endorse the cultural boycott of Israel.

The video has now been viewed 125,000 times online and over 300 artists have signed the accompanying petition pledging to support the Palestinian call for a cultural boycott.

This campaign being carried out in NY is of particular significance to me. In 1995, I took the decision to leave NY to move to Palestine where I lived for 10 years. During that time I witnessed the gross injustices carried out by the Israeli occupation, especially during the second Palestinian intifada or uprising from 2000-2005. During that time, the Israeli military repeatedly demolished the road between Ramallah, where I lived, and Birzeit University, where I worked. That, along with Israeli curfews, military checkpoints and roadblocks often prevented students and staff from reaching the university. Our students were also routinely arrested, and the Israeli government often denied international faculty visas to enter the Palestinian territories to teach.

As a member of the dance troupe El Funoun, I saw the impact of occupation on Palestinian art and culture. In 2002, the mother of the chair of our board of trustees was shot and killed by Israeli soldiers while she was embroidering on her porch. The house of our choreographer was shelled by Israeli tanks, and one of our members almost lost their baby because his wife was blocked from going to the hospital at an Israeli checkpoint. Other members were prohibited from travelling abroad or were arrested. Attacks against cultural workers like members of El Funoun are ongoing. The group is not allowed to perform in Jerusalem, Gaza, or inside Israel.

For Palestinians, art cannot be separated from politics because the very act of practising and performing is a form of resistance.

Israeli academic and cultural institutions never spoke against the attacks we faced as cultural workers and they failed to support Palestinian rights to education and to artistic freedom. Beyond their silence, many Israeli institutions actively benefitted from and supported Israeli government policies that oppressed us. Some accepted Israeli government funding, spoke in defence of government policies and participated in the Israeli governmentâ€™s official â€œBrand Israelâ€ public relations campaign. This campaign seeks to present Israel to the world as a centre of arts and culture, while diverting attention from Israelâ€™s systematic violations of Palestinian rights. In order to raise awareness about the complicity of Israeli academic and cultural institutions, I worked with a number of Palestinian artists and cultural workers, academics and intellectual to establish the Palestinian Campaign for the Academic and Cultural Boycott of Israel (PACBI) which calls on the international community to boycott complicit Israeli institutions in 2004.

RELATED: Why Haroon Moghul is wrong about BDS, Mandela and the end of apartheidÂ

Despite the United States governmentâ€™s uncritical supportÂ for Israeli policies and the substantial amount of money Israel and its supporters are using to squelch it, the Palestinian-led movement to economically, academically and cultural boycott Israel is growing and moving from the margins to the mainstream. Increasingly, artists are speaking out and endorsing the cultural boycott of Israel. Our campaign in New York for the cultural boycott of Israel takes its place alongside similar campaigns around the world in South Africa,Â Ireland, Canada, EnglandÂ and the United States.

The call for cultural boycott is an integral part of the growing nonviolent, principled Palestinian-led movement for BDS which targets Israel on account of its numerous human rights violations and denial of freedom and equal rights to Palestinians. Though it may seem largely symbolic, the potential impact of cultural boycott is significant.

Not only does it compliment Palestinian cultural resistance on the ground, but it sends a clear message to Israel that cultural workers around the world are refusing to be complicit with Israeli violations of international law. As such, Israel must either end its occupation, colonization and apartheid policies or become culturally isolated from the international community of people of conscience.