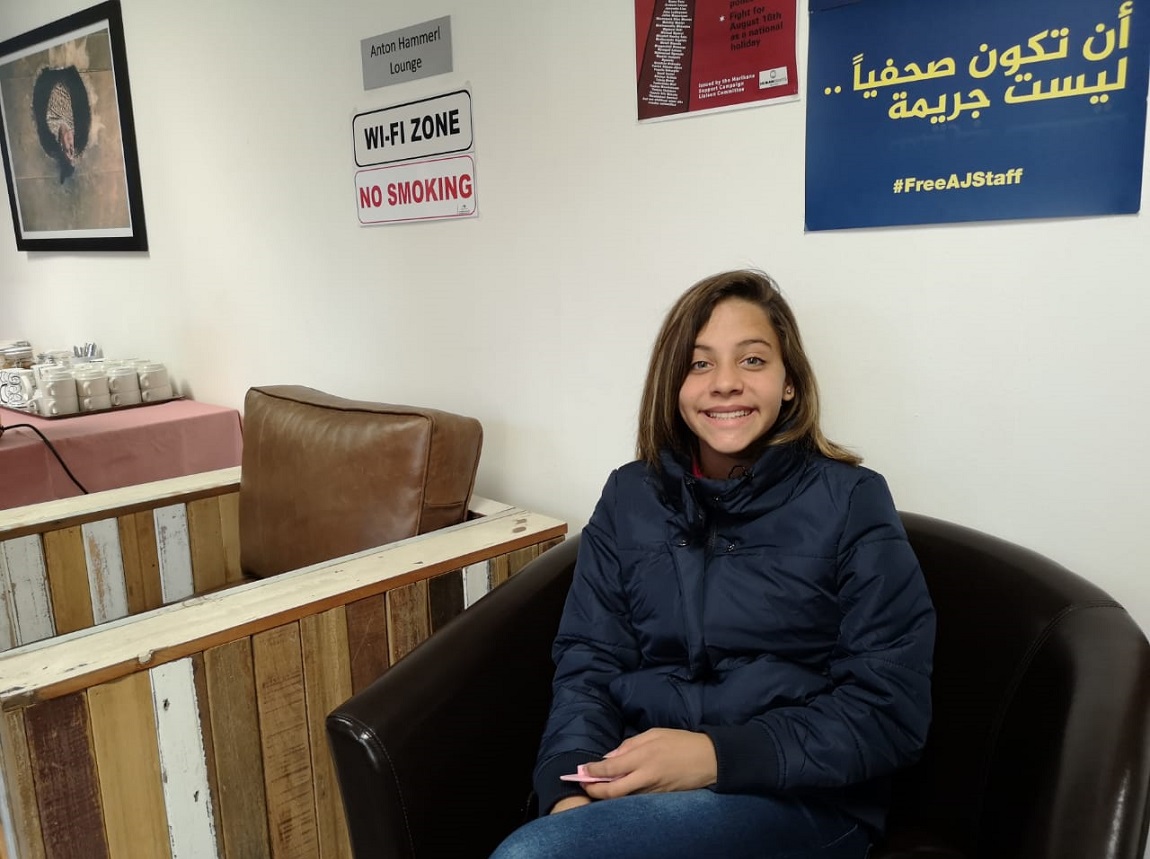 Twelve-year-old Janna Jihad has been labelled the world’s youngest journalist. She comes from the West Bank in Palestine where she uses her voice to speak up about living under Israeli occupation. She is currently touring the country with 2 Suns Shamsaan, a South African arts movement. The Daily Vox sat down with Jihad to talk about the documentary and her journalism.

On Saturday, Jihad will be screening the documentary Radiance of Resistance on Saturday in Johannesburg.

“Actually now it’s not a documentary. We [are] going to be showing a little of my situation of what’s happening in my village and a tiny bit of our issue as Palestinian children living under occupation and our suffering. The documentary is Radiance of Resistance. We showed it in Durban and in Pietermaritzburg. It’s just documenting my life and my cousins life under occupation.”

Jihad said the response to the documentary in Durban and Pietermaritzburg was good.

“They all say they didn’t know that much about the Palestine issue and they liked it a lot.”

This marks the second trip of Jihad’s to South Africa and she says she likes the country as it is a nice place with nice people.

Regarding the current situation in her village of Nabi Saleh in the West Bank, Jihad said: “Now there are a lot of bad things that are happening. For example we have a place in Jericho. It’s a Bedouin camp that [has] a lot of people in. It’s a really small place and before a week they raided and wanted to demolish all of the houses and all of the things that were there. And even the school got demolished more than once and it’s now built with car tyres and mud because they don’t allow them to build it with rocks because otherwise they are going to demolish it. They are trying to demolish the whole thing because it is a really strategic area. It’s in between Jericho and Jerusalem so it’s a really strategic area and they want to build. In that area, they’re going to demolish those houses and those tents and in it they are going to build settlements there.

Jihad’s cousin, Ahed Tamimi was arrested in December 2017 on charges of assaulting an Israeli soldier. She is currently serving eight months in prison.

Who is Ahed Tamimi and why should South Africans care?

“Ahed is really good. She is studying in jail right now. She is actually coming out on the 29th of July,” Jihad told us.

Jihad uses her social media platform especially her Facebook page to spread awareness of what it happening in Palestine. On Tuesday, she posted a video interview she had done with Economic Freedom Fighters’ president, Julius Malema.

On the experience, Jihad said she met him on her flight from from Durban to Joburg

“It was really amazing. I learned a little more about the relationship between Palestinians and South Africans and it was amazing,” Jihad says about the interview.

Talking about her future, Jihad has clear plans about what she wants to achieve.

“I want to be five things. First thing I am going to study political science, journalism, art and fashion designing and I am going to be a soccer player. I’ll play for Palestine or Barcelona,”

Jihad is a huge Neymar fan and she was supporting Brazil in the World Cup, but sadly no not that the Samba Boys have been eliminated from the tournament.

As for her hopes for the future of her land, Jihad wants liberation.

“Of course to liberate Palestine. To live in a freedom, justice, equality and peace. To live as every child lives in the world. To see a free Palestine because Palestine is a land that has never seen peace before. We just want to live in peace.”

Her message for people in South Africa and the world: “I want to tell them that we are the next generation that can free Palestine and free the world from the negative thinking so let’s unite, let’s stand hand-to-hand to make this world, a world of peace and equality to free Palestine. To let those children live in freedom,”

“As I said, let’s unite. Second they can do a lot of things like supporting us in our campaign Shamsaan that’s making a platform for Palestinian children. To send their message and we focus on that thing with human rights. They can join us and be a part of it. Also boycotting Israeli products because their money goes to Israel and Israel buy weapons with that money they gave. And Israel kills us with those weapons. There a million ways of resistance from singing, dancing from activism and whatever. Everybody can create his own way of resisting,” Jihad says.

Jihad says the Israeli government regards her as a threat to the security of the country because she is trying to spread the message of what is happening.

“Because of me just trying to send the message from my house and for how racist they are, they said because you are looking like a European and not looking Palestinian.”