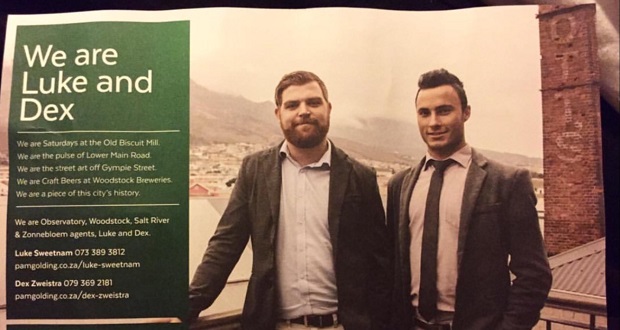 An advertisement by real estate company Pam Golding is drawing attention – for all the wrong reasons.

While the â€œI Am Pamâ€ campaign – introducing the main realtors in each suburb to potential buyers in the area – is meant to be one that enhances personal touch and a sense of community, the advert is coming under fire for promoting gentrification and whitewashing the essence of the Woodstock, Observatory, Salt River and Zonnebloem areas.

The phrase â€œwe are a piece of this cityâ€™s historyâ€ is kind of ironic, with the ad listing visits to hipster joints and street art as history – ignoring the apartheid legacies of these spaces.

This comes in the wake of the debates around gentrification and the evictions in the Woodstock area – particularly in light of the Bromwell Street evictions, which left 43 people homeless, 19 of whom are children.

â€œOur communities are being destroyedâ€, Charnell Commando, a Bromwell Street resident of 29 years who was facing eviction, told The Daily Vox, â€œI could have walked from here to the shop to buy potatoes or onions or whatever they sell, but now they (developers) are buying these shops, they modifying the shops. You canâ€™t just go and buy a packet of potatoes for R5, because theyâ€™re going to have a boutique there thatâ€™s selling dresses for R1,000.â€

Not in my Neighbourhood: Cape filmmaker tackles gentrification and spacial violence

A few tweeps subverted the â€œWe Areâ€ refrain in the advert, to highlight the absurdity of the way that the ad ignores glaring issues, and showcases peak whiteness.

Should say “We are White Capital Monopoly” “We are Neocolonialism” “We are responsible for evictions” “We are keeping CT rich and white” https://t.co/J7mfg3ZYCY

Back in 2014, The Daily Vox visited and spoke to residents in Woodstockâ€™s Page Lane. Woodstock, on the outskirts of the Cape Town CBD, has become one of the trendiest parts of the city. The area is a cultural hotspot where dilapidated buildings sit alongside stylish restaurants and art galleries. The Woodstock Exchange has been lauded for its contemporary design motif, while the Old Biscuit Mill has remained one of Cape Townâ€™s best Saturday brunch locations. But all these improvements are said to have come at the cost of the community.

This year, Cape Town filmmaker, Kurt Orderson, who has been documenting protests against eviction and gentrification near the Old Biscuit Mill told The Daily Vox, â€œThe Biscuit Mill is the epicenter of escapism, of this nostalgia of privilege and the kind of glorification of privilege and material wealth. This is what Cape Town represented during the glory days of apartheidâ€.

@RhodesMustFall Spot the difference? Colonization is as colonization does. pic.twitter.com/TLwVB8b9qi

The estate agent pictured in the advert, Luke Sweetnam, said he thought the advert was misinterpreted. Sweetnam, who sells property in Observatory, Woodstock and Salt River, said: “With this marketing campaign we have chosen to highlight some of the iconic landmarks and attractions in the area.” The campaign has been running for six months.