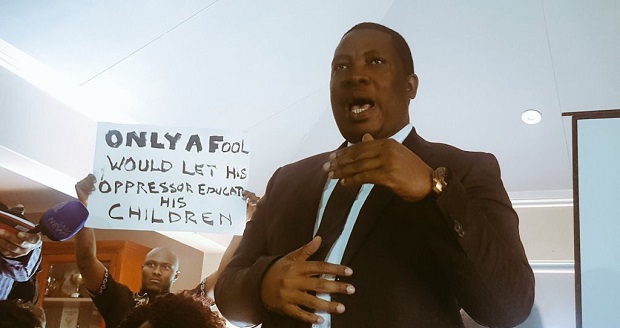 Pretoria High School for Girls will be investigated by Gauteng Department of Education authorities following allegations of racism against the institution.

â€œYou have my support, I will protect you,â€ said Gauteng MEC for Education Panyaza Lesufi to emotional pupils during his address at the school on Monday morning. Lesufi, together with officials from the national and provincial education department and Tshwane mayor Solly Msimanga, visited the school after allegations of racism surfaced against the institution and pupils wrote a petition to the MECâ€™s office requesting intervention over racist victimisation, racist incidents, and the school code of conduct in relation to hairstyles.

Girls from the school protested on August 26 and 27 and took to social media using the hashtag #StopRacismAtPretoriaGirlsHigh to highlight the prejudice theyâ€™ve experienced from the school and staff. The hashtag quickly went viral, with many tweets adding their voice in support of the protest and highlighting racism in other schools too.

Parents and supporters of the girls, including former pupils and students from the University of Pretoria gathered outside the school on Monday morning to show solidarity with the students. They were met with closed gates, armed police and security personnel, while staff at the school were instructed not to do anything and carry on as normal.

â€œMy sister has gone through a lot of bullying, sheâ€™s had to change school three times because of her hair. Other children would laugh at her and say, â€˜Oh my god, your hair looks like a cabbageâ€™. It broke my heart. Sheâ€™d cry everyday when I picked her up from school. Sheâ€™d get home and cry because of how she was treated because of her hair, and say that the school said her hair is a distraction and called it exotic,â€ said Amira Patel, the older sister of 13-year-old Zulaikha Patel.

â€œThis is disturbing because the girls are very traumatised. Theyâ€™ve proposed that all the teachers that are implicated to be investigated and some kind of disciplinary hearing taken against them,â€ said Bodibe.

The girls also suggested that the school policy and code of conduct be changed.

Some of the allegations raised by the girls include being called a â€œdirty kaffirâ€, being compared to a cartoon character and dividing pupils into ethnic groups in class and justifying it as a geography exercise. According to one pupil, the teacher didnâ€™t face disciplinary action but was referred to attend a course which was supposed to remedy the situation.

â€œThereâ€™s a lot of issues that have been building up to this. One issue is regarding a Grade 8 [pupil] with big hair. She got reprimanded for her hair and everybody was just like, â€˜weâ€™re tired of everything, weâ€™re tired of not being heard. We started a hashtag to try getting external attention. Because they [school management] are just going to give us more disciplinary hearings, nothing is going to change or be resolved,â€ grade 12 pupil Amanda Kwele told The Daily Vox.

â€œTeachers who know that they are in a position of authority use that to discriminate against us and say derogatory things against black girls and expect us not to say anything or raise our voices because they know they are in a place of authority. With that being said, they always tell us that weâ€™re overreacting to the things that theyâ€™re saying. Itâ€™s a painful experience because as a learner, you think that you are equal to other learners around you but youâ€™re treated very differently,â€ said Kwele.

Girls are being led out the school by grade and class by the guards #StopRacismAtPretoriaGirlsHigh pic.twitter.com/Uo64LEOUGG

She added that black teachers at the school are concerned about keeping their jobs, therefore pupils understand why they wonâ€™t really be vocal about whatâ€™s happening – â€œThey have children and they need to keep their jobsâ€.