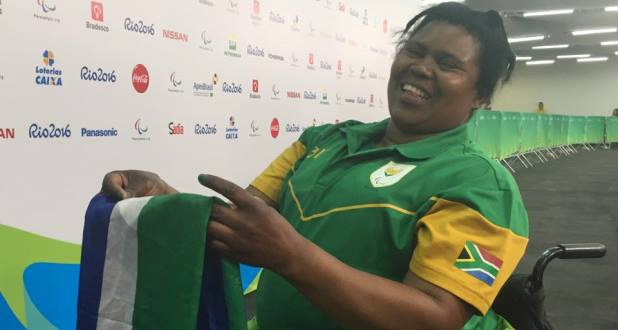 South African record-breaking veteran athlete, Zanele Situ, grabbed a bronze medal in the Paralympics this week, bringing our medal tally up to eight. Despite her incredible feats on the field, few people actually know the shy and modest javelin and discus thrower. The Daily Vox chatted to her before she set off for the Games.

This is Situâ€™s fifth Paralympics â€“ she won gold and silver in 2000, becoming the first black South African woman to win a gold medal while smashing the javelin world record at the time. Four years later, in Athens, she hung onto the title of javelin Paralympic champion.

This year, she broke her own personal best, with her javelin hitting the 17.90m mark.

Zanele Situ won Bronze in the women’s Javelin F54 with a PB 17.90 #teamSArise

Higher and higher we go !! pic.twitter.com/PIBLlkUFag

Like many people looking for a better life, Situ, originally from Kokstad in KZN, used the sport to keep her away from the ills of society. She got into sport while at a school for the disabled. Since then, the 45-year-old has never looked back.

Situ said it was love from the moment she started throwing.

â€œI met them (teachers and coaches) when I was at the special school so I joined there. I really did love them because they were keeping me away from mischiefâ€.

Sport has ensured she stays on the right path.

â€œI enjoy sport because there is less time to be involved in fights, drugs and just bad things in general.â€

Being an athlete is so much more than just the sport for Situ, who explained that she gets into her zone when she trains. The shy athlete doesnâ€™t focus much on achieving accolades and winning medals, but rather enjoying what she is doing.

Well, weâ€™re pretty sure that when Situ gets home sheâ€™ll see that her fans have only good things to say about her.

Zanele situ has been to the Paralympics since 2000 and she still pounds #medals. #bronze this time in 2016. She’s phenomenal. ðŸ‡¿ðŸ‡¦