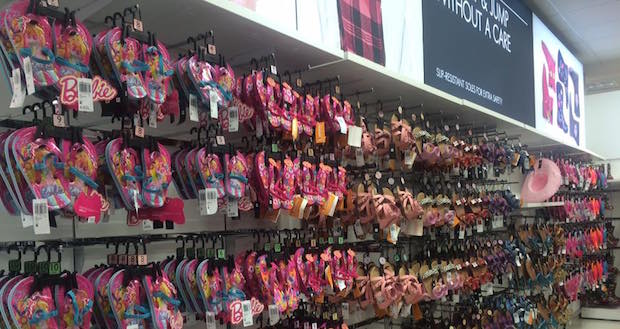 A frustrated mom, Paula Chaplin probably didn’t expect her Facebook post on the lack of diversity in Woolworths’ toddlers’ clothing to blow up like it did. But just over a day after Chaplin put up the post, it has been “liked” over 11,000 times, shared more than 1,700 times and racked up more than 1,000 comments.

Dear Woolworths. I thank you for the range of clothes you have on sale for my toddler. But I think maybe you’ve…

She ends off saying, “I’m so sick of this gender stereotyping! Come on Woolworths – do better!”

Other parents – of girls and boys – soon chimed in.

“Can’t dress my 7 year old daughter at Woolies anymore either. At the start of winter it was all black, lace and high fashion. Even the tracksuit tops were cropped!” said Elodee Haupt.

“I was in woollies the other day and saw a padded bra for a 7-8 year old….I was horrified,” wrote Kaylee Vermeulen.

“This is how I feel! Even now. With boys at ages 9 and 6! Why can’t I find them pj’s that are just comfy and soft with NOTHING on the shirt! Must they think about batman or wrestling even when they are peacefully in their beds? I hear you frustration! And I totally identify with it!” said Janice Roberts.

“Please, please, please listen to all these frustrated parents,” commented Sandra Lallemand. “I refuse to buy Disney clothes and gender-stereotyped colours, and don’t even get me started on sexualised kiddies clothes. Even flipping Target has done away with “boys” aisles and “girls” aisles.”

Lallemand was referring to US retail company Target’s recent decision to do away with the “Girls” and “Boys” labels in its toy department.

Writing about the decision in the Washington Post recently, Rebecca Hains said that gender stereotypes and gendered marketing are passÃ© and that “the decision from the second-largest discount retailer in the US signals a real cultural shift.”

It’s a cultural shift that Woolworths appears to have been slow to catch on to.

For years now there has been a growing move away from stuffing children into little gendered boxes, which you can see in campaigns like Pink Stinks – which targets the products, media and marketing that prescribe heavily stereotyped and limiting roles to young girls – and Let Toys Be Toys, and its offshoot Let Books Be Books, which are asking the toy and publishing industries to stop limiting childrenâ€™s interests by promoting some toys and books as only suitable for girls, and others only for boys.

Another campaign, called #ClothesWithoutLimits, aims to fight what it sees as the limits retailers put on children’s ideas of what they are supposed to be interested in.

Similarly, the highest funded children’s clothing project in Kickstarter history is Princess Awesome, a project that focuses on creating clothing for “a different kind of girly girl because girls shouldn’t have to decide between dresses and dinosaurs, or ruffles and robots”.

The parents who are now complaining about the gendered commercial world we inhabit were born in the 70s and 80s, when children’s clothing and toys were more neutral. As a little girl, I recall wearing mainly red, blue and – my favourite – mustard.

This Lego advert from the 80s has been doing the rounds this year as an example at how far we’ve come since then. (Back then, nobody prescribed little children’s interests. Today little girls are plied with pink and purple Lego sets featuring cupcake shops and beauty salons.) Hains points out that gender-based marketing only really took off in 1990s when, she says “companies realised they could convince parents of children of both sexes to buy twice as much stuff by introducing gender segmentation to kidsâ€™ products.”

As for that old pink/blue binary, it may surprise you to know that this delineation was a product of the 1940s. Before then pink was considered a more manly colour, and little boys were draped in the stuff, while blue was considered to be a more genteel colour, suitable for little girls. Earlier than that, little boys and girls were dressed identically from birth until the age of 7, when boys were “breeched” and put in trousers for the first time. (This explains why girls and boys alike were – and still are – Christened in little dresses.)

So the “new normal”, where you enter a shop and are confronted with 50 shades of pink, is just that – relatively new, and certainly not immutable. It’s not like there aren’t alternatives. Many of the commenters on Chaplin’s post have been throwing out suggestions to others to shop at stores like Cotton On, Earth Child, Ackermans and Pick ‘n Pay.

But we – and certainly Woolworths – can still do better. Parents looking for a t-shirt for their pink-obsessed son or for matching pyjamas for their pigeon pair shouldn’t have to run from pillar to post to find what they’re looking for.