Home Accountability People are dying in Joburg building fires and no one seems to...
WhatsApp
Facebook
Twitter
Email
Print 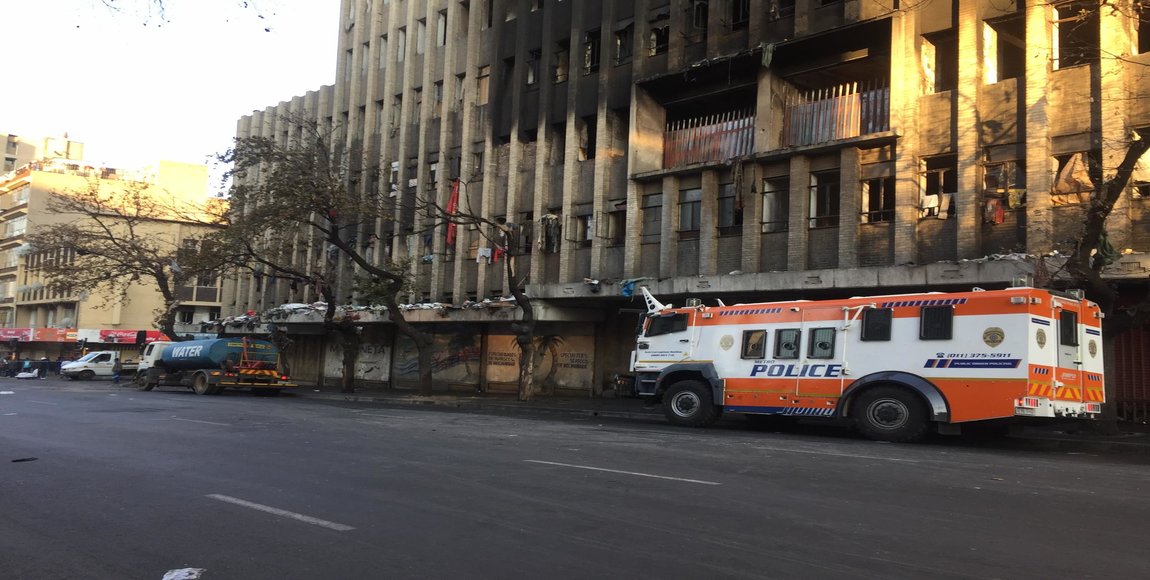 Officials appear to have washed their hands of hijacked buildings in the Joburg CBD, leaving poor and vulnerable residents to live in dire conditions at the mercy of unscrupulous rent collectors. On Wednesday, a fire broke out in the Cape York building, leaving dozens injured, several people dead and many homeless. Now residents are asking what the City is doing to provide decent accommodation in the inner city.

The Cape York building caught alight on Wednesday morning. Residents were seen hanging out their windows by their bedsheets; at least one person jumped to the street below. Fifty people were rescued; seven died in the blaze.

Residents remained on the streets until late in the evening, waiting to salvage what they could from the ruins, many of them furious at being prevented from re-entering their homes by the Johannesburg Metro Police.

#JHBFire One person passed away after jumping from the building, while six others burnt to death or died from smoke inhalation, EMS say. SM

Police spokesperson Ivan Perumal said the building is being treated as a crime scene.

â€œWe donâ€™t know what caused the fire. Currently residents wonâ€™t be allowed to occupy the building. The forensic experts will only be attending to the scene in about two days,â€ he said.

The building, which originally belonged to the Bank of Mozambique, is one of many â€˜hijackedâ€™ buildings in Johannesburg.

According to ward councillor Nokuthula Xaba, the building has no running water, electricity or sanitation facilities, and residents pay rent to an owner who is never seen. Those living in the building rely on candles for lighting and use paraffin stoves to cook and heat water.

Xaba said sheâ€™s tried to communicate with the City on the matter to no avail. â€œI cannot believe that we can allow people to live here without basic services. There has been no response from the City of Johannesburg,â€ she said.

Local residents have long complained of faeces and rubbish that collects outside the building, and of rat infestations and alleged criminal activity in the building which they said was affecting the entire area. In 2013, the Affordable Housing Company, which owns the building next door, succeeded in getting a court order requiring the City of Johannesburg and the owner of the Cape York building to clean up the street outside. But nothing was done. In August that year, the first of three fires suffered by the residents broke out in the building.

The Bank of Mozambique is alleged to have abandoned the building for unknown reasons in 2015.

Xaba said she had searched for the building owner and found it had been sold to an unknown person. â€œThe building is privately owned, and so the City of Johannesburg has a limited role here,â€ said Xaba.

According to Xaba, the building was handed over to Johannesburg Property Company the first time it caught fire. Property management and security officials were placed at the building. Water tanks, refuse removal, electricity and cleaners were also installed. But last year, Cape York caught fire again. â€œFortunately, no one was killed,â€ said Xaba, â€œbut I learnt that those facilities had been neglected.â€

Prince Mthethwe, who has lived in the building for several years believes government and the City of Johannesburg donâ€™t care about the people who live there.

â€œThere are 350 people living here. Thereâ€™s no sanitation or water. We complained to the government. In 2015 they brought JoJo [water] tanks, and security. But they switched it off again. How can we live without water?â€ he asked.

â€œOn the news they say the people who live here are not working, but we have a constitutional right to shelter â€¦ We are applying a case here for these evictions with a pro bono lawyer. We want an alternative place to live. Decent accommodation. We want to have healthy lives. But the government comes here and blames poor people. If the mayor canâ€™t fix the city, they must leave.â€

Moses Mabule, who lives in the building next door, has witnessed each of the three fires that ravaged the building over the last five years. He said Wednesdayâ€™s was the largest and most destructive.

â€œThe fire spread to the whole building. When the fire began, people tried to jump down and I saw someone fall right to the ground, from the fifth floor. I brought my stepladder to help them get down. I saw how scared they were. A lot of the people who stay here are foreigners, and I donâ€™t know who they pay rent to, but they canâ€™t afford to stay anywhere else,â€ he said.

Mabule believes that, without any alternative accommodation, those who have left the building will simply return later, despite the poor conditions. â€œThere are people still in the building even though there was a fire there just now. There are children in there,â€ he said.

I call on the Cape York “Myamandawo” building that cost the lives of 7 people to be demolished. I visited the place – it’s hazardous. pic.twitter.com/wn1LUbRYuX

In the early afternoon, Xaba sent messages to City officials enquiring about plans to house those affected by the fire for the night. They had not responded by sunset.

â€œThey have said nothing to my questions about where these people will go tonight. I asked officials where they will sleep, what will be done? But Iâ€™ve received no answer. The head of police, Brigadier Perumal, said that South African Police Services may be able to communicate with NGOs to assist. What is being done to house those affected?â€

The Daily Vox has reached out to the Johannesburg Property Company and the City of Johannesburg for comment. The story will be updated once they are received.