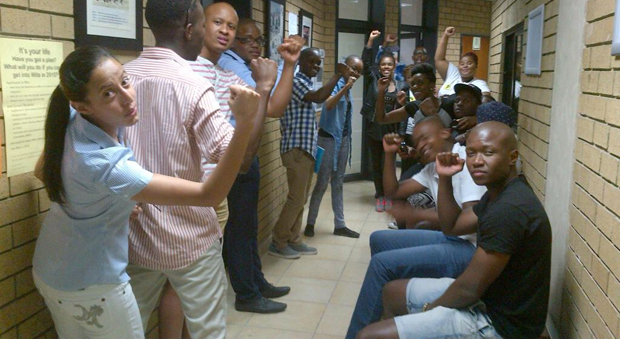 I was on the Wits University campus late last week to sort out a couple of things for the forthcoming academic year, and went past the Student Representatives Council (SRC) offices to chat to a few of my friends there. The day I went happened to be an appeal deadline day â€“ by 4pm, all the appeals of excluded students from the Humanities Faculty had to be submitted, so there was a scrum of students seeking assistance at the eleventh hour.

I was thrown into the thick of it all â€“ Iâ€™ve always maintained that you cannot live in isolation from the issues around you, so when help was needed, I took off my journalist hat (for a while at least) and jumped right in. With about half an hour to spare, there was an influx of students who needed assistance drafting letters before lodging their official appeals.

I helped a first-language Zulu speaker who had come in with a letter drafted in English that she clearly hadnâ€™t written herself.

But the Wits Readmissions Committee, which decides on appeals, would not take her appeal seriously if she had not written it herself. I was not even aware that this requirement was an official policy â€“ and neither did an SRC member who was with me at the time.

Apparently, this is because the studentâ€™s appeal needed to be ‘sincere’, as she would be fighting the case on her own.

I interacted with several people dealing with issues that really not of their own making; issues that impacted their lives to the extent that they had become excluded. These included AIDS orphans, 20-year-old sole breadwinners/full-time students, and people who were in debt to the university because the person paying their fees had passed away during the past year. These were just some of the people filling up the benches outside the SRC offices.

Late last year I happened to sit next to someone in a computer lab on campus who was typing an email that looked rather urgent. He seemed nervous as he was typing, and kept on erasing and typing the same things. Curiosity got the better of me and I peeked over his shoulder, to find that he was typing an email to The National Student Financal Aid Scheme (NSFAS) asking when he would receive his stipend so he could buy food.

You get a healthy dose of perspective when you come into contact with fellow students facing circumstances so far removed from your own. Although itâ€™s easy to sympathise, thereâ€™s not always a whole lot you can do to change the way things are. That said â€“ Iâ€™m a big believer in Ubuntu: â€œI am because we areâ€. At the risk of sounding preachy, being an active citizen is a duty, and I do what I can to make a difference in the student community I am part of.

I always used to think that the reason people failed was if they were â€œstupidâ€ or never did their work; I thought that if they were facing exclusion it was their own doing.

Let me admit that my experience in the SRC office last week has changed my mind. I understood that living in a cocoon is no way to live.Â It is arrogant and only sows seeds of intolerance and misunderstanding.

Being conscious of whatâ€™s going on around me and seeing what I can do to contribute to help improve society is something I now view as an obligation â€“ not merely a gesture of goodwill.